100 years of service, beauty and commitment 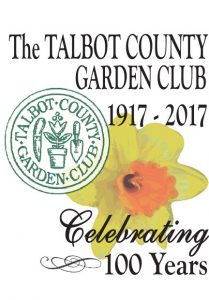 This is the first in a three-part series on the history and accomplishments of the Club.

In 1917, 10 men and women in Talbot County decided it was time to establish a garden club. They were a determined group whose initial focus was on developing new gardens, as well as restoring old ones and protecting the beauty of the Eastern Shore. Mrs. Betsy Spring was the Club’s first president.

One of their first projects was the elimination of billboards along US Route 50, a cause that spanned some 14 years and resulted in the elimination of approximately 21,000 signs. It was a stunning victory for the group and continues to contribute to the unobstructed views visitors enjoy when driving through Talbot County.

With the advent of WWI, many of the male members went off to war and the women became engulfed in work supporting the war effort, so the club was disbanded until 1924. When the Club resumed, the decision was made to limit membership to 50 active members, “true dirt gardeners,” a decision that still stands today. Later, an associate category of membership was added for those wishing to reduce the number of hours spent on Club work.

Another early project of the Club that lasted decades was landscaping the Talbot County Courthouse. In 1926, 1,120 boxwoods, propagated by member Ernest Hemming from cuttings from Ratcliff Manor, Fairview and Perry Hall, were planted around the courthouse. Ernest also replaced the iron fence.

The Talbot County Garden Club is attributed in several historical articles as the impetus for the Maryland House and Garden Pilgrimage. In 1930, the Club, along with the Four Rivers Garden Club in Annapolis, began exchanging visits to gardens in their respective areas. Over time, the visits grew to what is now a yearly statewide event, with the gardens in Talbot County being among the most popular.

Proceeds from the Pilgrimage are used for projects throughout the county. For instance, in 1942 an effort was launched to recreate a colonial town around the Courthouse and the Garden Club used proceeds from the Pilgrimage to help renovate buildings along Washington Street. Money was also donated to restore Dr. Stevens’ house, which became the headquarters for the Talbot Historical Society. The award-winning gardens of the Talbot Historical Society remain a priority of the club.

Over the next 10 years, the Club planted a permanent Christmas tree for the Town of Easton and approached the state roads commission about saving trees destined to be ripped out for road construction and widening and participated in beautification projects at the old Coca Cola plant and Easton High School.

Between 1942 and 1967, the Club experienced tremendous growth in projects. A junior club was established to encourage interest in gardening with children, plans were made to beautify the approaches to Easton on Route 50, the Club planted shrubs at the hospital and donated funds for trees and shrubs to be planted at the State Police barracks plus a host of other projects.

As the Club grew, its objectives were also revised to include promoting knowledge of gardening and the art of floral arranging; aiding in the protection of the natural beauty and wildlife on the community; encouraging civic planning and planting; and supporting efforts to conserve America’s natural resources.

The Club began entering award contests and used its winnings to help landscape the new Ag Center and Oxford Park, as well as to add gardens and plantings to the Historical Society garden.

In 1950, plans were being made to build the Bay Bridge, which promised to forever change the face of the Eastern Shore, and the next 25 years would see the Club become much more active in environmental issues, begin offering flower shows in horticulture and design and continue to contribute to the renovation and beautification of the area as it grew.