Quenching summer thirst can be quite an emotional experience for those parched by the intense summer sun on the Eastern Shore. While most of the time ice water will do the trick, sometimes we long for something even more satisfying. Desperate for hydration on a searing June day, nothing elicits a more emotional response than the sight of a lemonade stand tended by young entrepreneurs capitalizing on the heat of the day. I was one of those young entrepreneurs many years ago, setting up shop in front of my grandparents’ home. I can still remember the excitement my stand triggered by innocent passers-by and how they just couldn’t say no to a glass of lemonade in 90-degree heat. I never thought much about the origin of lemonade as a child, but I did love the jiggling sound of quarters in my pocket.

Lemons originated in Asia and the first written evidence of lemonade consumption comes from the writings of a Persian Poet in the 12th century. However, it wasn’t until the 18th century that it made its way to America via Europeans who had developed a fondness for it. Lemonade became quite newsworthy during President Hayes tenure at the White House (1877-1881) when his wife, Lucy Webb Hayes, served it in lieu of alcohol, thus giving her the nickname “Lemonade Lucy.” On the nutritional side lemons, with their high concentration of vitamin C, have been used for centuries to ward off scurvy in sailors.

A Recipe For Lemonade

“For a Summer Draught: The juice of one lemon, a tumblerful of cold water, pounded sugar to taste, half a small teaspoonful of carbonate of soda. Squeeze the juice from the lemon; strain and add it to the water, with sufficient pounded sugar to sweeten the whole nicely. When well mixed, put in the soda, stir well and drink while the mixture is in an effervescing state.”

Combine the lemon juice and sugar and stir vigorously until the sugar is mostly dissolved. Add the water and stir. Grind strawberries in a blender, strain, and add to the lemonade. Serve over ice and garnish with a fresh strawberry or lemon wedge, or both.

If lemonade doesn’t tickle the taste buds, perhaps its summer rival, iced tea, will do. Throughout American history we have had a love/hate relationship with this English staple. Tea, for many centuries, was always served hot until Americans mucked it up with ice in the mid 1800s. Often times tea punch, served in colonial times, was laced with a little something extra like rum to take the edge off. But ice was a luxury until 19th century global ice trade made it widely available, even in the southern states. Iced tea recipes are found in print in the late 1800s but its real popularity gathered strength at the 1904 World’s Fair when hot summer weather inspired one tea tradesman to pour his hot tea over ice. It was refreshing, new to many and an instant hit.

Iced tea’s popularity continued with the invention of the home refrigerator and freezer in the 1920s. Today, 85% of all tea consumed in the United States is sipped cold. Whether you like green tea, black tea, fruit flavored or Southern, one thing is for certain: it tastes marvelous on a hot summer day.

Place tea bags and baking soda in a large heat proof glass pitcher. Bring water to a rolling boil and immediately pour over tea bags. Make sure tea bags are submerged. Cover and steep 7 minutes. Remove tea bags without squeezing and discard. Add ice and stir until ice is melted. Stir in simple syrup and serve over ice.

If your summer thirst requires extra zing, look no further than a flavorful and refreshing pitcher of Sangria. It is generally believed that the word Sangria is derived from the word sangre, or blood. Traditional Spanish Sangria is made with red wine, fruits, orange juice and brandy and the variations are endless. The Spanish are very particular about their Sangria – and they should be, they invented it. In 2014, under European Union law, the use of the word Sangria became restricted under geographical labeling rules. Only Sangria made in Spain and Portugal is allowed to be sold as “Sangria” in Europe. If it is made elsewhere its origin must be placed in front of the word “Sangria.” So, as to abide by European law, I give you my recipe for:

1 small sprig of rosemary, leaves removed from the stem and chopped.

1 bottle of white wine, chilled (I use Sauvignon Blanc)

Combine the sugar and water in a small pan and cook on stovetop until sugar is dissolved. Let cool. Add a few ice cubes to speed up the process. In a mortar and pestle place three of the apple mint sprigs and the rosemary leaves and muddle or “bruise” the herbs until their fragrance is released. Add the herbs to the simple syrup and pour into a glass pitcher. Pour in the chilled bottle of wine and the triple sec. Peel and slice the peach and add to the pitcher along with the raspberries. Stir gently. Refrigerate at least six hours. Garnish with the remaining mint sprigs. 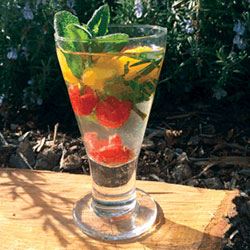