Featured
1 month ago by Jennifer Latham
0

Luck & Love Homestead is in the Main Street district of historic downtown Denton. Owned by husband and wife team, Taylor Hale and Leslie Grove, it started as a local retail outlet for their Night Kitchen Coffee and Spice Blends but rapidly grew to be more. The motto of “farm goods for the curious cooks” describes both the retail offering at the shop as well as how they live day to day. In the shop, find the prepared food from Eat Sprout (Denton’s only “Sproutlet”), seasonal vegetables, dairy, and frozen meats all from local farms to go with Kombucha from Federal Brewing, and the coffee roasted on site by Night Kitchen Coffee. 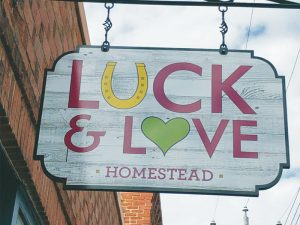 Night Kitchen Coffee was started by Leslie and Taylor in 2014. Night Kitchen custom roasts specialty, direct trade coffees to the peak of flavor and aroma in small batches and to order. In addition to coffee, Night Kitchen produces a series of unique spice blends and seasonings in house using the best ingredients possible. By keeping all aspects of the production in house, Night Kitchen holds the highest possible quality.

Beginning in late 2020, Luck & Love Homestead will start offering crafted baked goods, soups, salads, and more that are prepared on site using local and seasonal ingredients and highlighting culinary traditions from around the globe. Their goal is to provide a unique carryout option as well as providing provisions to the beach bound.

Cinnamon is a Star

Night Kitchen produces a series of unique spice blends and seasonings in house using the best ingredients possible. Both Taylor Hale and Leslie Grove are constantly delving into the history of food and sharing the connections and stories it reveals. Here, they have provided a sampling of cinnamon’s history and popularity.

Cinnamon is the inner bark of an evergreen tree with the best quality coming from the main trunk. True cinnamon is native to Sri Lanka, India, and Myanmar while the Cassia varietal comes from China. Cinnamon was used medicinally in China as early as 2500 BC and, along with black pepper, is one of the earliest spices traded. Emperor Nero is said to have used a year’s supply in the funeral pyre of one of his wives.

Spice traders kept the origins of cinnamon a closely guarded secret spinning stories of it being harvested from the nests of giant cinnamon birds. In the middle ages, the Portuguese and then the Dutch controlled the trade and farming of cinnamon from Sri Lanka while the British East Asia trading company established farms in India.

In cooking we often think of cinnamon in sweets like cinnamon rolls, apple pie, and more. The U.S. tends to prefer the cassia cinnamon from China because it is slightly sweeter than the true cinnamon from Sri Lanka. True cinnamon has an incredibly important role in savory dishes from around the world. From the complex mole sauces of Mexico to Moroccan stews and throughout Arabic cooking, cinnamon is a star. Cinnamon’s flavor compounds are rich and diverse, fitting for one of the oldest spices in the cabinet.

1 fresh jalapeno finely minced (optional, you can replace this with a pinch of red pepper flakes)

Combine the water, vinegar, sugar and salt in a non-reactive pan and bring barely to a boil. Add all the other ingredients in a non-reactive jar with a loose-fitting lid (a pint and half Ball canning jar works good here). Pour the water vinegar mixture over the onion and spices and allow to cool to room temperature. Fish out the cinnamon stick and bay leaf and refrigerate.