From our 21st century viewpoint, it can be hard to understand why police and oyster pirates battled so often. We wonder why pirates were set free to continue their rampage while police boats were fired upon and sometimes captured, and no one was held responsible. We are amazed when we read of the sheer audacity of oyster pirates, and the violence among dredgers and tongers and their almost universal dislike of the oyster police. 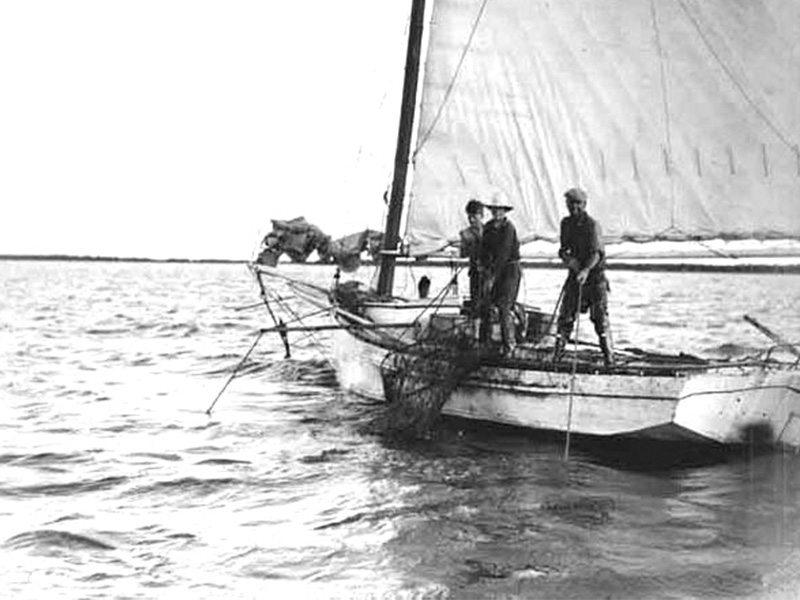 Oysters were big business. Several thousand boats ranging from ocean going schooners to small two person canoes were used to harvest oysters. Along with the twenty thousand people employed on the water harvesting oysters, there were another twenty thousand working along the Shore shucking and packing oysters for shipment to worldwide markets. The demand for oysters was high, and the profits from the oyster industry were great, risks of being caught were low and the temptation to break the law was strong.

Part 1 described the role of the watermen: Tongers and dredgers who competed to harvest oysters on the same beds. In Part 2, you will read about the shuckers, key to the land-based industry that processed the oysters and hear more about the oyster police and why they earned such a notorious reputation for ineptness.

Most of the material for this article comes from the New York Sun, December 9, 1888, edition in a full page eight column feature article that comprehensively describes many of the battles fought over Chesapeake Bay oysters in 1888.

In the 1880s, there were over 20,000 people involved with shucking, packing and shipping oysters from the Chesapeake Bay and its tributaries. Dorchester County once had about 100 small packing houses and several freight cars full of shucked and canned oysters were shipped from Cambridge to points north and west each day. Harbors around the Bay are still lined with oyster shell and digging a hole in any waterman’s community is bound to yield a shovel full of shell. The Dorchester “Oyster Counter” (an actual county employee’s job title) reported one million bushels of oysters had been harvested from the Big and Little Choptank rivers with 400,000 bushels directly landed in Cambridge and the remaining 600,000 bushels of oysters sold at Oxford or to buy boats bound for Baltimore in 1885.

Oysters were sold by the bushel, and there were roughly 80 four-inch oysters to a bushel. Today’s bushel contains about 120 to 130 oysters of smaller but still legal size. The waterman received 20 to 30 cents per bushel at the dock, and a little less when purchased by a buy boat moored by the oyster bed. The packers processed and sold the oysters to shippers and commercial distributors. Customers paid about one cent for each fresh oyster.

Used shells have commercial value and were not returned to rebuild the oyster beds until recent times when Maryland enacted its “no shell left behind” oyster shell recycling policy. Shells were used to pave roads, were burnt to make lime for cement mortar and oyster shells were ground up for chicken grit. Prehistoric oyster shells are still harvested for commercial use. 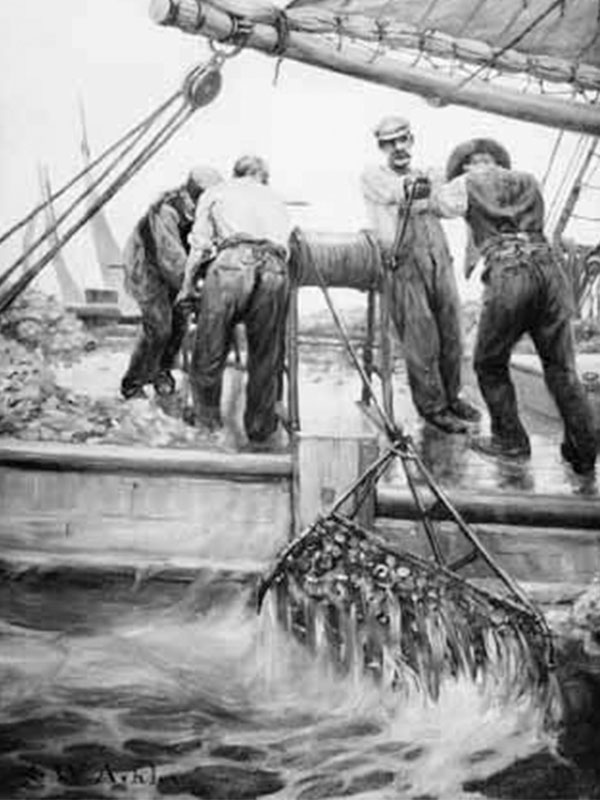 Oyster shuckers, both young and old were predominantly female and many were African American. Each shucker stood at a small stall or booth and working with a short knife, quickly pried opened the shell and scooped out the oyster and its liquor, or juice, which went into cans. Shuckers were paid for each quart or gallon of shucked oysters they produced and had to meet daily quotas to stay employed. Even young children worked from dawn to dusk in unheated sheds. In small communities, the packing house also owned the local store and shuckers were often paid in tokens that could be exchanged at the “company store” for food or necessities.

New York Times, December 3, 1888 – The Dorchester state attorney Daniel M. Henry Jr., said, “I wish there wasn’t an oyster in the Chesapeake Bay. It is the ruin of our agricultural interests. Farms all over the county are going to waste because we cannot get laborers. Just when farmers need help in the harvest season, they (workers) desert the farms for the town, for here they can make more money shucking oysters than in farm work.”

“Men and women both go into the work, getting a certain price per solid gallon, and when the oyster season is over, it is past the sowing time on the farms. Many would rather half starve and loaf through the summer on what they earned in the winter, than work for pay on a farm.”

The Sun continues, “As the industry grew and the dredgers showed more and more inclination to poach on the preserve of the scrapers and tongers, the oyster police force was increased. It is now known of as ” the oyster navy.” The fleet numbers 15 vessels: five schooners, eight sloops, and two steamers. Last summer, a third steamer was sold, and the proceeds applied to purchasing two sloops – a strange proceeding, for the inefficiency of sloops in the oyster war was demonstrated long ago. In fact, the navy has become the laughing stock of oystermen and the shame of earnest citizens.”

As you will see in future articles, the effectiveness of the oyster police was hampered by politically appointed captains and administrators and the lack of any plan for policing the oyster beds. Police schooners and sloops were smaller than pirate vessels. A few more steamers would have made quite a difference. The police steamers were often misused or used for political junkets and were not available to reenforce the schooners and sloops of the oyster navy.

The pirates might have been kept at bay if the police had better training, competent captains, enough ammunition, and better weapons aboard to make it possible for a single police boat to force 10 to 15 larger dredge boats off forbidden beds. Better equipped and emboldened by weak laws, the pirates went into battle carrying more ammunition and assured that they could beat the government in any conflict.

The New York Sun summarized with this statement, “All manner of things have conspired to make the dredgers more and more lawless.”

“At one time the Legislature passed a law forbidding any boat engaged in the oyster business to carry arms. Then it occurred to some sympathetic legislators that the oystermen might desire to replenish their larders with game. And an amendment was passed by which the dredgers may carry shotguns. Under this law not only shotguns, but muskets, breech-loaders, and repeating rifles got on board, until now hardly a dredger leaves Baltimore that is not better armed than the sloops and schooners of the oyster navy.”

Ironically, the oyster police were limited to carry only a small amount of ammunition. This was done so they would not be tempted to waste ammunition shooting at ducks to replenish their larders during long winter patrols.

“The Captains of the war sloops used to receive orders to fire into the rigging of dredgers that resisted arrest, and not to fire at the hull or the crew unless it became absolutely necessary. When the dredgers got into the habit of talking back with firearms, the police sloops were ordered to give battle in earnest. Then the pirates learned that the cannon of the government fleet were more dangerous to the police than to themselves, and that the war sloops had no sharpshooters on board.”

A crewmember was killed when the cannon on the police sloop Folly exploded while firing at pirates in the Chester River. The Board of Public Works, overseeing the oyster police, hired an ex-navy gunner to train all oyster police crews in the proper way to load, aim, and fire their cannon. Pirates joked that the cannons were more dangerous to the police than to themselves.

The newspaper also commented on politics, “The management of the oyster police is vested in the Board of Public Works. This board appoints a commander, who takes executive charge of the navy during his term of office, Jacob Plowman is Commander now. Before he became a politician, he was a northern Maryland tin-can maker. Not only the pirates, but the tongers and the inhabitants of the Shore counties resented his appointment. They have a deep-seated prejudice against having their vital interests submitted to the discretion of a man who knows nothing about them.

“For the present, it may suffice to relate a story of Commander Plowman’s first trip on a naval steamer after assuming control of the department. He was standing at the wheelhouse when he saw a buoy nearly in the course of the boat. He turned to the pilot and said, ‘Better gee a little or you’ll run into that log there.’”

Editorials criticizing Commander Plowman, his ineptitude, and mismanagement of Maryland’s oyster police were frequent, lengthy, and grew increasingly bitter as the oyster wars continued. Many articles contained mostly criticism throwing in a few facts about the latest skirmish with the pirates. Annapolis newspapers reported lengthy political debates and inquiries over the behavior and conduct of the oyster police and the daring acts of the oyster pirates, some who operated in Annapolis waters.

New York Sun: “The pirates have become so emboldened that they have affected an organization for fighting the police, and in this neighborhood, at least, the navy has been routed, and all the oyster laws set at defiance.”

New York Sun: “The dredgers complain that the laws are unjust. Capt. F H Spence, of Dorchester county, an eye-witness of one of the severest battles of the war, told the local judge that dredgers were ruining the oyster business: “That’s a mistake, Judge, the tongers do more harm to the beds than we do. It is true that we may rip a reef to pieces for one season, but by another year there’ll be plenty of oysters there. That’s because we keep moving while at work, and our cull is not all cropped in one spot. The tongers, on the contrary, stay anchored in one spot, and they don’t leave it until they’ve got every oyster there aboard. Then they drop the cull on the raked reef and it heaps up so that it doesn’t give such young oysters as may be left a chance to grow.’”

Captain Spence’s argument is still used today to speak against or plead for changes in tonging and dredging laws. Substitute dredger for tonger or tonger for dredger and you often have the other side’s argument. There have been ongoing arguments for and against oyster conservation since the laws were first initiated back in the late 1860s and the controversy and arguments continue to this day.

In Maryland Oyster Culture: A Brief History, Donald Webster writes,“The politics of leasing (oyster beds) continued over many years as watermen successfully blocked efforts to expand leased bottom in many locations. During the application process for leases, which required a notice of the application be placed in local newspapers, waterman wishing to protest the lease had only to show up in front of the judge and affirm that they had caught a ‘day’s work’ from the area during the past five years.”

For many years, Maryland law specifically forbid leasing oyster beds for aquaculture so all beds were on common ground open to everyone legally authorized to harvest oysters from that area. It is only in recent years that oyster farming has taken hold in Dorchester County.

The next story will pick up with the battle of the Little Choptank River when the police sloop Groome and her crew were captured by pirates.

Bud Marseilles is past president of the Dorchester Skipjack Committee and has sailed on the skipjack Nathan of Dorchester out of Cambridge for 15 years working as a sail crewmember and docent. He also volunteers at the Chesapeake Bay Maritime Museum in St. Michaels. To get a better understanding of oysters and dredging under sail, Bud recommends that you book passage on one of our local skipjacks and visit the Maritime Museum.