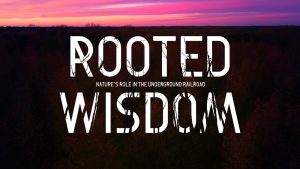 Ginna explains the journey to making the film and creating educational opportunities on the Underground Railroad for people of all ages. “I started looking into developing the concept Damika had identified to connect our audiences of various ages to this experience. Kate Larsen recommended we talk to author and historian Anthony Cohen. We connected with him, and it was just fabulous. In 2010, Anthony came out and did a number of interpreted guided walks for us,” Ginna, now Executive Director of the Arboretum, explains.

She adds, “We soon realized we couldn’t get him all the time, so that’s when I applied to both the Maryland Heritage Area Authority and Maryland Humanities and received funding to hire Kate and Anthony as consultants to develop an audio tour based on Anthony’s walk.”

Following the audio tour, in 2014, Jenny Houghton, then Director of Education at the Arboretum, developed 5th-grade lesson plans for public school field trips and homeschool and private school students. Ten years after the original audio tour, Ginna then got inspired and applied for a National Park Service Network to Freedom Grant to refresh the original audio tour. This helped provide the foundation for some of the footage of the film that recently debuted at the Avalon Theatre in Easton. The film, produced by Adkins Arboretum, filmmakers George Burroughs and Lauren Giordano of Schoolhouse Farmhouse Studio, and historian Anthony Cohen, revisited this previous programming developed by Arboretum staff and its volunteers.

The next phase of the Rooted Wisdom project is to hold focus groups in May made up of stakeholders to determine how to offer docent training to lead guided Rooted Wisdom walks and educator training to provide field trips for schools in the fall of 2022. These field trips will tie the film’s focus to the Arboretum’s interdisciplinary educational mission for school-aged children. There is interest from Queen Anne’s and Caroline County Public Schools to integrate the Arboretum’s new curriculum for Rooted Wisdom in fifth-grade science and social studies classes.

Following the public debut of the film, Adkins Arboretum Board Member Mary Beth Durkin was integral in getting Richard Marks of Dock Street Foundation to support Rooted Wisdom and engage Building African American Minds (BAAM) – the afterschool program in Easton providing academic enrichment in a safe, caring, and structured environment for African American males and now females. The Arboretum offered the film for a special preview by students participating in BAAM and Chesapeake Multicultural Resource Center (ChesMRC) in April at BAAM’s Athletic Center. As narrator Anthony introduced the film to the students, he explained the film was filmed at Adkins Arboretum to help viewers understand how self-liberators used their knowledge of the natural landscape to forge a path to freedom, which included their methods for navigating, concealing themselves, finding food, and evading capture.

Anthony comments, “It was pretty incredible seeing the kids’ reactions today. I think the film was initially aimed at more of an adult audience. It’s very visual, but there’s also an underlying narrative. So, it was really exciting to see that the kids were able to pick up a lot of the nuance – they had lots of questions about it. But the general message of the film translated really strongly to a younger audience.”

The film has five sections, including Where History and Nature Meet, Navigation, Refuge and Shelter, Nourishment, and Blending In. Anthony was able to stop at the end of each section and talk with students. He even invited the students to make the sounds animals would make in the night, to better understand how nature aided those on the Underground Railroad journey. This included how they found direction as they traveled, what they ate, and how they stayed safe on their journeys.

BAAM’s Executive Director Dina Daly added, “I think having the film in five segments allowed Tony to engage with the kids after each segment. That was very good. They were just enthralled and enjoyed the film.”

Anthony adds, “This is one of the great untold stories of the Underground Railroad. We can read about it in the book. You hear that Harriet lived enslaved on a farm in Maryland, but then she escaped to Canada. Well, you know, you read that in a sentence in just a few seconds. But the journey in between is left out. This film actually helps thread the needle so that you can actually see what some of that journey would have been like.”

Dina shared that last summer, during BAAM’s summer camp, her students visited the Harriet Tubman Museum and Education Center and Harriet Tubman Underground Railroad Visitor Center. She adds, “They got to see a lot and ask a lot of questions. So, this was a nice follow up for them . . . hopefully they’ll go home and talk to their families about what they saw today.”

When asked what’s next, Anthony replies, “I think part of that answer is we grow the communities that we live in. Another kind of strange aspect of the Underground Railroad is it’s historically been a story that goes in one direction. But especially with people like Tubman, they were always looking back. They used the escape to freedom as a way to get a foothold to gather themselves and strengthen themselves to come back. Even after the Civil War, so many returned to the communities that they had exiled themselves from. And that’s often where the story gets lost.”

Dina concludes, “And no one knows of that journey – the heroism, the bravery, and ultimately the love of family and community, which I think is what BAAM is all about helping our kids to discover.”

As the Rooted Wisdom project moves forward, the Arboretum is looking forward to further educational collaborations with groups such as BAAM and ChesMRC. Ginna states, “Adkins Arboretum continues to build upon this initiative by developing school programming, in-person tours, and on-demand audio. Our vision is to inspire environmental stewardship, provide respite and healing, and celebrate natural and cultural diversity through the joy and wonder of the natural world.”

“I get people calling and even our grant reviewers saying that no one’s doing anything like this – even after we’ve done it and it’s been a success. People feel like it’s really breaking ground and could be a role model for other communities sharing their Underground Railroad story.”

For further information about the Rooted Wisdom Project or to view the film, visit naturesrole.org, which contains the film in five chapters and is infused with detailed accounts of self-liberators, and related historical sites, and the landscape around them. For further information about upcoming guided walks by Anthony Cohen, based on the film, visit adkinsarboretum.org.