Mary Poppins is set to fly onto the stage of Easton High School October 20, 21, 22, 27 and 28. This high energy, toe tapping, chimney sweeping, high-flying family musical will be one for the record books. 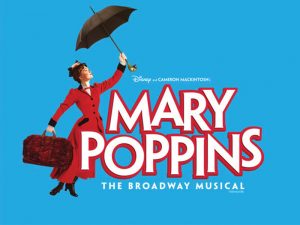 Based on the books by P.L. Travers and the beloved Walt Disney film, Disney and Cameron Mackintosh’s “Mary Poppins” delighted Broadway audiences for over 2,500 performances and received 44 major theatre awards from around the globe.

The jack-of-all trades, Bert (Matthew Keeler), introduces us to England in 1910 and the troubled Banks family. Disconnected and disjointed George Banks (Jonah Sanders) and his wife Winifred (Haley Anderson) are struggling to run their household under George’s strict reign. Young Jane (Claire Weedon) and Michael (Connor Flaherty) have sent many nannies packing before Mary Poppins (Madelyn Hancock) arrives on their doorstep. Using a combination of magic and common sense, she takes the Banks Family on a journey where they must learn how to value each other again.

Things take a twist, however, when George’s old nanny, the nasty Miss Andrew (Eve Van Horn) shows up and tries to offer her version of “Spoonful of Sugar,” which happens to be “Brimstone and Treacle.” Along this journey, the family also encounters The Bird Woman (Emily Wittman) who teaches and represents hardship, love, compassion, empathy and hope – the themes of this musical.

Easton High’s production features a cast and crew of over 60, as well as breathtaking flying effects provided by “Flying by FOY,” who provided the flying effects for the original Broadway production. Included are illusions, spectacular dancing, elaborate scenery, special effects, stunning original costumes and some of the most beloved and memorable songs ever written for a musical including “Spoonful of Sugar,” “Let’s Go Fly A Kite,” “Chim Chim Cher-ee,” “Supercalifragilisticexpialidocious,” “Step in Time,” “Feed The Birds” and “Jolly Holiday,” as well as several new songs that have been written just for the stage production.

Director, Richard A. Vitanovec, states, “The musical ‘Mary Poppins’ is a beautiful fusion of various elements from the beloved Disney film and the classic series of books by P.L. Travers. The characters that everyone has grown up with and the values and message that the musical presents is a heartwarming story that everyone young, old and those in-between needs to see.”

Tickets for the show are $10 for an adult ticket and $5 for a child/student ticket (18 years and under) and are on sale at the door or in advance only at Easton High School’s Main Office.