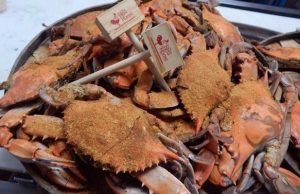 It had been a long week and we wanted more than just a meal. We wanted – no, we needed – a brief escape. That’s how we came to have our toes buried in the sand, sipping cold drinks at a tiki bar.

We weren’t in the islands, as appealing as that sounds just now. We were at The Red Roost near White Haven, outside Salisbury on the Wicomico River.

This ramshackle crabhouse is famous in these parts. Occupying what was once an old chicken house, this bare-bones restaurant features concrete floors, corrugated steel partitions and orange banquettes. Crab baskets serve as light fixtures. In the main dining hall, long family-style tables, covered with brown paper, run the length of the building. Large gray plastic trashcans are strategically placed at the end of each table and double as tray caddies for the servers. Fine dining this is not.

Hundreds of single dollar bills are stapled to the walls, bulletin boards, even the rafters. Each has been signed with the name of a guest eager to memorialize his or her visit. One beau even proposed by writing, “Will you marry me?” on a bill and stapling it to the wall. (According to our waitress, he was still required to get down on one knee and pop the question because the bride-to-be never saw the scribbled-on dollar.)

As the restaurant filled with diners, we were surrounded by a cacophony of sounds—cracking shells, hammering mallets, laughter and singing. Indeed, The Red Roost seems to be a favorite place for special occasions. The servers sang the house version of “Happy Birthday” to both a 3-year-old and a 90-year-old, each time clapping, crowing and flapping their arms in unison. It’s quite a festive place.

The food is standard crabhouse fare. The Crab Pot is served in a deep enamelware pot, with the food layered inside. On top were ears of corn, still in the husks. There were little white bags of clams, mussels and tender Old Bay covered shrimp. On the bottom was a layer of fat, succulent steamed hard crabs.

The corn on the cob was fresh and sweet, though we weren’t too keen on having to shuck our own. But the fried chicken was the highlight of the meal. Juicy and tender, it boasted a salty, slightly spicy coating. The chicken alone was worth another visit.

The Red Roost does not provide pre-packaged hand wipes, but they have a double sink stationed at the back of the restaurant where you can wash up after dinner. You’ll need clean hands if you’re planning on shopping at the in-house store, stocked with T-shirts, rooster knickknacks and cookbooks.

Still, it wasn’t until we had finished our crab feast that we learned The Red Roost has a new addition. We noticed golf carts shuttling people through the marshes and down a long dirt road, but we didn’t think to ask our server. We were preoccupied with getting our orders placed for crabs. (Hunger is a powerful motivator).

With our bellies full, our curiosity reemerged. We asked our server, “Where, pray tell, are the golf carts going?” Her answer: “Bull Lips!” 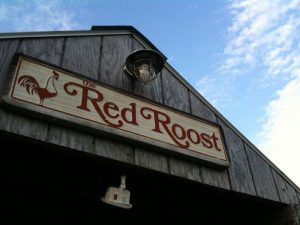 We soon ascertained that “Bull Lips” is not what they’re using for crab bait, but instead is the establishment’s new dock bar. Curious, we hailed the shuttle and headed out to take a look. (The shuttles also ferry boaters to and from the restaurant.)

Perched on a ridge overlooking the Wicomico River, a spot has been cleared and a bar installed. The bar itself resembles a rustic “shanty ark” watermen of yesterday used to pull up and down the Bay to live in while fishing. Concessions to modern life include a refrigerator in back, the griddle inside the bar and a few stools lined up on the outside.

Customers can relax at picnic tables with lime green umbrellas or recline in slatted wooden chairs. An old sailcloth shades another dining area. There are individual hammocks all hung in a row for those who really want to get comfortable. Adirondack chairs surround a sandy fire pit and lighted torches and strings of lights add to the atmosphere as dusk settles in.

Several groups had arrived by boat and still others were docking as we approached. One group was playing Corn Hole. Another was studiously eating a bag of crabs they had brought up from The Red Roost. Yet another was waiting for burgers the bartender was frying up on a griddle behind the bar.

Afternoon eased into evening as we sat sipping our “crushes” and burying our toes in the sand. We came for crabs, fried chicken and cold beer. We found a little slice of heaven. It was the perfect end to a lazy summer Sunday.