Imagine a world without books. The Barbara Bush Foundation recently tweeted, “60 percent of the kindergartners in neighborhoods where children did poorly in school did not own a single book.” According to the U.S. Department of Education (DOE), children not ready for kindergarten are three to four times more likely to drop out of school; 40% more likely to become teen parents; and 70% more likely to commit violent crimes. 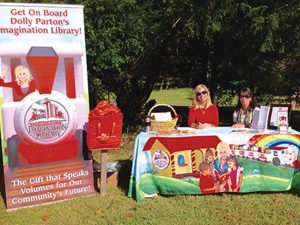 Amy Walstrum (left) and Kimberly Baker, board members and volunteers for Imagination Library of Talbot County, recently promoted their program at the Pickering Creek Harvest Hoedown.

These statistics got the attention of a local group of women who realized that literacy between the ages of birth and five years old could affect kindergarten readiness and make a significant impact in creating healthy and productive citizens. Cristy Morrell, who had been a third and fourth grade teacher as well as an English for Speakers of Other Languages (ESOL) teacher, comments, “I have always loved children’s story books. My son was a big reader and we read books together and had book talks.”

Cristy comments, “Later a light bulb went off and I realized that this issue was becoming significant in our community and I knew a capable group of women who could help address the issue.”

Cristy did some research and learned about Dolly Parton’s Imagination Library. The program was developed by Dolly Parton in 1996, through the Dollywood Foundation, for preschool children in her home area of Sevier County, Tennessee, which had one of the country’s highest illiteracy rates. Dolly wanted children to have their own personal library of books that would encourage them to love reading. Through the program, children from birth through their fifth birthday, receive a free monthly book that is mailed to their homes. The books are carefully selected by an expert committee and are age-appropriate, have positive themes that promote self-esteem and confidence and include classics, as well as new award-winning books. The Penguin Group both prints and ships the books.

As the program began improving both reading readiness and early literacy rates in East Tennessee, Dolly received many requests to duplicate her program. In 2000, she began offering replication of the program to communities that would be willing to financially support it in their areas. Imagination Library of Talbot County (ILTC) is an affiliate of Dolly Parton’s Imagination Library (DPIL). Currently, there are over 1,800 communities across the United States that have Imagination Libraries. Over the past several years it has expanded to Canada, the U.K. and Australia. Each month 880,000 books are mailed and, to date, over 70 million books have been given away worldwide.

Cristy adds, “What I love about this program is that all preschoolers in the community are eligible for enrollment in the program regardless of need. Not being a need-based program has a number of benefits. First, it takes away heavy administrative responsibilities to prove need. Secondly, it removes the stigma associated with poverty, as everyone gets the books regardless of their income level. Finally, it levels the playing field in the classroom as all the children can talk about their common books.”

In order to bring the books to the children, a local champion must pay for the cost of the books and their mailing. The average cost for each child is $25 per year, which includes 12 books a year per child. In Talbot County, if they registered every child, the cost would be approximately $49,000 per year. Cristy partnered with Francesca Wiseman and began looking for funding for the project. The two wrote grants and reached out to area civic organizations. On April 1, 2013, Imagination Library of Talbot County was established as an official affiliate of Dolly Parton’s Imagination Library and a fund of the Mid-Shore Community Foundation. An all-volunteer staff serves as its Advisory Board and currently runs ILTC and includes Cristy Morrell, Francesca Wiseman, Karen Broujos, Amy Walstrum, Kimberly Baker, Kristina Henry and Charles Wrightson. These seven volunteers raise money, register children, promote the program, maintain databases, create and administer evaluations and surveys and develop outreach programs.

Cristy adds, “We want to help parents read to their children by giving them the materials they need. By being read to, children begin to understand pictures tell a story and later they learn that letters form sounds and words tell a story, learn how to hold a book, which way to turn a page, where to start reading on a page and what to do when you get to the end of a line.”

She adds, “Children further benefit from being read to because listening to stories improves their word recognition, rhyme generation and detection, object identification and listening comprehension. Equally as important is the close bonding that occurs between children and their parents as they sit together and read a story.”

Cristy states that many studies have confirmed that reading to children every day during their preschool years not only provides a lifetime of benefits, but it is also one of the most important things parents can do to prepare children for success in school. She states, “Studies have shown that families with children enrolled for as little as four months show a marked increase in daily reading.”

To date, Talbot County has 1,100 active members and has mailed over 19,000 books to area children. Families have expressed excitement and pleasure over receiving books for their children. Through ILTC family surveys, many parents have stated that they are reading to their children more than before, and many older siblings are equally excited to see the books arrive as they enjoy both the stories and reading to their younger brother or sister.

Organizations and business have been financially supportive and encouraging as they see the inherent value in an educated community. Since then, ILTC has received support from individuals and such businesses, organizations and foundations as Christmas in St. Michaels, the Dock Street Foundation, Eastern Shore Vacation Rentals, the English Family Foundation, McDonald’s of Easton, the Michael and Nancy Klein Foundation, PNC Foundation, Ronald McDonald House Charities of Baltimore, the Rotary Club of Easton, Safeway Foundation, St. Johns Foundation, the United Fund of Talbot County and the Women and Girls Fund.

In addition, the group has also assisted groups in Caroline, Kent and Queen Anne’s counties to establish their own Imagination Library affiliates. Recently, the women created a ¼-mile story walk for Pickering Creek’s Harvest Hoedown that shows families how to engage their children in reading. They hope to offer the story walk to other organizations for their events.

Cristy comments, “We have continued our efforts to educate our community about who we are and how important early literacy is not just to children and their families, but to the long-term economic stability and well-being of our community.”

Mary Adkins, Director of the Talbot County Judy Center, comments, “I was ecstatic when I learned Imagination Library was started in Talbot County. Not only did I invite the Director of the program to join our partnership, I quickly registered my two-year-old granddaughter for the program. My granddaughter was so excited to receive her first book, The Little Engine That Could, in the mail. Although future books began arriving every month, the first book was especially important to her. She made everyone read it over and over again. Imagination Library of Talbot County makes sure each child receives the same books, assuring all children enter school having been exposed to the same vocabulary and the same stories. The time parents spend reading these stories to their children over and over helps prepare their kids for a successful future.”

Cristy concludes, “When I hear the stories from these families and see the faces of these children, I know what we are doing matters. Every time we need something for the program, we get it and are able to move forward. I think this is a sign that we are meeting an important need and moving in the right direction.”

The ILTC program needs continued financial support to sustain it for the future. According to Cristy, successful Imagination Libraries have a strong individual donor base. She encourages people to consider donating to the group, whether they are individuals with a passion about reading, book clubs or civic organizations. A donation of $25 supports one child for one year, including 12 books. She also encourages everyone who knows a child between birth and age five to have them visit  imaginarylibraryoftalbotcounty.org  to sign up. For further information, contact Cristy Morrell at 410-310-2757.

This column in Attraction, by Amelia Blades Steward, will visit the faces of those who have benefited from the generous and tireless work of the nonprofits on the Mid Shore. Amy has been a freelance writer in our community for over 15 years and offers a glimpse into the lives of residents on the Mid Shore who she has met along the way.