I am blessed to have two vegans in my life. I say blessed because I have been able to ask questions and discuss their dietary choice with them on many occasions and it has led to a deeper, more comprehensive understanding of this diet. Have our discussions led me to be vegan? No, I eat meat, but I applaud their choice.

One of my friends I will coin “The accidental vegan” had an interesting path on her road to veganism. Here is her tale: We grew up across the street from each other outside of Philadelphia in an upper middle class town where our mothers cooked classic American food of the 1970s and 80s – meat, potato, vegetable, apple pie, basic – but good. Needless to say, being one of seven in a catholic family, she said grace, finished her plate and wouldn’t have considered any other diet existed other than that which her mother put in front of her. 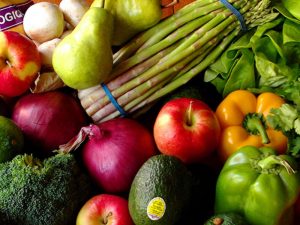 All her life my friend had a rash on her face that could never be explained. Flash forward to her second child who had a milk allergy until he was five. Removing dairy from her home, coupled with her first child’s resistance to all meats since toddlerhood (she seemed to be born a natural vegetarian), my friend found herself naturally eating less and less meat and dairy. Miraculously, not only did her rash begin to fade, but her skin began to glow. She dropped a few pounds and her energy climbed. She began to read books on food and the vegan diet. She educated herself and, in doing so, decided the vegan diet was right for her and her body. Many years later, she remains a vegan. The consequences? Her skin glows and she is trim and healthy. The vegan diet works for her.

Whenever she comes to visit, I make a conscious effort to go mostly vegan in my house for the few days that she’s here. She doesn’t demand it, and would never ask me to do it, but I see it as a great way to educate my children on dietary choices. Her son, who eats meat, enjoys coming to our house because he knows I will cook him bacon. It is the pivotal point of his visit and his mother embraces it. For her daughter, the natural born vegetarian, she enjoys her cheese, which I have in great supply. Of course, while they are at my house we do not offer gluten products, seafood of any kind, or nuts, because of our allergies and intolerances. Nuts, being one of the great nutritional components of the vegan diet, are set aside for the few short days she is here and instead we cook lentils, hummus, or perhaps make a bean salad. When a door closes, a window opens in our culinary maze.

When I explain to other people how excited we are for my friend to visit, they become somewhat confused and wonder how we navigate the minefield between our many very distinctly different diets. We embrace the challenge! The mere exercise of feeding nine people vegan, gluten free, vegetarian, nut free, oatmeal free, cherry free, seafood free food with a side of bacon is a great exercise in tolerance, creativity and acceptance. We semi-seriously joke about creating a Venn diagram to map out our meals, but instead we talk ahead of time, plan meals and she sends me recipes. I go shopping for extra vegetables and read even more labels. We spend our days cooking, eating and laughing. Instead of being afraid of each other’s diets, we embrace them and learn from each other.

In a recent discussion with my vegan friend, I asked her if she considered herself a purely dietary vegan or an ethical one as well. Did she eat honey and how did she feel about leather products? This was her response: “Hmmm, labels are hard. I know several people who call themselves vegetarians, but consume fish for instance… I’d say I don’t eat animal products. I don’t seek out honey but if it is in a salad dressing at a restaurant I would eat it. I do have a honey alternative made from apple cider. As far as leather, I would like to avoid it but don’t as I have leather belts and shoes. Vegan shoes are available on line but it is really hard to shoe shop that way. So for now I have leather but if I had an alternative I would do that. If you read some vegan blogs, folks get so fired up! I think what people choose to eat is such a personal issue and people should be able to choose, but that really upsets a lot of people. Not eating dairy for allergy reasons seems to be accepted but choosing not to makes folks really angry in a very sad way. It’s a very hot button topic. You also read how vegans will tell you they are vegan in the first five minutes of meeting them. Well, I personally would rather not even discuss my dietary choices with strangers and you would be amazed at the angry responses you get when people “find out.” I read a whole article about this recently and the comments were telling you if you eat almonds you are not vegan because bees are trucked around to grow them…”

While it’s a universal premise that the practice of veganism is both the abstinence from the use of animal products, particularly in diet, and an associated philosophy that rejects the commodity status of animals, there seems to be a spectrum when it comes to being vegan. Dietary, ethical and environmental concerns are the three main considerations of people who practice veganism. Dietary vegans do not consume animal products, including eggs, dairy products and other animal-derived substances. An ethical vegan is a term used to refer to those who not only follow a vegan diet, but extend the philosophy into other areas of their lives and oppose the use of animal products for any purpose (such as wool or leather). Another term is environmental veganism, which refers to the avoidance of animal products on the premise that the harvesting or industrial farming of animals is environmentally damaging and unsustainable. Although the vegan diet can be traced back to some of the Greek philosophers, the actual term “Vegan” is relatively new. It was coined in 1944 by Donald Watson when he co-founded the Vegan Society in England, at first to mean “non-dairy vegetarian” and later to mean “the doctrine that man should live without exploiting animals.”

The second vegan in my life is my daughter’s roommate from college. When I asked her about her dietary choice and what led her to become vegan this was her response: “I went vegan for Lent in 2012. I had been trying to cut dairy out of my diet for a while as I felt better when not consuming dairy products and I knew the industry was pretty inhumane. Sticking with it for 40 days made it a habit and I wasn’t going to break it at that point.”

I also asked her how she felt about leather products and did she own any? “No, and I avoid wool and silk as well. For a while I had worn my Uggs as I already owned them and wasn’t going to get rid of them as that would be a waste. I think some vegans don’t have a problem with buying secondhand but I personally wouldn’t.”

Being a Coloradan I asked her if people from her home state seemed more accepting of the vegan diet than here on the Eastern Shore. “I’d say it’s definitely more common out here (in Colorado), as it compliments the healthy lifestyle which appeals most to Coloradans. So in that way I guess it is more accepted whereas in smaller towns there may be fewer options that are supportive of a vegan diet. I think in general if you’re not shoving your beliefs onto someone else, you should be able to coexist.”

Whether a person chooses to eat vegan because of health reasons, ethical choices, or because of the negative impact the meat industry has on the environmental resources, the important word here is choice. Let’s remember many people don’t have a choice of diet; when food is scarce people will eat what is available. However, here in America our choices are vast and many have the luxury of being able to determine what foods are best for their body. If we think of our bodies as working machines, and we want them to work at optimal efficiency with an output of maximum energy, wouldn’t it make sense to search for the perfect fuel combination for our systems?

Sometimes it’s hard to understand the difference between all the different dietary choices that are available. Pescetarian? In this diet a person consumes fish and seafood, but not poultry or meat from other animals. Paleo? This diet focuses on what our hunter-gatherer ancestors ate such as grass fed meats, wild caught fish, roots, tubers, veggies and some fruits and excludes grains legumes, sugars, dairy and processed foods – think pre-agricultural. Flexitarian? This is a person who has a primarily vegetarian diet but occasionally eats meat or fish. What food or “fuel” works best for your body?

I am always curious as to what moves people to change their diet? One thing for certain is that their reason it’s often not what you think. What many fail to do is make the jump between reason and diet. I don’t believe people arbitrarily wake up one day and say: “Hey, I think I’ll become a vegan.” Most have a reason and a very important one. Maybe they are ill and the vegan diet may be an integral part of their recovery. Maybe they have researched and read many documentaries about the cruel conditions of our slaughterhouses and the stress and strain we put on our animals bred for consumption. Beyond that, America’s consumption of meat taxes the environment tremendously with the copious amounts of water and crops needed to maintain and support this system. Perhaps it’s time we recognize that we are in food crisis and one less consumer of meat can’t hurt the earth. In fact, maybe vegans are the new revolutionaries and they have their finger on the pulse of the planet. Some vegans live a quiet life. Some make a statement, but all of them commit to a higher ethical standard. Mahatma Gandhi was a vegetarian with the only animal product he consumed being goat’s milk. So, my vegan friends, carry on and know that I don’t condemn you, I commend you.

Eat Vegan Before 6:00, by Mark Bittman

The Evidence for a Vegan Diet – The Atlantic Monthly, January 2012

“Our Vegan Diet Almost Killed Us – No, Really.” www.eatplantsdrinkbeer.com

1 cup of mixed dried fruits of your choice

(I used equal portions of diced apricot, raisins and cranberries)