Concern is on the rise about the status of mental health in communities across the country. Decreasing resources to support services and a spike in violence have created a gulf that often leaves families in crisis and communities challenged to meet the growing needs.

On the Mid-Shore, a behavioral health and rape crisis center, For All Seasons, Inc., is providing comprehensive and integrated therapy, advocacy and psychiatric care to children, adolescents and adults on their journey to wellness. In particular, the nonprofit’s commitment to school-based counseling is changing the lives of Mid-Shore families and communities, addressing the complexities of delivering mental health services to a rural area.

Beth Anne Langrell, Executive Director at For All Seasons, who officially took over leadership in January 2014, comments, “Mental health and sexual assault are not topics that most people want to bring up and talk about. It is the topic that everyone hopes is being taken care of by someone. Our agency is that ‘someone’ on the Mid-Shore. We are an agency that doesn’t sleep, providing services 24/7.” 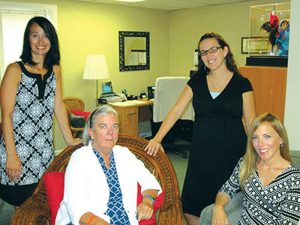 Members of the For All Seasons Leadership Team include Lesa Lee (back, left), Clinical Director; and Susan Truitt, Supervisor of Dorchester County School-Based Mental Health System; Alice Ryan (front, left), Chairman of the Board of Directors of For All Seasons; and Beth Anne Langrell, Executive Director.

In the area of school-based counseling, For All Seasons is working hard in both Dorchester and Kent counties to address the needs of families for every day issues like death, divorce, family dynamics, anxiety, behavioral issues, peer relationships and even cyberbullying. But, in addition, a quarter of the staff of For All Seasons is trauma certified to deal with the more serious issues related to families who have been victims of poverty, domestic violence and drug use – growing problems on the Shore. By the end of 2016, all For All Seasons staff will be certified in trauma.

Susan Truitt, Supervisor of Dorchester County School-Based Mental Health System at For All Seasons, comments, “We realized that children weren’t getting mental health services due to the distances between everything on the Shore. While services were being provided to the schools through the public school wellness centers in each county, the demand was increasing for these services. We want kids to feel that school is a place where they can be safe and be successful.”

For parent Linda Barnes, of Cambridge, whose daughter Maddie attends South Dorchester Pre-K – 8, the 40-minute drive to get her for doctor’s appointments, from her full-time job in Cambridge to her daughter’s school in Golden Hill, was inconvenient and it took Maddie out of school for long periods of time. Maddie, who is going into second grade, has suffered from severe eczema since she was 18 months old. In addition, when she was in Pre-K, she experienced depression after the death of her grandmother who lived with her family. Doctors eventually determined that anxiety has been at the root of Maddie’s eczema.

Linda states, “This past year in first grade, Maddie began to have behavioral issues at school and showed restlessness in the classroom. She would tell us that she felt as if she could jump out of her skin. We didn’t understand it because she is a high level student. After Maddie began to exhibit test anxiety, the school’s guidance counselor recommended that Maddie talk to the counselor from For All Seasons who was at the school.”

Linda adds, “I was hesitant at first because of the stigma society associates with mental health issues. I didn’t want people to know about her issues. We realized, however, that we needed to do something so we agreed to have Maddie meet Susan Truitt. Susan began working with the guidance counselor and Maddie’s teachers, using behavior modification, to help Maddie break her test anxiety. They were able to help her become a different child.”

Linda explains that not only did Susan work with Maddie and her teachers, but she worked with the family to implement both a short term and long term incentive program to improve Maddie’s behavioral issues. She also provided support to Linda, who was becoming frustrated by Maddie’s behaviors. She comments, “Susan helped me to understand Maddie’s view of time and we worked on reframing time so Maddie would realize how much time she had to do certain tasks. This helped with her test anxiety.”

In January 2015, Maddie was diagnosed with Attention Deficit Hyperactivity Disorder (ADHD or ADD) and put on a low dose of Ritalin. The combination of the medicines and the therapy has helped Maddie to focus and manage her behaviors. Linda adds, “Before, the hardest thing for me was the sense of dread after school about how Maddie’s day had gone. No one wants to have ‘that child’ who is disrupting the classroom. Now, our time spent together is less strained and dinner times are less disruptive too. Maddie even got on the Principal’s Honor Roll by the end of the year.”

For Linda, the key is the team approach used by For All Seasons with the teachers and guidance counselor at the school and with Maddie’s doctors. Linda can exchange emails with Susan and Maddie’s teachers and share these emails with Maddie’s doctors at Johns Hopkins Hospital and Kennedy Krieger Institute who are managing her care. The convenience of having the counseling right at the school means that Maddie doesn’t have to leave school for her counseling sessions and Linda can meet with Susan at the school on a regular basis to discuss her progress.

Most importantly, however, for Maddie is that she is not treated any differently in school. No one knows when she is called out for counseling. Beth Anne Langrell, adds, “We want kids to know that it is ‘OK’ to not be ‘OK.’ We can help them confidentially in the schools and their peers don’t even have to know.”

Lesa Lee, Clinical Director at For All Seasons, comments, “Susan has done an amazing job in taking a leadership role with the schools in Dorchester County. The program’s growth is because of the relationships she has developed. Our school-based therapy is part of a school team which can help strengthen a school.”

Susan reflects, “Our presence in the schools after three years is making a difference. Teachers are receptive and beginning to understand how For All Seasons can be collaborative partners with them to support student needs. As an agency, we understand that the team approach is the only successful model. We’re reaching out to families and guardians so they know that services are available regardless of ability to pay. Family consent and participation in treatment planning is essential.”

Beth Anne concludes, “Continuing to improve the health of our communities means mental health services have to be accessible to everyone.”

In addition to For All Seasons school-based therapy programs, the agency offers outpatient mental health services, including psychiatry, for children, youth and adults, and crisis support for victims of rape, sexual assault and other traumas. Beth Anne Langrell adds, “Our agency is unique in that we offer services for both the English and Spanish populations. We recognize that we need to serve those currently in our community and also those who are coming to the region. We are very excited about our new bilingual certified child and adolescent psychiatrist who speaks both English and Spanish, which will add another level of culturally competent services.”

For All Seasons sees community members regardless of their ability to pay. Grants help supplement a portion of these costs, but far from fill the gap to provide these services in the community. In addition, the organization has experienced level funding for the past five years, while the need for services has continued to grow on the Mid Shore. Recently, For All Seasons has re-aligned its organizational structure, hiring more clinicians and administrative staff to meet these growing needs.

To date, For All Seasons receives funding from the Governor’s Office on Crime Control and Prevention, Mid Shore Mental Health System, all of the United Ways on the Mid-Shore and from the United Fund of Talbot County. Special angels to the organization have been the Dock Street Foundation and the Merriwold Foundation, to name a few, as well as many private and foundation donors.

For All Seasons Mission:
To provide the highest level of comprehensive and integrated therapy, advocacy and psychiatric care in a safe environment where English and Spanish speaking individuals, families and groups who have entrusted us with their care can be empowered and nurtured on their journey to wellness.

The Faces of Philanthropy column, written by Amelia Blades Steward, will visit the faces of those who have benefited from the generous and tireless work of nonprofits on the Mid-Shore. Perhaps unknown to many of us, these individuals have had their lives transformed by the missions of these organizations and are giving back in unique ways to better our world. Amy has been a freelance writer in our community for more than 15 years and offers a glimpse into the lives of residents on the Mid-Shore whom she has met along the way.