Faces of Philanthropy
February 23, 2017 by 2017Admin
0
In 1998, Habitat Choptank completed its first Women Build House – a home that was funded and built through the efforts of women volunteers. A new Women Build House project is underway at 59 Pleasant Alley in Easton and scheduled for completion in February 2017. Construction began in May 2016 during Habitat’s National Women Build Week. The new home will make it possible for another hardworking family to purchase a home with an affordable mortgage. 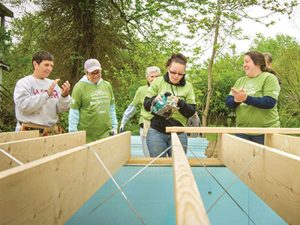 Kristan Green holds a power tool while working with Rhodana Fields (right), Habitat Choptank’s only woman Construction Supervisor, and construction volunteers. Kristan is another homebuyer who is working on her sweat equity toward buying a Habitat Choptank home.
According to Nancy Andrew, Executive Director of Habitat Choptank, the organization’s Women Build House is one example of an affiliated build where a coalition of organizations, businesses, congregations or individuals come together to build a Habitat home. They raise money, provide volunteer labor, food and refreshments and/or prayer support needed to build a simple, decent and affordable home in partnership with a qualifying family. She states, “An affiliated build enables us to add an additional build to our schedule.”

Nancy goes on to explain that the Pleasant Alley project originated after one of the organization’s volunteers, Reverend Abigail Nestlehutt, realized that women really liked being on the job site with other women and that it was time for another Women Build House. She initiated the fundraising efforts for the house while Kara Bowne Crissey, a local woman business owner, donated the property on Pleasant Alley, giving the new Women Build House a home. According to Nancy, 65 percent of the homeowners purchasing their homes through Habitat Choptank are women who are head of household.

Ashley Velez, the Habitat Choptank homebuyer of 59 Pleasant Alley in Easton, is holding a plaque designed by local artist Maggii Sarfaty that will be hung on her home when it is completed in February 2017.

She states, “These Women Build Houses are addressing a real need in our community – women helping women. We ask our homeowners to stretch so much, it’s important for the rest of us to stretch, too. A huge part of this program is for women to learn new skills.”

She adds, “The Mayor of Hurlock came and worked on the site. She was so proud of learning a new skill. When you participate in the build, it gives you ownership of what you create. Women Build Houses offer the opportunity for women to learn in an environment that is supportive. Women often leave the construction site with a real sense of accomplishment and go home and want to do things at their own homes – it’s very empowering working on a Women Build House.”

Rhodana Fields, Habitat Choptank’s Construction Supervisor and Neighborhood Revitalization Manager, who has been with Habitat Choptank seven years, is the organization’s only woman construction supervisor, comments, “What is special about a Women Build House is that women really work together as a team. They are natural and creative problem solvers.” She adds, “Even though three quarters of these women do not have construction skills when they come on the job, they are more likely to try something they have never done before.”

Aside from the knowledge and skills that women acquire while working on the Women Build Houses, there are other changes that occur at the construction site. Friendships develop and participants can become more compassionate. Volunteers get to know the homeowners, sharing in the goals of the family building the house and getting invested in their story. As a result, volunteers embrace the real values and mission of Habitat, which include being supportive of individuals and families who seek improved housing, lives that are stable, secure and self-reliant and communities that thrive.

Cindy Lilley, the coach for the new homeowner, Ashley Velez, is another key member of the team who are making this Women Build House a reality. Cindy, who has volunteered for Habitat for 10 years, serves as a mentor to Ashley, a single mother of three children, ages six to 12. She comments, “This is the fourth family I have coached. I love the interaction with the family and being a resource for them.”

Cindy’s role as a mentor is to encourage the homeowner in his/her efforts to budget and save money for the $4,500 settlement costs of the house. Each homeowner is also required to participate in the build, completing a total of 300 volunteer hours along with their family and friends. Homeowners’ children can get credit toward these hours by achieving “As” on their report cards – each “A” translates to an hour of volunteer time. In addition to the mentor’s support, homeowners participate in classes on budgeting, becoming a homeowner, community involvement and safety.

Cindy, who is a retired teacher, comments, “Helping people become independent, grow and reach a goal is something I did as a teacher. I love helping people through Habitat who are working so hard to reach their goals. It has been very worthwhile for me.”

Another important aspect of the Women Build House is the fundraising component. To date, more than $50,000 has been raised toward the total $96,000 needed to build the Pleasant Alley house. Every house Choptank Habitat builds is its own fundraising effort. The Women Build Committee is looking for hostesses for House Raising Parties as a way to create small networks of women through which to raise awareness, raise volunteers and raise funds for the Women Build House.

This column in Attraction, by Amelia Blades Steward, will visit the faces of those who have benefitted from the generous and tireless work of the nonprofits on the Mid Shore. Amy has been a freelance writer in our community for over 15 years and offers a glimpse into the lives of residents on the Mid Shore whom she has met along the way.