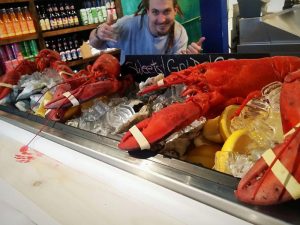 Lobster lovers take note! There’s a new seafood restaurant in downtown Cambridge and the lumps of crab found on the menu are few and far between.

We know. It’s a shock to us too. The Chesapeake region is known around the world for its seafood. For generations, food lovers have clamored for the Bay’s blue crab, oysters and rockfish.

But lobster? They live in oceans. You’ll not find a lobster anywhere in this estuary — from the Susquehanna Flats to the Bay Bridge Tunnel.

Still, we put Rock Lobstah Lobster Bar in Cambridge on our “must try” list and vowed to keep an open mind. After all, who doesn’t like lobster? And it’s the year 2016. We live in a world where instant gratification is not only possible, it’s expected. Lobster can be caught this morning, shipped overnight and served fresh the next day.

Despite paying homage to an ocean-going crustacean, Rock Lobster has a decidedly Maryland personality. The walls in the main dining room are bright yellow, with red and black accents (resembling the state flag). There’s a cooler of craft sodas and a corner set aside for selling T-shirts and other Maryland kitsch.

The other side of the restaurant resembles a small, relaxed neighborhood bar, with an open kitchen, another “serve yourself” cooler, blackboard specials and bar stools that scream Pabst Blue Ribbon. According to our server, this little corner was the original part of the restaurant, which opened in March 2016. They’ve already expanded into the much larger dining room, giving diners two different experiences.

Like the bar, the menu is compact and takes up one side of a single piece of paper. (Flip the menu over, and you’ll find instructions and illustrations about how to eat a lobster.) While we were intrigued by some of the more interesting offerings including lobster guacamole and lobster fondue, we were most interested in the “rolls,” found on the bottom half of the menu.

Lobster bars are common in New England, where competition to see who has the best lobster roll is fierce. Lobster roll recipes are closely guarded secrets and food writers regularly tour that region’s dives determined to locate the best, much like the Mid-Atlantic’s “best crab cake” wars.

We tried several of the roll combinations, including the L.B.L.T, with lobster, bacon, lettuce and tomato. Another version featured a chilled lobster salad with onion, celery and mayo and there were both crab salad and shrimp salad options, too. Still, our hands-down favorite was the classic – large chunks of Maine lobster served warm and buttered, wrapped gently in a toasted New England-style hot dog bun. Fabulous!

Chef Patrick Fanning serves his lobster rolls with Old Bay chips or corn on the cob and sweet pickles. You can substitute these for any of the other side dishes for a small upcharge. Options include the Boom Boom Cole Slaw, dressed with Thai chili sauce and Duke’s mayo, a Bibb lettuce salad, or the pickled potato salad (which sadly was depleted when we visited).

Though we love the lobster rolls, there are plenty of other items on the menu. The restaurant touts their lobster bisque as “the best around,” and we have to agree with them. Large, succulent chunks of lobster meat swam in a smooth, creamy soup. The so-called clam “chowdah” was equally delicious and thick with chunks of meat.

As expected, the restaurant also features a raw bar and steamer section, with everything from locally sourced raw oysters and little neck clams to shrimp and mussels. And, of course, there is lobster – claws and tails, as well as whole Maine lobsters, served with other shellfish or on their own with a choice of sides.

We sprang for the steam pot, which comes with clams, mussels, shrimp and corn, all topped with a bright red whole lobster. Heavenly garlic butter sauce is served on the side, but you can also order plain melted butter. All of this seafood is heaped into a small plastic bucket, which made us yearn for more room. Deep in the bucket were a few unopened clams and mussels, a real no-no in a seafood restaurant. But our server was so genuinely apologetic and charming that the oversight was easy to forgive and they replaced the offending shellfish without question.

We washed down our crustaceans with the Narragansett beer on tap, New England’s oldest craft brew, and finished the evening with a couple of “Five Dollar Treats,” or desserts, as we call them. We liked the Whoopie Pie, two orbs of blueberry cake cushioned with lemon filling. The intriguing Boston Cream Cupcake boasted a creamy center. A third dessert, the Strawberry and Rhubarb Hand Pie, came highly recommended by the server, who was chagrined to break the news that they were out of that, too. Growing pains, we’re sure.

If you have a taste for seafood and crab just won’t do, try Rock Lobstah. It’s pleasant and easy, the perfect place for a summer supper or real, honest-to-goodness seafood feast. Best of all, you don’t have to go all the way to New England to get your lobster fix anymore.

The name Rock Lobstah may sound familiar to New Wave Music fans. This was the name of a song by the B-52’s, released in 1978 and part of the band’s 1979 debut album. (If you haven’t heard it, go to YouTube and watch the video.) The nonsensical lyrics give a breathless account of a beach party, with real and imagined sea animals.

Cambridge’s Rock Lobstah, though, features a spelling found at www.urbandictionary.com and defined as “the way Mainahs say lobster.” Since Maine is number one in lobster production, some people believe this is the way is ought to be pronounced (and spelled, apparently). Go figure.

We’re going to be sampling some of the region’s fare and we’ll share our insights with you. And since we don’t identify ourselves to the chef or staff of a restaurant, it pays to treat every diner as a Picky Eater.