Basketball was the common ground for Brian Cotter and Michael McCormack, both of Easton, when they met eight years ago through Talbot Mentors. Michael, then eight years old, was in need of a father figure because his own father was living in Connecticut at the time. Brian recalls, “I remember that Michael was nervous the first time we met – he was quiet and didn’t say too much.” 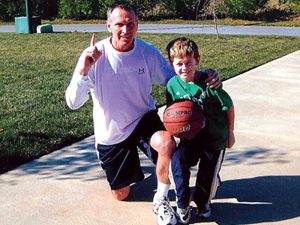 Michael McCormack (right) and Brian Cotter, both of Easton, are participants in Talbot Mentors, a program bringing together caring adults with children in Talbot County who can use a friend.

This was far from how I found Michael, now age 16, during this interview – the two bantering back and forth about their day as if they had known each other all their lives.

Brian and Michael were matched by Talbot Mentors because of their interest in sports. Brian had coached a Talbot Youth Basketball team and is currently an assistant coach for Saints Peter and Paul’s varsity basketball team. Over the years, he has taken Michael to his practices and games after school, as well as to the YMCA to shoot hoops or play baseball. Michael comments, “Our outings always ended with me getting a package of baseball cards.”

Michael’s father had played college basketball at Providence College in Rhode Island, so that also helped with the sports connection the two made. Over the years, in addition to playing basketball, Michael took an interest in doing the statistics and helping to manage Saints Peter and Paul’s high school basketball team.

In addition to sports, Brian has taken an interest in Michael’s schoolwork, holding Michael to high standards in school. He wants Michael to go to a good college and is already beginning to help him in his college search. He begins each day with an encouraging text to Michael, which says, “Be a leader in school today.” Michael feels the daily support, commenting, “There is someone out there that cares for me. I can rely on Mr. Brian, no matter what time I call him. He immediately calls me back.”

Michael’s mother also plays a supportive role in the mentor relationship, talking to Brian regularly about Michal’s progress in school or about any issues that come up. Brian has been particularly helpful with Michael’s distractions in school and helping to keep him focused. Three years ago, Michael’s father died and Brian played a large role in helping to support him, having experienced the loss of his own father. As Michael has gotten older, Brian has even been able to help him with issues with other relationships, such as those with girls. Michael states, “It has been important to have a male figure to help me with relationships. I can say anything to Mr. Brian and not be judged.”

The two have become integral parts of each other’s families. Before Michael’s father died, he was supportive of Michael having a mentor, sending Michael money to buy gifts for Brian. Since the beginning, Brian and Michael usually have dinner together on Sundays and Michael has gotten to know Brian’s children and grandchildren and even attended the family weddings. Michael comments, “I forget Mr. Brian is my mentor and his family forgets I am his mentee. My family thinks Brian is part of our family, too.”

Among some of Michael’s favorite memories with Brian have been going to an Orioles game; participating in a Partners in Art Program with Jan Kirsh, where the two made clay sculptures; attending a basketball camp at the U.S. Naval Academy; and being a part of Brian’s championship games at Towson University and the University of Maryland Baltimore County. Michael points to the sneakers he is wearing and adds, “Oh, yeah, and we bought these shoes together.”

Both Brian and Michael attend the same church and soon Brian will act as Michael’s confirmation sponsor. Brian, a pharmacist who now has an adult son and daughter, comments, “Michael has given back to me, too. I got involved with Talbot Mentors because my kids were grown and I wanted to give back to the community. I learn a lot from him.”

Talbot Mentors was founded in 1997 by Phil Kirby, a retired insurance executive, who saw a need in the community for mentoring. The nonprofit now serves all the schools in Talbot County, supporting at least 50 matched pairs at any given time. The school district is the largest source of referrals to the program, however, parents and children can also approach Talbot Mentors to receive assistance. Potential mentors are interviewed by the Executive Director to determine whether they are good candidates and to ensure they are aware of expectations. Background checks are run and letters of recommendation are requested. Talbot Mentors determines, based on the mentee list, if there is a compatible match. The family of the mentee must agree to participate in the program. To date, 83 percent of the mentors and mentees have been matched for one year or more.

The vision of Talbot Mentors is to help young people grow up to be productive, successful community members by matching them with caring adults willing to enter into close, supportive, long-term relationships that provide stability and positive role models for children. Mentors are ordinary people of all ages who come from all walks of life and all economic and educational backgrounds.

According to Javana Bowser, Case Manager at Talbot Mentors, “We are looking for mentors for the seven boys and two girls on our waiting list who are ages eight to 13.”

To help get involved with Talbot Mentors, consider becoming a mentor yourself or encourage someone else to be a mentor. The organization relies on the generous financial support of individuals, organizations and foundations and welcomes financial contributions to support its mentor/mentee pairs.  For further information, contact Talbot Mentors at 410-770-5999 or visit talbotmentors.org.

The Faces of Philanthropy column, written by Amy Blades Steward, will visit the faces of those who have benefited from the generous and tireless work of nonprofits on the Mid-Shore. Perhaps unknown to many of us, these individuals have had their lives transformed by the missions of these organizations and are giving back in unique ways to better the world. Amy has been a freelance writer in the community for more than 15 years and offers a glimpse into the lives of residents on the Mid-Shore whom she has met along the way.