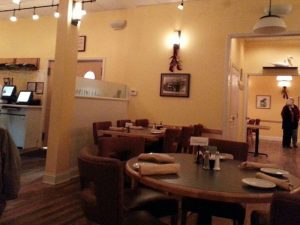 Some people believe that only sizeable towns can cultivate and grow exceptional restaurants. But one has only to dine once at Two Tree Restaurant in Millington, Maryland, to know that this is quite simply a myth.

Many people on the Eastern Shore zip past the town of Millington on the way north without bothering to stop and explore. Yet, this town of little more than 600 souls is located just a mile and half off U.S. Highway 301, less than an hour south of Wilmington.

Claimed by both Kent and Queen Anne’s counties, Millington sits at the headwaters of the Chester River, where Cypress Branch and Andover Branch become one. A large grain elevator shadows the town center, where there’s an antiques store and a bank, an old-fashioned hardware store and a hometown pharmacy. And, at the intersection of Cypress and Sassafras streets, there’s a restaurant of note.

The unassuming brick building that houses Two Tree looks as though it might house the local diner. Inside, there are three small dining rooms, with bright lemony walls and a collection of comfortable tables and chairs.

But just a brief glance at the menu reveals that there’s more to this restaurant than meets the eye. Regional fare populates the well-curated list, along with a few favorites from Italy and a smattering of dishes from the Deep South. The wine list covers lots of territory, too, with selections that range from a deep red Chilean carmenere to an Italian tempranillo.

Two Tree owner Dennis Hager doubles as the local pharmacist in Millington, but he grew up on a farm in North Carolina. Long an avid gardener, he grows many of the fruits and vegetables used at the restaurant.

It took us some time to sort through the many temptations on the menu, but we were especially hungry and elected to start immediately with an appetizer of fried oysters for the table. The succulent bivalves arrived with a crispy flour-based coating, fried to golden perfection, neither over nor undercooked, and coupled with a dreamy horseradish dipping sauce. If you love fried oysters – or if you ever thought you might like to try them – this is the place to do it.

Other stars on the appetizer menu include the crab dip, a creamy crabby mixture perfect for spreading on toasted baguette slices. Predictably, the cream of crab soup was lovely, but the savory, cream-based wild mushroom and truffle soup was truly heavenly. This concoction was even served with three tiny bread bowls brimming with melted brie.

A charming quirk of the Two Tree menu (and a testament to Dennis Hager’s Southern roots) is the inclusion of a section for so-called “Lunch and Supper Plates.” Though supper and dinner are often used interchangeably down south, there is a difference. By definition, dinner is the largest meal of the day, regardless of time, while supper is a lighter evening meal. If you want a smaller meal at noon or in the evening, look among the lunch and supper plates.

It’s important to note that these are smaller helpings, not necessarily lighter choices. Lunch and Supper Plates run the gamut from fried catfish with hand-cut fries, to liver and onions, to shrimp and grits. There’s an inspired pairing of fried oysters and chicken salad, which is defined as “the quintessence of an Eastern Shore supper,” as well as guilt-inducing lobster mac and cheese. Then there’s the Moravian chicken pie, a scrumptious version of pot pie.

The entrees are more generously portioned, but equally compelling. The steak au poivre was a towering masterpiece – a thick New York strip coated with crushed black pepper and cooked to order, then served with risotto and wild mushroom-brandy sauce. The dish was topped with a crown of fried leeks that were both beautiful and delicious – even this late in the meal, we could have consumed an entire basket of the tender, crispy shoots.

As our leisurely repast continued, we savored pork osso bucco, a slow roasted shank of pork that was perfectly tender and served with buttery homemade mashed potatoes and long leaves of spicy braised kale. The crab cakes were tasty, though somewhat lacking in lump crab. But the unanimous favorite was a dish of bay scallops topped with crab imperial, served with a slice of potato au gratin and a fan of grilled asparagus spears.

When the dessert menus arrived, it crossed our minds to pass. How could the meal get any better? But, the homemade pies and house-churned ice creams proved too tempting.

The lemon chess and pecan pies were sweet and gooey, evoking memories of long-ago holiday meals and family reunions. The cherry-almond crunch ice cream was tasty, but the frozen raspberry custard was the meal’s crowning glory. We sat licking our spoons, reveling in the final bites.

As we drove away, replete and content, we marveled at our good fortune at having happened upon Two Tree Restaurant. Every tiny town should be so lucky.

Over the next few months, we’re going to be sampling some of the region’s fare and we’ll share our insights with you. And since we don’t identify ourselves to the chef or staff of a restaurant, it pays to treat every diner as a Picky Eater.