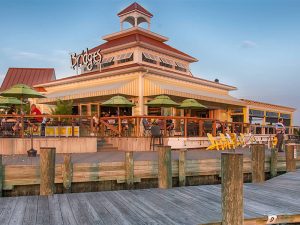 When we arrived at Bridges on Kent Narrows Restaurant in Grasonville on an unseasonably cool spring evening, one Picky Eater exclaimed, “Wow! I’d love to see this place in the middle of summer.”

Indeed. Bridges sits in the shadow of the Kent Island Bridge, which arches high over The Narrows, the waterway that connects the Chester River to Eastern Bay. Restaurants, hotels and condos line the narrow artery and beckon the millions of travelers who stream by on U.S. Route 50 each year. 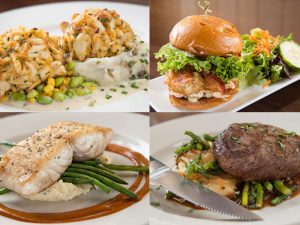 Long a haven for seafood lovers, The Narrows offers several excellent dining options. Last year, the Picky Eaters wrote about Harris Crab House, which remains a favorite. But Bridges Restaurant, located on the south side of the highway facing the Bay, might just be a place where we’ll be noshing more frequently.

Bridges spans the divide between old-fashioned seafood house and modern, sophisticated eatery. It occupies a handsome yellow building with a red roof and a soaring cupola that hugs the water’s edge. Both the oversized gazebo and the deck ringing the building offer outdoor seating and a million dollar view. Transient slips allow boaters to “dock and dine” and lend the place an authentic Chesapeake feel.

The restaurant’s interior features wood paneling, painted concrete floors and vaulted ceilings with oversized fans. The long, friendly bar that stretches across the front of the restaurant features live music every Friday and Saturday night. On the opposite end of the room, a gas-logged fireplace adds a warm, friendly glow. 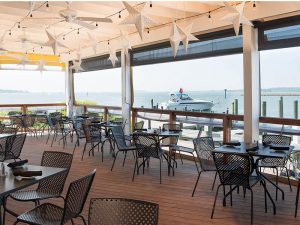 Star lanterns shine on a porch that runs along side the dining room and can be separated for private parties with sliding glass doors. A massive open kitchen stretches down the side of the opposite wall, offering plenty of elbow room for the busy chefs and cooks working the line.

An oyster shucker oversees a small raw bar that is shaped like the stern of a motorboat named Moon Shine. Skinny Dippers, Blue Points and Chincoteagues were among the offerings on ice the night we visited.

The centerpiece of the restaurant is an off-center chandelier, crafted from empty wine bottles (the contents of which were happily consumed by the owners who are dedicated wine lovers, according to the menu, which features a nice wine list).

By the time we arrived, the dinner hour was in full swing. The cacophony of talking, laughing, basketball and music was almost deafening, but it eased to a pleasant buzz after the peak subsided.

Chesapeake Bay seafood is definitely the star of a large and inviting menu and we elected to be traditional in our choices. We started, as we thought we must, with the Maryland crab and cream of crab soups.

The cream of crab had lumps of meat in a savory cream base, but begged for splash of sherry, which improved the taste and was worth the asking. The Maryland crab soup had a much-too-thick tomato base, but was full of flavor, sweet claw meat and vegetables.

The fried oysters appetizer was as close to perfection as you can get. The bivalves were fried crispy on the outside, but soft on the inside, and served with a fiery Remoulade sauce. Coconut shrimp are always a favorite and were quite tasty, but the clams sautéed in garlic and onion with Andouille were totally sop-worthy.

We elected to share a delicious Autumn Harvest Salad, as we craved the fresh greens, sliced apples, pecans and goat cheese as a prelude to more seafood. We noticed that many around us indulged in the Bridges’ pizzas, but we again took a more predictable route for our entrees.

The succulent lump crab cakes, mashed potatoes and tender green beans were accompanied by a rich puddle of beurre blanc sauce. This dish alone was worthy of a second visit. The local rockfish was perfectly seared, too, and was served with green beans and scented rice with a fresh tomato sauce on the side.

There were several options for non-seafood eaters, including a couple of steaks, but we went with the pork osso bucco. The bones lifted easily from the tender shank, creating a hearty concoction of pork, crispy potatoes and mushrooms, which was perfect for a chilly night.

We tried a bevy of desserts, but the tender butter-soaked whiskey cake topped with vanilla ice cream and drizzled with caramel was hands down the best. This old-fashioned treat brought our meal to a sweet ending and underscored our resolve to return on a warm summer day.