Follow along each month in Attraction magazine as Sprout takes readers on tours of Mid-Shore farms. They will share stories from the road as they gather fresh produce from area farms. Sprout provides individually portioned, ready-to-eat meals using fresh, local and organic ingredients, delivered directly to a customer. 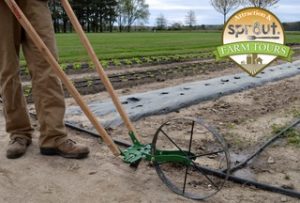 Few places on the Mid-Shore could be as picturesque as the waterfront property of the Lucas family where LeCompte Bay Farm sits at the end of Garden of Eden Road, overlooking LeCompte Bay in Dorchester County. On our first official Farm Tour, the Attraction / Sprout team traveled to Cambridge on an early Saturday morning to chat with Scott Lucas, a “true farming MacGyver,” according to Scott’s father. 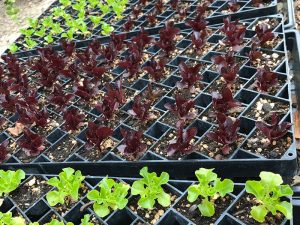 Ryan Groll, owner of Eat Sprout, and Scott Lucas, owner and farmer of LeCompte Bay Farms, both began a new chapter in 2016 when they started their businesses. Sprout became Scott’s first wholesale customer. According to Ryan, “Variety, flavor, nutrition and, above all, quality is Sprout’s main concern and LeCompte Bay Farm hits the nail on the head.”

Baby Bibb, Muir, and Red Oakleaf lettuces get some time outdoors to harden off before being planted at LeCompte Bay Farm in Cambridge. Scott Lucas plants seeds in trays, grows them for four weeks and transplants the lettuce in the ground for another four weeks.

At the end of last year, Ryan and Scott sat down and went through seed catalogs, planning the 2017 growing season. Each week Scott sends Sprout an availability list along with what they are expecting to harvest within the upcoming weeks. Ryan spends his Sunday walking Scott’s farm to collect what is needed for the following day’s menu. Ryan said, “As a customer of Sprout, you can expect quality and freshness as the ingredients they source are harvested that very day from LeCompte Bay Farm.”

LeCompte Bay Farm is a micro farm, defined as five acres or less, but do not be fooled by size. Scott is extremely thorough with an eye for detail. Every inch of his third of an acre farm is used for the highest quality yield. This season, Scott expects a wide variety of field greens, tomatoes, peas, carrots, beets, garlic, herbs and much more.

Scott practices organic farming and is currently becoming organic certified. Last year he had a successful yield on just a sixth of an acre and doubled his efforts for the 2017 growing season.

Growing up, Scott’s family always had a garden. They were amazed at how much good food could be produced from a small garden. In college, Scott studied biology and it wasn’t until a chance visit to Adkins Arboretum in Ridgely that the “seed” for a farm was planted. Scott purchased a book there called The Market Gardener, by Jean-Martin Fortier. In it, the French Canadian explains how small scale agriculture can be viable. Scott hasn’t looked back since.

Scott’s farming practices are simple, but with creative solutions he has developed higher quality root vegetables. With a skeleton crew of only Scott and his parents, organic material and a thought-out plan of action, Scott anticipates growing for multiple restaurants and the Cambridge Farmers’ market for 2017.

To learn more about his farm, visit Scott Lucas at the Cambridge Farmers’ Market on Thursday afternoons from 3 to 6 p.m. starting May 4, email lecomptebayfarm@gmail.com or to simply eat his amazing product, order Sprout. Contact Sprout at 443-223-0642 or visit www.eatsprout.com or www.facebook.com/eatsprout.