In Darfur, Africa a woman’s day begins with the arduous task of scavenging for firewood and this trek could take her as much as three to four hours. As she heads out into the bush and searches for small branches with which to cook her family’s lunch and dinner, she endangers herself with the possibility of encountering militant groups. Her search for fuel is exhausting, time consuming, dangerous and keeps her on edge until she can return to her refugee camp with enough wood for the day. A similar scenario plays out in neighboring refugee camps throughout this region for millions of women every day, except for those who are lucky enough to have a solar cooker. With an average of 330 sunny days in Central Africa, this means that a woman who owns a solar cooker can stay at home and engage in other important activities for her family 90% of the time. How liberating.

I read about solar cookers in a magazine several years ago and found them intriguing and have recently purchased one. Mind you, my purchase was not one of necessity but out of fascination. Never did I imagine the purchase of a solar cooker would prompt me to educate myself further on this clean technology and find myself reading a paper submitted to the United Nations Economic and Social Council specifically addressing the Commission on the Status of Women. Originally, I just wanted to learn how to cook with this curious contraption.

In March 2016, Solar Cookers International submitted a statement to the United Nations explaining the opportunity solar cookers provides to the poorest of women by empowering them: “Too many women – nearly 3 billion – still cook food and pasteurize drinking water with household fuels whose use damages their own health, their children’s health and the health of their habitants. As ecological pressures increase due to climate change, these damages accrue more intensely and more quickly in the most vulnerable populations. As women travel further and further from home to gather biomass fuel, they risk being attacked, raped or killed for the simple act of collecting fuel to cook food and make water safe to drink. As a growing population competes for a finite amount of wood, animal dung, or crop wastes, danger for women and children increases as they travel further from home and safety. Up to 40% of this energy provided by women is used to heat water, a use for which solar thermal technologies are particularly appropriate.”

Solar cookers have been distributed in this millennia by humanitarian organizations such as the Jewish World Watch Solar Cooker Project (read about it at jww.org). That project has been suspended, even though it was working, due to a shift in needs from lack of firewood to lack of food, but analysis showed the project was working. Solar Cookers International, which monitors solar cooker distribution (handmade, sold, subsidized or given for free), estimates there are 3 million solar cookers on the planet that impact 11 million people worldwide (solarcookers.org).

Solar cookers are used in virtually every country in the world, in both highly industrialized nations such as the United States, Germany and Greece and the poorest of countries such as Afghanistan, Chad, Peru and Haiti, to name only a few. Far, far away from here in a small town north of Santiago, Chile, a restaurant named Delicias del Sol Villaseca is cooking their meals with only the sun. In an area of Chile where wood is scarce, this restaurant relies on a less traditional natural resource for cooking and it’s been a successful endeavor.

Solar cookers come in all shapes, sizes and designs, but the three basic designs are panel, parabolic and box. Panel cookers, like the ones distributed in Africa, are relatively inexpensive to make: they are made of cardboard and tinfoil with a few grommets and strings for anchoring it in windy conditions. They include a plastic bag to wrap around the cooking pot to create a greenhouse effect. Panel solar cookers can generally reach temperatures of 250 degrees – hot enough to sterilize water and slow cook many foods. They can be folded into a compact square, are light and very portable. Box solar cookers, like the one I purchased from American Sun Oven, tend to be heavier and more awkward to transport but can generally reach higher temperatures than a panel cooker – about 350 degrees. Parabolic Cookers reach the highest temperatures and look like a satellite dish. If purchasing a parabolic cooker, they are the most expensive of the three designs and homemade versions are much more complicated than the other two styles. Parabolic cookers can reach temperatures over 400 degrees and can even fry food. Parabolic solar cookers have been used at the top of Mount Everest. Solar ovens can be used in cold climates if properly insulated and adjusted to the sun angle. All cookers will work even more efficiently in low humidity.

Cooking dinner is easy. For me, that is. I turn on my gas stove and I have instant heat. When I am finished cooking, I have fresh running water to wash my dishes either by hand or in my dishwasher. I’ve got it good and I’ll admit it; I love the ease and convenience of my kitchen. I am spoiled. For the 2 billion people on earth still cooking over a wood fire, dinner doesn’t come this easy, especially if you live in a refugee camp where wood is very scarce. So, in an effort to not only learn how to use my solar cooker, but to better understand the world we live in, my solar cooking experiments began.

My experiments began in February, which was probably not the best month to start a project like this, but I was very anxious. I had read that solar cookers could obtain high temperatures in cool weather but secretly I really didn’t believe it. On a cool 40 degree February morning, I went outside to set up my cooker. Placed on a piece of plywood on the ground, I turned it to the sun following all the directions on how to adjust it for maximum efficiency. Then, I let it warm up for half an hour. When I returned, the oven was sitting at 320 degrees.

Delighted with this discovery, I placed one dozen gluten-free orange chocolate muffins inside. One hour and 15 minutes later I pulled out a dozen fully cooked, moist and delicious muffins. Thrilled with the outcome, I was anxious to try baked apples. Normally I cook them for about an hour by conventional oven, but the temperature had fallen to 275, so I left them in for two hours. When I returned, the oven had gotten hotter so I ended up with applesauce. My children gobbled it up. Charged by my realization that I did indeed possess a powerful tool, I couldn’t wait to try cooking more food. To my disappointment, the next 10 days would test my patience as they were cloudy and windy. Finally, when the sun exposed itself, I was in awe of my ability to make hard boiled eggs and fluffy rice outside in February in 35 degree temperatures. I found it counter intuitive to don my oven mitts to walk outside and retrieve hot food, but the experience amazed me.

With the scientific community constantly under fire for their consistent insistence that global warming is real, I found my solar cooking explorations of great personal value in that the performance of my solar cooker not only was a tangible proof of real science at work, but a viable answer for many who are burdened by their place at the bottom of societies hierarchical energy ladder. Poverty and energy poverty are often synonymous. The energy ladder as pictured below is a highly visual representation of how clean each fuel is. The fuels at the bottom of the ladder, traditionally used by the poorest of people, pollute the air the most. With a solar cooker, even the most impoverished can skip to the top of the ladder. Solar energy is an abundant free never ending resource that transcends economic status.

Throughout the Spring I continued to use my solar oven to cook a variety of foods, including a whole chicken (In case you are wondering, it took 4 1/2 hours and was delicious) and smiled each time I grabbed the potholders to pull out my latest experiment. We have had several dinners by sunlight, perhaps a little less romantic than dinner by candlelight, but so much more rewarding. We, who can cook with ease in our modern kitchens still have the option to turn toward the sun and utilize a free zero-emission resource. I try not to become too comfortable in my easy bake kitchen. After all, human practices should ultimately correspond with the swift advancement of climate change. I have begun my practice by continuing to use my solar oven whenever possible and have concluded it’s time to take our sunglasses off and look to the sun, lest we overlook the most vital, clean and empowering resource of all.

United Nations Economic and Social Council, Commission on the Status of Women. March 2016 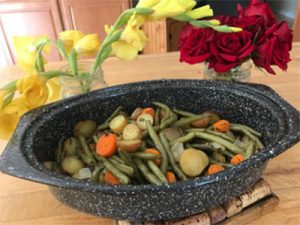 Fresh oregano, chive, and lemon thyme from my garden