Squatter’s Rights, the first book in the Eastern Shore Mysteries series was released on Amazon.com on Mother’s Day. A murder mystery may not seem like the best vehicle to honor mothers but when author Cheril Thomas saw the opportunity to launch her book on May 14, she was delighted. Relationships between mothers and daughters, the unintended consequences of parental love – and murder, of course – are all driving forces in Squatter’s Rights.

“My writing is often inspired by the stories that find me,” Cheril says. “Characters and ideas come from the oddest places. Strangers I pass at the mall, the couple two tables over in a restaurant, or a news headline – anything, really. I get an idea, it percolates a while and the resulting story is usually a world removed from the experience which sparked it.”

The spark that ended up as Squatter’s Rights appeared in the late nineties, when Cheril and her husband, Ron, contemplated opening a bed and breakfast. For months they looked at various operations that were up for sale and traipsed through old mansions in varying degrees of disrepair. Even though they eventually discarded the B&B plan, Cheril couldn’t let go of the memories of grand old houses that only needed the right person – and a lot of cash – to return them to their former glory. The notes she took during those months nagged at her until 2011, when she started writing Squatter’s Rights. Her favorite of all the potential B&B locations became Delaney House, the setting for the first book in a mystery series set on the Eastern Shore. 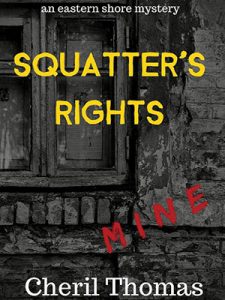 “My husband and I are both real estate junkies who have lived in the same house for nearly a quarter century, yet still read all the ‘property for sale’ ads and love a good open house. When I decided to write a mystery series, I knew it had to have a real estate theme and involve the old mansions from the happy summer we spent on the B&B hunt.”

Although the earliest outlines and drafts which would eventually become Squatter’s Rights were started in 2011, the book didn’t see publication until 2017. “The plot and main characters ran right out onto the page,” Cheril said. “The tricky part was coaxing the intertwining stories, which are set over a six-decade time span, to flow as one.” At the time she was creating Squatter’s Rights, Cheril was also developing the Eastern Shore Mysteries series story line and writing short stories. “My writing was scattered in the early days of the series. I wrote a lot but didn’t finish much of anything,” Cheril admitted.

The biggest diversion to the completion of Squatter’s Rights came in early 2015 when she was approached by local author Susan Reiss and asked to co-author a mystery serial to be published in Attraction magazine.

“Susan and I were members of a writing group, but we didn’t really know each other and had never worked together,” Cheril said. “I was immensely flattered, of course. Susan is a well-respected writer and I loved her Silver Mystery series. The year I spent with her and the wonderful folks at Attraction while co-writing the Whispers serial was amazing. I learned so much and had a blast. I mean, how many authors have publicity cocktail parties where the drinks are named after the characters they’ve created?” But while Whispers unfolded in the 2015 editions of Attraction and then went into print as a paperback in 2016, Squatter’s Rights languished in the bottom drawer of Cheril’s desk.

When she returned to work on the book in the spring of 2016, Cheril realized the various versions added up to several thousand pages and she wasn’t happy with any of them. “I had a draft in first person narrative, another in third person narrative with multiple points of view and a version where the 1950s and 60s storyline was predominate. It was time to decide what I was really trying to write and get on with it. That’s when the slashing and burning and wringing of hands started.”

Cheril gives credit to her editor for recommending the direction of the final version of the book. In her Author’s Notes for Squatter’s Rights, she writes: “My wonderful story editor, the legendary Helen Chappell, was amazing. She was unfailingly kind every time she sent me back to the laptop to cut, cut, cut. Her edits and suggestions made me a better writer.” The final rewrite took four months. Then came the giant learning curve needed to navigate the worlds of eBook publishing and formatting and cover design for the paperback.

“I avoided the publishing end of the project for as long as I could,” Cheril says. “When I finally got serious and delved into it, I found I enjoyed the process. Well, enjoyed may be too strong a word to describe the hair-pulling frustration that came as I screwed up one design after another and formatted the second half of the book upside-down, but it was a learning adventure. Ron still avoids the kitchen table when he sees me hunched over the laptop, but I’m sure the scars will fade in time.”

Cheril says she’s eager to try her hand at the publishing process again. “But that means another book, so I’m focused on writing these days. Commission on Murder is in production and I’m having a blast sending the returning characters from Squatter’s Rights into new disasters and seeing what kind of trouble they get into.”

Commission on Murder is scheduled for publication in late 2017. Squatter’s Rights is available in eBook and trade paperback on Amazon.com. Whispers is available in paperback at local bookstores. Find out more about Cheril Thomas and her writing at www.CherilThomas.com and on Facebook, www.facebook.com/cherilthomasauthor.

There’s a grave in the woods behind the grandest house in town.

Three hundred years of history are in the beams and crumbling plaster of Delaney House. Seven thousand square feet of trash and dirt cover secrets, lies and at least one murder. Julia Reagan dreamed of saving her family home but time ran out. Her dying wish sends her daughter, a Washington attorney, to Maryland’s Eastern Shore to renovate the decaying mansion and deal with the relatives who never left the little village on the Chesapeake Bay. Before she can buy the first can of paint, Grace finds a grave, a murder and tantalizing clues to her own hidden past. If you like a good murder with family drama and historical events that won’t stay in the past, you’ll love “Squatter’s Rights.”

Welcome to the Eastern Shore!