We all are shedding a tear after the recent departure of Marie U’Ren and her husband Bill, leaving Easton after nearly 24 years to resettle in Towson, nearer to family. Marie’s role in our community has been impactful in so many ways, serving on numerous boards and volunteering for everything that came up that would make Easton a better place to live, including picking up stray trash on the streets and sidewalks.

But, one particular role she played touched the lives of many of us as actors, audience members and parade watchers – her role managing Easton’s “costume central.” Below ground, for a number of years, in a basement under Easton’s Main Street and, most recently, in the Hanson Street Professional Center, Marie saw to it that parade revelers, as well as the Mid-Shore’s actors and actresses, had the proper attire to entertain us all.

Her passion for costumes began in 1995 after she was asked to help make costumes for Easton’s first holiday parade for a “Dickens of a Christmas.” Marie recalls, “We made Dickens-era costumes for the parade because costumes were so expensive to rent.” She adds, “Before we knew it, theater groups began borrowing the costumes for their productions of ‘A Christmas Carol’ and the collection grew. We stored everything in the third floor of my house. My husband has been very supportive of my passion.”

In 1998, Marie remembers that a number of costumes were made for the Habitat for Humanity’s “Follies” and the costume collection quickly outgrew her house. Storage space was then donated in Talbottown for the collection before it was relocated to its basement location in downtown Easton, where it remained until 2014.

When Marie first showed me the collection of costumes stored underneath Easton’s Main Street, at first glance, I felt as if I had arrived in an underground hideout – not unlike Seattle’s Underground (a city beneath a city). Racks of vintage clothing, hats, shoes, jackets, shirts, skirts and dresses from every period in history filled brick-walled rooms beneath the streets. 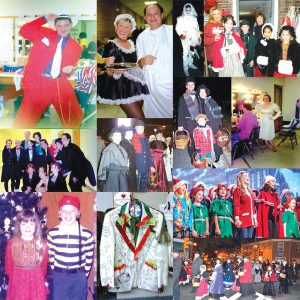 Marie, who was an organized person and who could sew, found herself backstage helping with a number of the region’s productions. She credits other women, however, in helping with costuming over the years, including Kate Levey, Nancy Fox, Lori Hester, Stephanie Handy, Kathy Dawkins and Robin Valliant, making new costumes, helping with fittings and keeping the costumes organized.

But, it is really Marie who knew who had signed out the popular flapper dress or the Santa Claus suit. Over the years, in addition to a sign-out sheet, she began to ask that organizations using the costumes make a donation to support the monthly rent that had to be paid to store everything. Initially, she and her husband funded the project and then the Talbot County Arts Council supported her efforts through grants. Eventually, Eventful Giving Talbot provided funding through special events, organized in part by the efforts of Debbi Dodson, Todd Albrecht and Kathy Witte. Today, the Mid-Shore Community Foundation is managing a component fund that has been set up to keep the effort going.

The costumes that have been amassed for the collection have come from such places as the Christ Church Rummage Sale, the Memorial Hospital Bazaar, the Cambridge Salvation Army, St. Mark’s Thrift Shop, Easton’s Goodwill Store and McCord’s Laundry, which closed a few years ago.

Marie, who is a self-taught costumer, remembers growing up in a military family who moved a lot. In third grade, she recalls taking dance lessons and asking her mother about buying her a dance costume for an upcoming recital. Her mother said they simply couldn’t do it. She reflects, “I guess I have made up for it ever since. By starting this, no one would ever have to experience not being able to participate in a production because they didn’t have a costume.”

When asked about her love of costuming and leaving this important role she has played in our community, Marie states, “I just liked doing it and before I knew it, it had grown ‘like Topsy.’ ” She adds, “It’s quite unusual to have a costume shop like this in a small town.”

Ross Benincasa, Manager, Easton Business Alliance, comments about Marie’s costume shop, stating, “We don’t want the costumes to disappear and are working on how to keep the costuming going as it is integral to the schools, Crashbox Theater Company and the Avalon Theatre, to name a few.”

Noting that Marie does the work of 10 people, Ross adds, “People don’t realize that Marie made sure the costumes were there for all the productions in Easton. When I first met her, she told my fiancé that she had 13 wedding dresses and I wondered what she meant. Now I know.”

Marie has been behind the scenes in Easton making it a better place for almost 24 years. Her care for our community knew no bounds and she will be missed.