What is the best sport for any age of adult interested in getting healthy while enjoying the beautiful natural resources of our area? Looking for either a team-building or solitary experiences? Want to be challenged or seeking meditative serenity? Why not try rowing? All one has to do is be willing and able to get in the boat. 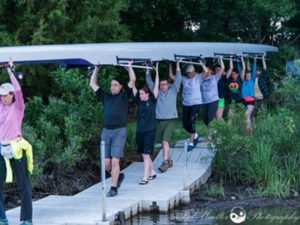 According to the national governing body, U.S. Rowing, of over 23,000 members, 14% are over 50 years old. As well, approximately 25% of the competitors were older than 50 at this year’s national Head of the Charles Regatta, which boasts an age range between 14 and 85.

However, regardless of your age and personal experiences, rowing does require more than a few sessions of instruction before you can jump in a rowing shell. But right here, under our noses, is Talbot County’s newly formed Eastern Shore Community Rowers (ESCRowers) is offering free Learn-to-Row lessons for adults of any age (over 18 unless accompanied by a parent), every first Saturday through November, and on-going three-day clinics throughout the season for $75.

Once one gets his or her feet wet, so to speak, quarterly ESCRowers membership allows one to join in rowing shells of eight, four, doubles or singles, six mornings a week at Evergreen, located at Easton Point, 770 Port Street in Easton.

Why are more adults taking up the sport? More than just a fad, rowing has been around for centuries, and although there are records of races in the U.S. dating to the 1700s, the country’s first real club was founded in Providence, Rhode Island in 1838. It’s noted in the PBS special “Boys of ‘36,” that thousands of spectators lined the East Coast rivers for collegiate regattas, because for many years it was even more popular than football. Today’s Head of the Charles touts more than 8,000 athletes from around the world who compete in 55 different race events.

The popularity amongst adults has been growing steadily in the U.S., perhaps even more so after Title IX was signed into law in 1972, prohibiting sex discrimination in any educational program or activity receiving any type of federal financial aid. This then allowed more women to compete in sports, including rowing, which gave way to more high-school and college clubs, more regattas, and as the colligates graduated and left school, more adult rowers and more adult rowing clubs, otherwise known as “masters.” There is also another byproduct from student rowers.

“I took up rowing in California years ago when my daughters rowed in high school,” says Penelope Dwyer, a founding Board Member, now 61. “I tried it for fun and have since been rowing whenever and wherever I can. When I retired, returning to the shore 18 months ago, I thought, all this water – why the heck don’t we have an adult rowing team?” Now, thanks to a bold few and ever-growing enthusiasm, Talbot County has ESCRowers, Talbot’s very own masters’ club.

“Another plus to rowing,” shared Bob Greenlee, “is the powerful team dynamic and camaraderie. In team sports, during the heat of the moment, you get to know your teammates well and deeply. And the ESCRowers group is as fine a group of people as there is on the Shore. There is also a great incentive in early morning rowing … once you commit, there is no more snooze on the alarm clock. If you leave a seat empty, you will hear about it. Plus, there is no better way to start the day!”

But whether one prefers rowing in a shell with others or simply sculling on one’s own for the peace and quiet, it’s an excellent way to enjoy the area’s gorgeous watershed and get in shape. According to founding Board Member and nurse Terry Gleim, rowing is extremely healthy for adults. “Rowing is very much an all-body sport, known to build muscles and stronger bones, as well as increase blood circulation and oxygen intake. It’s a great way to build strength and stay healthy.”

Longtime Tai Chi and yoga practitioner and ESCRowers Board Treasurer, Howard Parks, encourages rowing for the mental as well as the physical health. “Rowing complements yoga. It strengthens your core and encourages mindfulness. To row well, your mind has to be with your oar in the boat; at the same time, you can lose yourself on a beautiful stretch of river.”

ESCRowers shares a floating dock with the youth group Freedom Rowers, both hosted by Evergreen Easton Point, 770 Port Street. The high school rowers take to the water after school, while the adults row in the morning. ESCRowers is offering two sessions this season, an early 5:30 a.m. row, for those practicing for racing season and for those needing to get to work earlier, as well as a 7 a.m. row for those who have more flexibility. Both rows run a little over an hour, and while both sessions require experience, ESCRowers’ three certified coaches are highly encouraging, the members are very welcoming, and the program is offering even more learn-to-row opportunities than last year.

“This is our second year on the water,” says Chloe Tong, 25-year old President and Head Coach. “We have grown leaps and bounds in our first year and I’m very proud of what we have gained. Our focus this year is to join other teams in Maryland and neighboring states for racing season, as well as to expand our rowing practices to a wider audience. We would like to encourage greater diversity and are reaching out to groups such as those in cancer recovery or anyone needing team support. It’s a wonderful program for spirit and body, not to mention just a super way to kick-start the day!”

ESCRowers is a non-profit Rowing Program for All, supporting diversity, healthy waterways and a healthy community  – one stroke at a time. For more information on how to join, or to make a tax-deductible donation, visit ESCRowers.org or email ESCRowers@gmail.com.