On April 6 through 8, 2018, the YMCA of the Chesapeake hosted its inaugural Spring Fling Pickleball tournament. There were 134 pickleball players from around the Mid-Atlantic at the YMCA at Washington Street in Easton to participate in the event. Participants represented six states as well as Washington, D.C.

First introduced in 1965, pickleball is the fastest growing sport in the country. It’s a racquet sport that is a cross between tennis, badminton and table tennis. It is played on a court the size of a badminton court, with a net similar to a tennis net. The paddle looks like an oversized table tennis paddle, and the ball is like a whiffle ball. It is played both indoors and outdoors. 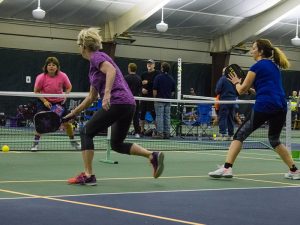 The United States of America Pickleball Association (USAPA), the sport’s governing body, reports that there are close to three million pickleball players. Currently, the sport of pickleball is exploding in popularity and the number of places to play has more than doubled since 2010 with nearly 4,000 locations on the USAPA’s “Places to Play” map. The spread of the sport is attributed to its popularity within community centers, PE classes, YMCA facilities and retirement communities. The sport continues to grow worldwide as well with many new international clubs forming and national governing bodies now established in Canada and India.

There are hundreds of tournaments played every year all around the country, highlighted by the USAPA Nationals and the U.S. Open tournaments that draw around 1,400 players each. The Mid-Atlantic region is loaded with pickleball clubs and players. The YMCA of the Chesapeake has active programs in most of its locations with hundreds of players ranging in age from early teens to 80s, and skills from pure beginners to tournament level players participating.

There are a couple stories about why the sport is called Pickleball. According to co-founder, Joel Pritchard, his wife started calling the game pickleball because “the combination of different sports reminded me of the pickle boat in crew where oarsmen were chosen from the leftovers of other boats.” However, according to co-founder, Barney McCallum, the game was officially named after the Pritchards’ dog Pickles who would chase the ball and run off with it. Either way, the name pickleball stuck.

The Spring Fling pickleball tournament was a true success, in part, to YMCA Pickleball Ambassadors, Nick Papson and Mike Jump, assisted by Wendy Palmer, the Director of Operations at Y @ Washington, and supported by both staff and a host of volunteers from the YMCA members and the YMCA Leaders Club.

The tournament started with open social play and practice on Friday evening. Tournament play in both men’s and women’s doubles occurred on Saturday and mixed doubles was held on Sunday. The play was terrific, being very competitive at all levels. The sportsmanship on all counts was exemplary. There were several nationally ranked players among the group, some having medaled in the US Open, USAPA Nationals and the Huntsman Games in Utah.

The YMCA looks forward to hosting more pickleball tournaments in the future. For more information, call 410-822-1515.

YMCA of the Chesapeake Medal Winners 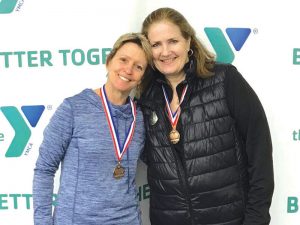 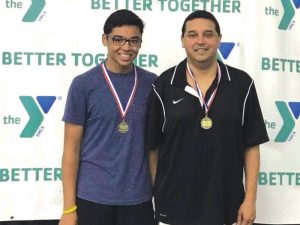