Every spring hoards of dandelions are sentenced to death. Television commercials for weed killers often feature the dandelion as an example: “Just a few squirts of this herbicide and your weeds will be gone!” the advertisers boast. What I would like to know is where in history did the dandelion turn from friend to foe?

The dandelion, Taraxacum officinalle, is a prolific breeder and can be found growing in almost any conditions from lawns to fields, meadows to mountainsides, ditches, edges of marshes, cracks in the sidewalks, and on the fringes of driveways. Its name comes from the French term dent de lion, or tooth of the lion as it’s named for the tooth like appearance of its leaves. True to its name, the dandelion has certainly sunk its teeth into the North American landscape.

The dandelion was brought to our shores, most likely, by the early settlers, the Puritans. It was not by accident but on purpose. About 400 years ago, the dandelion was viewed much differently than it is today. It was a trusted medicinal plant and helped alleviate many ailments settlers faced in the new world. Europeans used the plant to treat fevers, boils, eye problems, diarrhea, fluid retention, liver congestion, heartburn, and skin ailments. Dandelions were also well known to ancient Egyptians, Greeks and Romans, and have been used in Chinese traditional medicine for over a thousand years.

All parts of the dandelion plant are useful, and its versatility does not disappoint. The bright yellow flower can be used to make dandelion tea and wine. The blossoms can also be gently sautéed in butter for a fine crunchy flavor reminiscent of that of a fried mushroom. The stem becomes useful as a means to battle warts. A few drops of this acrid milky looking liquid found in the stem, squeezed onto a wart several times a day for a few weeks will eradicate the virus.

The leaves are a superfood with one cup boasting 535% of your daily potassium and 112% of your vitamin A. The leaves are best picked young and tender as they can be bitter, especially as they age.

According to Rosemary Gladstar, author of Medicinal Herbs, A Beginners Guide, “The leaf has long been used as a mild diuretic in cases of water retention and bladder or kidney problems. Unlike synthetic diuretics however, dandelions are a good source of potassium and replenish rather than deplete this important nutrient. The leaf is also a good source of iron, calcium, vitamins and a rich assortment of trace minerals. In fact, dandelion greens are a treasured food the world over. Throughout the Mediterranean they are steamed, often with other wild greens and served drizzled with olive oil and lemon juice.”

If you think you have never tried dandelion green before, you might be mistaken, especially if you have eaten mesclun. Mesclun is a salad made from a selection of lettuces with other edible leaves such as dandelion greens, mustard greens, and radicchio. Arugula, also a bitter green, has become quite popular in the culinary world lately, could dandelion greens be the next big trend? I have found dandelion greens to be less bitter than arugula.

And author of The Complete Book of Herbs and Spices, Sarah Garland, explains that the dandelion root, roasted and dried can be made into a coffee substitute for those trying to kick the caffeine habit. The root can also be used to make tea, to promote urine (diuretic), for improvement of kidney and liver disorder, or as a mild laxative. It also acts as a digestive, stimulating gastric juices and increasing appetite.

Medicinal and nutritive properties aside, the dandelion’s adversaries will still want to find a way to rid their lawns of this plant. “It wrecks my lawn!” they chant. When in actuality, according to a study from Columbia University, “The dandelion has a low ecological impact and provides no real damage to the ecosystem. The major negative aspect of the dandelion is the difficulty in exterminating it in yards or places where people do not want the plant to grow.”

Anita Sanchez, author of Teeth of the Lion – The Story of the Beloved and Despised Dandelion, explains why dandelions are good for a lawn. “Their wide-spreading roots loosen hard-packed soil, aerate the earth and help reduce erosion. The deep taproot pulls nutrients such as calcium from deep in the soil and makes them available to other plants. Dandelions actually fertilize the grass.”

Let’s not forget that birds eat dandelion seeds and honeybees feast on the pollen and nectar they provide. Still dislike the dandelion? The National Institutes of Health has been studying aqueous dandelion root extract (DRE) and its effects on colorectal cancer. Initial test results in 2016 were very promising, prompting further study. “DRE could be a non-toxic and effective anti-cancer alternative, instrumental for reducing the occurrence of cancer cells drug-resistance,” claimed the authors of the study.

Somewhere in the 20th century perspectives on the value of the dandelion changed. Tables turned on this bright yellow beauty, yet despite the attempts by lawn perfectionists to eradicate this valuable plant, it is a survivor, it is persistent. Since it is highly unlikely it will bend to the will of its enemies, perhaps it’s time perspectives be altered. Maybe this perennial returns year after year hoping that we may finally get the message, “I am valuable, take a deeper look.” If beauty is in the eye of the beholder, then we should ask ourselves what is beautiful? I find the constellations in the night sky very beautiful. The dandelion, as it emerges in the spring reflects this visual above as it dots our landscape with shining yellow flowers too bright to ignore.

If we pay close enough attention, we will see that nature makes a statement time and time again. Cities stop because of blizzards, commerce halts because of hurricanes. Open your eyes to the possibility that nature provides answers we are too blind to see, and they may be right in front of our eyes, right in our own backyard. I’m back, the dandelion boasts, pay attention!

Still not convinced? Then pick up a dandelion seed head, or “puff ball” as I used to call them when I was a child. They won’t be hard to find, they are literally everywhere. Make a wish like you did when you were young. Close your eyes and blow the seeds into the wind. Maybe your wish will come true, after all there seems to be something magical about the dandelion.

Wash and chop greens. Whisk three parts oil to 1one part vinegar, add salt and pepper to taste. Drizzle over the greens. Sprinkle feta and strawberries on top. Sprinkle with scallion tops if desired. 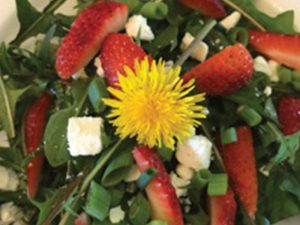 Sanchez, Anita. Teeth of the Lion – The Story of the Beloved and Despised Dandelion

Garland, Sarah. The Complete Book of Herbs and Spices.