The Talbot Figure Skating Team (TFST) is pleased to offer Synchronized Skating each year. Synchronized Skating (Synchro) is an ice sport involving eight to 20 skaters performing as one unit, rather than as individual skaters. A synchro skating team incorporates elements such as circles, wheels, lines, blocks, and intersections in a precisely choreographed routine set to music. A synchro team offers figure skaters an opportunity to participate in a group activity, make new friends, and learn to work together. 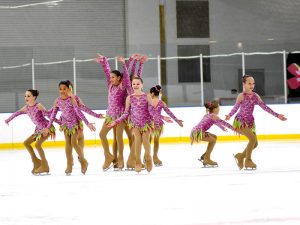 Figure skaters learning to work together benefit from the accomplishments of the team and share in the experience and energy of each dynamic age group. In addition, these polished skating skills can be carried over as an asset when skating in other group skating scenarios, such as in an ice show or with a production team. By skating with a group, the skaters will achieve team goals where everyone wins.

The ability to skate and perform in unison requires a strong background in the fundamental skills of skating on edges, performing turns and steps with full control, as well as a combination of stamina and an ability to consistently perform in exhibition and competitive situations. The final combination of skaters selected for a team will result in a group of individual strengths that can be molded into a unified group of skaters who will perform as single unit. The longer a team skates together, the more cohesive a team becomes. TFST Synchro’s intention is to build teams of longevity. Over time, each team’s skills will be pressed to perform an intricate program to ensure that their age group’s choreography continues to grow in complexity. However, each season the number and age range of skaters interested in Talbot Figure Skating Team synchro varies so the club continues to recruit interested skaters.

Synchro teams are typically formed based on those that attend the new season’s assessment clinic in September. Talbot’s experienced coaches evaluate a skater’s current level of skating skills and determine the potential to perform with a certain team’s planned elements in unison. In addition, the coaches use this time to assess the range of skater heights, levels of technical skills (footwork), and ability to skate cohesively with others. An important asset is how quickly each individual skater can learn a step demonstrated for a synchro routine. This season, TFST is proud to host three synchro teams ranging in age from six to 17. In addition, the synchro teams are stretching out and applying their performance skills to form a new Production Team.

Production is both a competitive and show event for groups of eight or more skaters. At competitions, production teams are judged on the performance value of their program. While there are no required skill sets or technical scores for this event, the group is judged on its use of music along with decorative costumes and props to enhance the theme while creating an entertaining performance. All skating levels and ages can join a production team. Talbot’s inaugural team hosts 27 skaters and is looking forward to competing in early 2019.

Watch for upcoming Talbot Figure Skating Team’s Shows to be announced soon at the Easton rink.