I am not known to fall prey to the latest and greatest kitchen gadgets. It’s not in my nature. However, with the holidays omnipresent, one cannot help but be visually and aurally bombarded by television and radio commercials about the newest kitchen gadget must haves. Perhaps before we run out and purchase a new countertop appliance, we should pause for a minute and think about kitchen gadgets we already have and don’t utilize – items that are certain to enter a yard sale in the future. You know, the items that are hidden in dark corners of your cupboards gathering dust … one might even go so far as to compare these forgotten gadgets similar to Rudolf’s Island of Misfit Toys. Appliance relics often succumb to donation without a fight or at least a hesitation. When was the last time you broke out your fondue set, and do you own an electric knife?

In an effort to resist new purchases, I began to revisit and revitalize a few appliances of my own. In doing so, I have rediscovered the amazing versatility of the slow cooker. My new-found fondness this electric marvel has guaranteed it a place in my kitchen. While many countertop appliances of 1970s like the Presto hot dogger and peanut butter machine have disappeared from kitchen counters, the slow cooker has had staying power. In fact, the slow cooker market is poised to grow at 8.27% through 2021, according to The Business Journals, driven by a growing demand for slow cooked food. 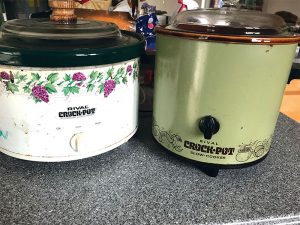 The name brand “Crock-Pot” was patented in 1940 by Irving Nachumsohn (he went by the surname Naxon). He reportedly got his inspiration for inventing the Crock-Pot from his Lithuanian mother. According to an article in The Huffington Post by Alison Spiegel, “Naxon’s mother had told him stories about a bean-based stew she used to make in her village bakery at home in Lithuania. The stew, known as cholent, is a traditional Jewish dish that cooks all day. It’s rooted in the Jewish Sabbath, the day of rest in which observant Jews aren’t supposed to do any work. The stew is supposed to go on the heat before sundown Friday night, when the Sabbath begins, and cook all the way until the end of Saturday services the next day. Naxon’s daughter told NPR that, “as the ovens were turned off for the Sabbath, the pot of cholent would be put in the oven, and that slow residual heat over the course of the 24 hours would be enough to cook the cholent.”

Slow cookers sunk their teeth into the appliance landscape in the 1970s. According to Consumer Reports, slow cookers, often called Crock-Pots after the original, may seem like a throwback to the 1970s but it turns out that twice as many households use one today as did just a generation ago. However, they may not look the same. Wood grain, avocado green, and harvest gold colors disappeared by the 1980s to be replaced by stencil style flower images and appliance white. Stainless steel is the look today and if you’re into slow cooker football tailgating, you’re in luck. The NFL partnered with Crock-Pot in 2012 to have all 32 team logos available on the slow cookers. Max Ehrenfreund, a reporter for The Washington Post, wrote an article about the history of the Crock-Pot and the “still-raging debate about how consumer appliances have changed – and failed to change – the gender balance at home as well as work.” But that is another column altogether.

I’ve been limited in my Crock-Pot cookery knowledge. Crock-Pot chicken is a favorite, and the occasional pot roast are all obvious choices, but I needed to broaden my horizons and see what else could be made. As it turns out – almost anything! I made meatballs, apple cobbler, overnight grits, traditional baked beans, chicken stew with pepper and pineapple over rice. I also made squash and apple bisque. Even hot drinks are possible, like a hot buttered rum or wassail.

Besides expanding my repertoire of slow cooker creations, I wanted to figure out how using a slow cooker could improve my holiday experience. I like to cook and enjoy making traditional holiday favorites. However, I do spend a tremendous amount of time in the kitchen at Christmas. With the goal of freeing up one afternoon for sipping tea and visiting with friends I began to test some holiday possibilities. Turns out, with just a half hour of prep time you can have a holiday turkey dinner in the slow cooker.

So, if you love slow cooked food and would appreciate a little extra time this holiday, consider revisiting an old friend – the Crock-Pot. What’s old is new again and with a little slow cooker practice maybe you too can free up an afternoon for a favorite board game with friends and family.

4-5 pound boneless turkey, thawed. Place turkey in the bottom of the Crock-Pot. Pour in 1/2 cup of vegetable or chicken stock. Separately, prepare 4 cups of cooked jasmine or basmati rice and 1/2 cup of wild rice. Combine the rice and add: 3/4 cup of dried cranberries, 1/2 cup diced onion, 2 TBS rubbed sage, 1 TBS roasted garlic, 1 TBS dried thyme (if you have fresh, even better), and salt and pepper, to taste. Mix thoroughly and place on top of the turkey. Cook about 3-4 hours on high or until the internal temperature of the turkey is 165 degrees.

tea ball with about a dozen cloves

Combine into Crock-Pot. Heat at high about an hour. Serve hot in mugs. Add some bourbon, if desired.

As easy as they are to use, slow cookers can pose a health risk if the food is not cooked properly. The Federal Food Safety and Inspection Service recommends the following: