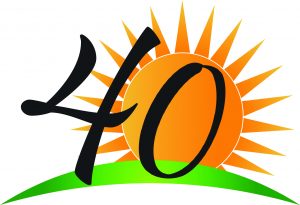 When the Attraction staff began brainstorming historical and unique stories that we could feature in our special 40th Anniversary edition, we knew that we had to share this one. In 2007, a chance encounter led an Easton man down a path toward becoming what we are calling “Attraction’s Super Fan!”

In that year, Bob Rothgaber had moved to Talbot County, living in what is known to be Easton’s oldest home (c 1725). Originally from Baltimore, Bob is a former middle and high school math teacher and a lover of collecting things. His life itself is quite an interesting story and his home is filled with many intriguing items. Most intriguing to us is his Attraction magazine cover art collection. 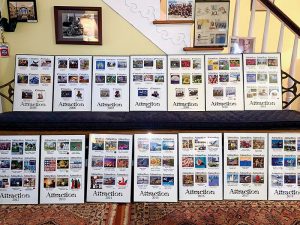 One day, in late 2007, Bob was doing personal business at a local shop, Laser Letters, in Easton. There at the same time was Attraction’s then-owner, Richard Slaughter, who was picking up a print order. As Richard often did, he struck up a conversation and Bob was curious about the item Richard had in his hand. Bob recalls how Richard explained to him that at the end of every year, he printed out a poster to be framed of all the magazine covers that had been published that year. At the time, Bob was not familiar with the magazine but he found the concept fascinating and asked Richard if he could have one. “I’ve always liked to collect stuff,” says Bob. “Through the efforts and kindness of Richard, and Judi and Bud at Laser Letters, I was given not only that year’s poster but also the ones printed the previous two years so I would have a complete set.”  With that, Attraction’s Super Fan was born!

Now an avid reader of the magazine, Bob picks one up whenever he finds them around town. “It’s a very professionally done publication! The whole affect is very pleasant and I enjoy the little stories. Meeting Richard and the conversation about the poster made me a reader, as well as a collector,” says Bob. Bob has every year of the poster that has been made from 2005 to 2018. As something that started just for Attraction staff to be able to look back on the year’s work, we find it heartwarming to know that a community member such as Bob Rothgaber finds value in it, too. Thank you for being a Super Fan, Bob!