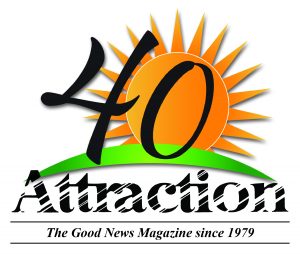 While over the past four decades there have been plenty of hard times – the tragedies of the 70s, the international shifts of the 80s, the technological changes of the 90s, and increased terrorism in the 2000s and beyond – there has been a voice that has focused on the “Good News” in our communities. Attraction magazine was founded in 1979 by Louise Hawkins as an insert in the Howard County News, primarily covering social and sporting events in Howard County. It was published every other week. Louise, a graduate of University of Maryland School of Journalism, was editor of the Central Maryland News in Howard County.

In the early ‘80s, Louise and her family were living on the Eastern Shore and she also wrote for the Star Democrat and Daily Times. Sometime around 1983 (date unclear), she decided to move the magazine to the Mid Shore, preserving its shape and feel as a newspaper insert but changing to a monthly publication. While its newsprint format reflected its roots, the magazine’s tagline changed at this time from “The Bi-Weekly Arts, Leisure and Entertainment Magazine” to “The Good News Magazine.” Louise commented during Attraction’s 25th anniversary in 2004, “There was so much bad news. I knew that people would want to read about good news.”

Louise’s daughter, Tara Hawkins Moore, an artist who regularly contributed to the sketches in the magazine and artwork for its cover, recalled, “My mother was a positive thinker. In the 60s and 70s when there were lots of bad things going on, she wanted to create a balance to all of it. There weren’t many professional women doing this at the time. She was a one-woman band.”

In 1997, after leaving a very successful career in broadcast journalism, Richard Slaughter became partners with Louise Hawkins in Attraction magazine. He continued to work with her for several years until she retired and he purchased Attraction in 2002. Before his death in 2017, Richard recalled, “Attraction was a one-person operation. Ms. Louise did it all on her own. She sold the ads, wrote the articles, and did all the layout (which still at this time was done the old-fashioned way by paste up). Then, after printing, Ms. Louise would hand deliver more than 4,000 copies. This was all being done by one individual, who when we met had just celebrated her 77th birthday! Just on the surface, I knew Ms. Louise was my kind of person.”

When Richard joined Louise, the magazine only published six issues – April/May, June, July, August, September/October, and the November Waterfowl issue. At that time, the layouts were done by hand. There were no digital files and all the articles had to be retyped and photos had to be copied. Richard’s wife, Harriett, recalls, “Louise knew nothing about the computer. Her tiny office had a whole wall full of different colored sticky-notes and that was how she kept track of the ads and editorials she wanted to use in each issue.”

The first year with Richard onboard was very successful and the magazine increased ad sales by nearly 95 percent. In 1998, Attraction had its first separate December issue, using original cover art done by Tara Hawkins Moore, which included whimsical labs getting into holiday mischief.  The readers loved the covers. Tara’s artwork, which included sketches of birds and geese, also continued to appear randomly throughout the magazine as it had when Louise managed it. One shorebird continues to show up even today. It is in every issue and is referred to as “The Lucky Bird.”

In 1999, Louise Hawkins was honored with the Business Woman of the Year Award from the Talbot County Chamber of Commerce. Richard reflected about Louise, “Business continued to grow and our friendship and respect for each other grew as well. By the beginning of year three, Ms. Louise told me, ‘Richard, you can call me Ms. Weesie, a name only a few are allowed to call me.’ That was a special moment in our relationship.”

Tara credits Richard with keeping her mom, Louise, going by working with her in her final years as the magazine transitioned its ownership to him and Louise began to explore retirement. Tara stated, “I loved Richard for what he did for my mother.”

The magazine continued to grow and to have a larger presence in the local community and the Mid Shore area. Louise, Richard and his wife, Harriett, who had started to do proofreading of the articles and attending events with her husband, worked as a team. In 2004, after Richard officially purchased the magazine, Jennifer Latham was hired to handle the editorial side, including layout design and writing, for the magazine. She also helped Richard and Harriett in covering events on the Mid Shore and in delivering magazines. Jennifer reflects, “After each issue hit the street, Richard and I would always marvel at a job well done with such a small staff. As a native of the Mid Shore, Richard was so proud of how Attraction embodied the people, places and events of the area. I feel like we have taken the torch and are continuing that legacy.”

In 2008, the magazine launched its first website. In 2010, the magazine published its first October only issue. Laser Letters was hired for ad design, and Jennifer began doing all the page layout of the magazine. APG Media (previously Chesapeake Publishing) continues to print the magazine in Easton today. Slowly the magazine transitioned from black and white, to having a few color ads, to all color, and incorporated a stapled binding.

Richard’s daughter, Allison Rogers, started working with the business in 2013, first in the area of advertising sales. In 2016, Allison decided she wanted to take online graphic design classes so that she could begin designing ads for Attraction’s clients. Allison reflected, “I made a lot of connections, met a lot of people, and really got to know what our local businesses stood for by doing ad sales. That, combined with my love of creativity, made transitioning to the role of graphic designer a natural fit.”

In 2017, Emily Sparks began handling ad sales for Attraction. In this same year, the magazine got a glossy cover by what Richard called a “happy accident” – a wonderful upgrade and Richard’s lasting mark on the publication. It was this same year that the magazine started using a perfect-glued binding for all of its issues. As Richard’s health began to decline, he encouraged Allison to stay involved with the magazine. Richard worked as Publisher until his death in May 2017 when his wife, Harriett, took over ownership for the remainder of the year.

On January 1, 2018, Allison Rogers became the owner of Attraction magazine preserving many of her father’s and Louise Hawkins’ original ideas and adding some of her own. While the magazine continues to support its advertisers by covering their events, it has added an online Calendar of Events for the Mid Shore, increased its web presence, and continues to connect more with its readers on Facebook and Instagram. Once a month, the Attraction staff, calling themselves the “Lunch Ladies,” enjoys a work meeting at a local restaurant to show support and promote the establishment on social media. An added feature in the magazine, entitled “Good News Travels!,” includes pictures submitted by readers showing them traveling with their Attraction.

Harriett says, “Richard would be so pleased with how Attraction has transitioned digitally and modernized over the last few years in the way we help spread The Good News. We all know he is watching and smiling as Attraction magazine continues to be so successful.”

Today, Attraction continues to cover such topics as nature and conservation, the arts, fishing, boating, museum events, tours, food, gardening and other leisure-time activities and, of course, the renowned Waterfowl Festival. The circulation of the magazine is approximately 10,000 per issue with distribution to hundreds of locations across the Mid Shore in Talbot, Caroline, Dorchester, Queen Anne’s and Kent counties.

Allison stated, “We continue to enjoy our magazine’s involvement in the community, covering the people, organizations and events that make our region special – sharing the ‘good news’ with our readers. We appreciate the loyal support of our advertisers and readership over the last 40 years and are looking forward to what is still to come!”

Written by Amelia Blades Steward, who was hired in 2007 as a freelance writer to contribute to Attraction magazine. She has been a lifelong storyteller and freelance writer in our community for over 20 years, covering the stories of residents on the Mid Shore who contribute to the quality of life here through the arts, the environment, tourism, health care, and social services.