On July 4, the skipjack Nathan of Dorchester will celebrate its silver anniversary. For the past 25 years, the Nathan has taken groups of people out on the Choptank River and Chesapeake Bay teaching visitors of all ages about the ecology of the river and Bay, the oysters and a way of life on the Eastern Shore that is quickly vanishing. The Nathan has also been a floating ambassador for Cambridge, visiting ports of call up and down the Chesapeake Bay. In celebration of this event, Charles Rouse, the marketing director for the Nathan, wrote four articles that highlight key stepping stones in the life of the Nathan. The first dealt with the declining oyster population, and subsequent decline of the skipjacks. Last month’s article talked about Nathan Myers and President Bush’s Thousand Points of Light, both of which were instrumental in building the Nathan. This article talks about the actual building of the skipjack, which became a community undertaking; and the last article speaks of the impact the Nathan has had on the Cambridge community. These four articles give the reader an insight into the “birth of the skipjack,” and a way of life that endured for the past 100 years.

For most Marylanders, June 4, 1992, was just another Saturday at the beginning of summer. But for the people of Cambridge, June 4, 1992, was a day to remember. That was the day the keelson was laid initiating the formal building of the skipjack, Nathan of Dorchester. Reverend Richard Hubbard gave the invocation and blessed the keelson that would become the backbone of the skipjack – the first one to be built in Cambridge along the shores of the Chesapeake Bay in 40 years.

Cambridge had always been the center of the skipjack building industry with more skipjacks built in Cambridge than anywhere else along the Bay. Ever since the colony’s founding in 1634, Cambridge was a hub of activity centered on boat building. The skipjack evolved over a period of time to meet the needs of the watermen who fished the waters of the Bay.

Oysters were first harvested by hand in shallow waters around the Bay. Then pungies, and later bugeyes were built to tong for oysters in deeper waters using labor intensive hand tongs. These two-mast vessels were smaller versions of the Chesapeake schooners. The introduction of the oyster dredge allowed oysters to be harvested much faster and with less strain. When the oyster bars in the deeper waters of the Bay were depleted due to over harvesting, a shallow draft boat was needed to access the rich oyster bars closer to shore. This shallow draft boat with a retractable centerboard, had to have large sails to generate the power necessary to pull the two dredges, one port and one starboard, across the oyster bars. In 1880, the skipjack evolved, born of necessity, and became the first, and only, commercial sailing fleet in the United States.

The keelson was carved from a 143-year-old loblolly pine tree donated by Tom Spicer of the Spicer Brothers Lumber Company. The initial carving was done at Bobby Ruark’s boatyard near the village of Hutson outside Cambridge. The keelson was then transported to the Generation III marina at the head of Cambridge Creek where the skipjack was actually constructed. It arrived with a police escort and a large crowd of people who came to witness this historic event.

From the very first day of construction, it was clear that the building of the Nathan of Dorchester would be a community-supported undertaking. All the lumber was donated by the Spicer Lumber Company and cut from trees in and around Cambridge. The boat builders were all volunteers who gave over 14,000 hours in building the skipjack. Only Bobby Ruark, the master shipwright, was paid to oversee the project. The town’s taxi service drove volunteers to the building site while trucks and trailers donated their time to get supplies to the building site. Even the boatyard provided space for three years to build the skipjack. And it was reported that on Fridays, townspeople brought boxed lunches, cookies and baked pies to the boatyard to feed the team of builders.

Bobby Ruark proclaimed that, for its size, a skipjack was the easiest boat to build. The construction began on June 4, 1992, with the boat upside down. By October 7 that year, the keelson and transom were in place and when the bottom planking was complete, the boat was turned over and set upright so the sides and top planking could be set in place. Thirteen months later, the boat was launched in Cambridge Creek. This was done to swell the wooden planks which would make the bottom and sides water-tight, and it was easier to continue work with the boat in the water. Two more loblolly trees were cut – one for the 61’ mast and one for the 45’ boom. These trees were donated by Marshall Moore. 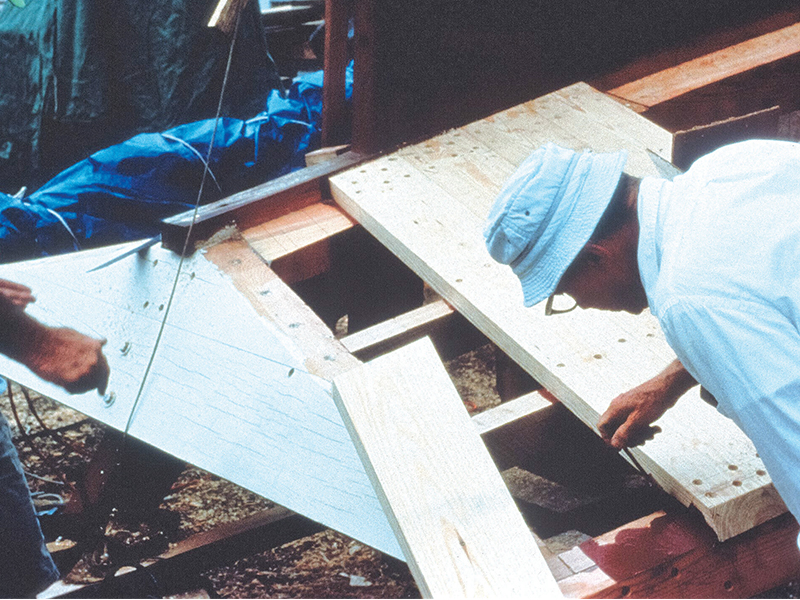 Other donations came from a variety of sources. The diesel engine used to power the boat was donated by the Cummings of Chesapeake, Inc. Mercruiser National Service Department donated the push boat engine and the Telephone Pioneers with Mid-Shore Electric donated the electronic navigation equipment. North Sails in Baltimore donated the labor to make the 1,400 square foot sails.

Not only did people and businesses donate their time and material to the building of the Nathan, but even deteriorating skipjacks found in the marshes and creeks around Cambridge offered up their equipment to the Nathan. The Wilma Lee (1940) gave her steering mechanism and wheel. The Susan May (1901) offered her rollers, the Clarence Crocket (1908) gave her windlass, and the Nellie Byrd (1911) gave her rigging and blocks to the Nathan.

Work on the boat was traditionally done using hand tools. While some power tools were used on larger tasks, hand tools kept the project moving. Bobby Ruark wielded an aze to shape the keelson; an auger was used to bore holes for pegs for the scarf joints and knees. Carefully crafted chisels and mallet were used to carve the planks, so they fit smoothly together. Bench planes and trim planes were used extensively to smooth the curved deck beams and strong backs, and hand saws cut planks evenly for the chine that established the width and rise above the keelson. When the mast was finally set in place, Bobby Ruark asked volunteers to donate a coin to be placed at the bottom of the mast, face up. He collected 75 cents and placed the coins on the keelson as the mast was lowered in place. This maritime tradition is said to have its origins in Ancient Rome. Due to the dangers of early sea travel, the coins were placed under the mast so the crew would be able to cross to the afterlife if the ship were sunk. The coins were supposed to pay Charon, the mythical ferryman, for transporting the dead across the River Styx.

As worked progressed, hundreds of visitors from across the country found their way up Cedar Street to the boatyard. School children, in particular, were invited to board the ‘Nathan-in-progress’ as a living classroom experience in boat-building and oystering. A film crew from Norway even came to film the historic undertaking. All visitors were invited to sign the guest register book, which shows visitors from as far away as New Zealand.

When the work was complete, over 500 people gathered at Generation III boatyard on July 4, 1994 to witness the christening of the Nathan of Dorchester. Gladys Nathan, a relative of Myer Nathan, christened the boat. While originally built to be a dredge boat, she never did dredge commercially. With the dwindling oyster harvests, it quickly became apparent that Nathan’s true mission was going to be in tourism and education. For the past 25 years, the Nathan has been true to her mission, sailing and educating visitors far and wide on the waters of the Choptank River and Chesapeake Bay.