The Byway Quilt Block Trail is a public art project that features more than a dozen quilt block replicas located along the Harriet Tubman Underground Railroad Byway in Caroline County. Each quilt block was hand painted by a community member or organization and portrays a theme related to the Underground Railroad. Follow the trail of historic quilt block patterns to learn about freedom seekers and their quest for freedom. 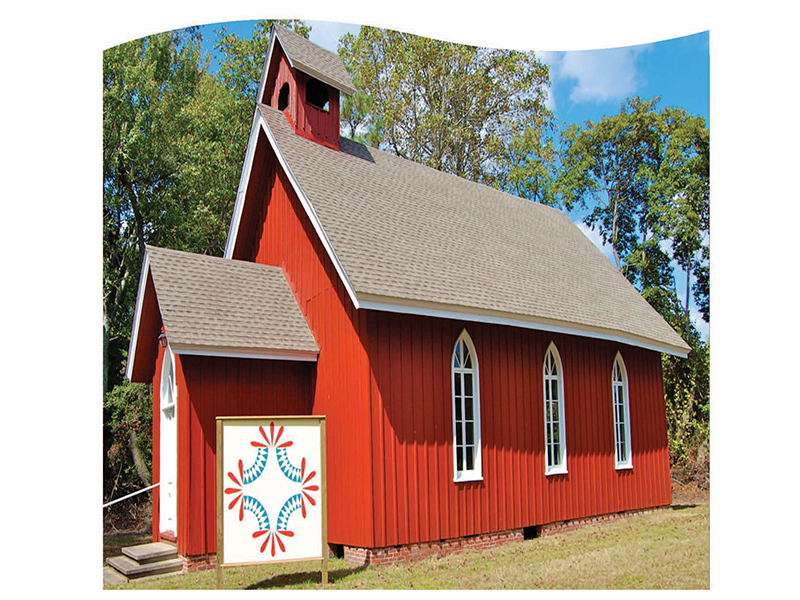 The quilt block replicas are located on or near historic structures along the Harriet Tubman Underground Railroad Byway. The launch of the trail coincided with the centennial celebration of Harriet Tubman several years ago.

The Byway Quilt Block Trail is a collaborative public art project supported by the Caroline County Council of Arts, the Caroline County Office of Tourism, and the Maryland State Arts Council. The trail packs a one-two historic punch in that one learns about the history of significant structures in the county as well as traditional quilt blocks at the time when Harriet Tubman’s Underground Railroad was active.

For example, the Garden Maze quilt block, painted by Fiber Arts Center of the Eastern Shore (FACES) volunteers, is located on the side of The Foundry building, which was built in 1850. The Garden Maze quilt block is meant to represent the long and hazardous journey along the Underground Railroad. Freedom seekers could lose their way spiritually and physically. Because travel was often done at night under the cover of darkness; it was easy to get off track.

The Hardee House, one of the oldest homes in the Denton Arts & Entertainment District, houses FACES, and features the Cotton Boll quilt block on the side of the building. The Cotton Boll represents the large cotton plantations that demanded a labor force of slaves, of which many tried to escape via the Underground Railroad. This quilt block was painted by the Caroline County Council of Arts’ board members.

The Log Cabin quilt block is a well-known one among quilters. The James H. Webb Cabin was built by James Webb, a free African-American farmer, in about 1852. He lived in this cabin with his enslaved wife and their four children. It is located at 23459 Grove Road in Preston and proudly features the Log Cabin Quilt Block on the Byway Quilt Trail.

Currently there are 14 quilt blocks on the trail. One was destroyed in a lightning strike while another location at the 4-H Park is currently in the works. Anyone interested in driving The Byway Quilt Trail should download a brochure from the FACES website at fiberartscenter.com. There, one will find the map with corresponding locations and quilt blocks. Also, there is a nice explanation of each quilt block with related artwork. And, lastly, there is a link to purchase the Harriet Tubman Byway Quilt Pattern with Center Medallion. The kit includes the center medallion, featuring an image of Harriet Tubman, as well as 16 quilt block patterns that tell the story of the Underground Railroad. These symbols were carefully selected to represent the era and the escape routes used to bring people to safety.

Several more Public Art Projects like the quilt trail are in the works right now in Caroline County. In May, during Denton Spring Fling, a mural by Nicholas Tindall was unveiled in the Denton Community Demonstration Garden. In June, a mosaic by Parran Collery will be unveiled at the alley side exterior wall of 14 South Third Street in Denton. This fall, a garden sculpture by Dawn Malosh will be unveiled in the Artsway Pathways behind the Fiber Arts Center building at 7 North Fourth Street in Denton. By May 2020, there should be 11 public art projects on view in the county. For more information, visit carolinearts.org.