On the corner of Routes 662 and 404, history and food collide, and it is the perfect combination for an article. Straddling the border between Talbot and Queen Anne’s counties lies a modest wooden structure with a long story to tell. Accented by our state flower, the Black-Eyed Susan, the Old Wye Mill property might be overlooked to passersby if not for the simple wooden sign out front. However, behind its Dutch door, a living history lesson is open to the public as the millstones still grind away, as they have been for over 300 years.

This quiet crossroads in Wye Mills wasn’t always so still. Route 662, or “the road to Philadelphia,” was once heavily traveled. An epicenter of commerce, over the years, the mill was surrounded by multiple stores and support structures that housed businesses pertinent to the times. Blacksmiths and Coopersmiths (barrel makers), stalls for horses, and a sawmill dotted this rustic landscape hundreds of years ago. It’s hard to imagine this place, now so quiet, having had so much hustle and bustle. It was not just a business epicenter, but a social one, too, as communities centered around mills. 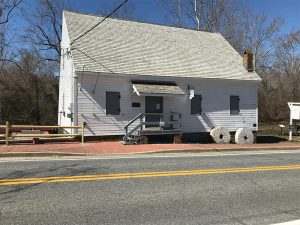 Built in 1682, it is a youthful 337 years old and, while weathered and worn, its essence projects upon the observer a place well loved by many millers and stewards of the property who came before. The dusty, flour strewn interior boasts worn floorboards buckled in places by time and water. An 1840 carving on one of the interior support beams quietly pronounces a time of major renovation, a mere 179 years ago.

The mill is most famously known for its role in providing flour to George Washington’s Continental Army in the American Revolutionary War. Flour was put on “flats” (flat bottomed boats) at the mill and taken to Emerson Landing, which is now “Wye Landing,” where it was then distributed to larger ships that sailed to different ports depending upon where Washington was fighting at the time. Many mills provided for Washington’s Army at this time, but not all. Some mills were built on land grants from the King of England and were not allowed to provide grain lest they lose their land grant. So, the burden fell upon those mills not settled on the King’s grants. The Wye Mill was asked to provide grains to the army in exchange for payment in 1778 and officially sold to the Army in 1779.

The last miller to purchase the mill was Winthrop Blakeslee in 1918. He worked the mill until the Bay Bridge opened in the 1950s, which led to the mill’s commercial decline. Trade was more prolific with the bridge open and demand went down for locally milled grain. The mill, land and pond were sold to the state of Maryland in 1953. Before the opening of the Bay Bridge, the miller sold to the Eastern Shore, Delaware and Philadelphia, but could no longer compete with larger mills once the bridge opened.

Recognizing the historical importance of the mill, the state of Maryland transferred the mill and 3/4 of an acre of land to which it occupies to Preservation Maryland. In 1985, it was placed on the register of Historic Places. In 1991, a group of local concerned citizens founded the “Friends of the Wye Mill” and, by 1996, Preservation Maryland gave the Mill and 3/4 of an acre to “The Friends of the Wye Mill,” to operate. They retain ownership today. Through its transformation, the mill has always remained in operation, making it the oldest continually operating water powered mill in the United States. It is also one of the oldest commercial buildings still in use in Maryland.

Today, the Old Wye Mill offers a variety of flour, both local and organic. Interestingly enough, an 1850 Eastern Shore Census indicated that the grain crops being grown in the area at that time included wheat, rye, Indian corn, oats, barley, and buckwheat. These are the same grains that are ground today, except oats. The organic corn comes from William Mason of Mason Family Farms in Queen Anne. It is ground into cornmeal and grits. Local corn and wheat are also provided by Nagel Farm Services in Wye Mills. A variety of organic grains, including wheat, rye, buckwheat and barley, come from Lakeview Organic Grain in Penn Yan, New York. Other supplies available for purchase at the mill include Maryland Maple Syrup from Corriganville, Maryland, jams and local wildflower and buckwheat honey from Greensboro Apiaries. These products are all great accompaniments to biscuits, breads and pancakes.

The Old Wye Mill has benefitted by the support of local citizens and many organizations. Several Boy Scout Eagle projects grace the property, including a replica of a corn crib. The latest Scout Eagle projects include replacing the fencing, new brick sidewalks, and the construction of an observation deck so that patrons may watch the wheel in action from behind the mill. Through grants, membership dues, donations, sales of grain and gift shop items it is a self-sustaining piece of history, not to be overlooked.

Water travels under Route 662 through a concrete flume setting the wheel in motion every first and third Saturday of the month. These are the days to catch the wheel in action. During the week, the Old Wye Mill is open Monday through Friday from 10 a.m. to 4 p.m. On non-grinding weekends the mill is open if a volunteer is available. It’s advisable to call ahead. Tours are free but “The Friends of the Wye Mill” humbly suggest a $2 donation to help sustain efforts to educate the public about the mill’s rich history.

History of the sources of our food is often lost in translation in the mainstream of modern times. We may wonder where our vegetables and fruits come from, but how often do we ask where the grain comes from that is in our bread or cakes? Where was that grain grown and who ground it to make the bread for my sandwich? A day trip to the Old Wye Mill can provide a grain of perspective on the humble beginning of bread. Thanks to “The Friends of the Wye Mill,” the wheel continues to turn…grits anyone?

Thanks goes to John Nizer, President of “The Friends of the Wye Mill,” and Rhonda Corder, Mill Manager, who were both interviewed for this article. Recipes are supplied by the Old Wye Mill. For more information, visit www.oldwyemill.org or call 410-827-3850.

A note from the author: I have baked both recipes below as written. I enjoyed these old-fashioned cakes and recommend everyone take a trip in time and try them.

Preheat oven to 350 degrees. Grease and flour a 9-inch round cake pan. Sift together the cornmeal, flour, salt and baking powder; set aside. In a medium bowl, cream together the butter and sugar. Beat in the eggs one at a time, then stir in the vanilla. Add the dry ingredients alternately with the yogurt, stirring after each addition. Finally, fold in the strawberries. Pour the batter into the prepared pan. Bake for 45 to 50 minutes until a toothpick inserted comes out clean. Cool the cake in the pan on a wire rack for 30 minutes then invert onto a serving plate. Serve with ice cream or whipped cream.

Preheat oven to 350 degrees. Whisk together the flours, cornstarch, sugar, baking soda, salt cinnamon, ginger, allspice, dry mustard, and pepper in a large mixing bowl. Add the molasses, oil, vinegar, vanilla and cold water. Mix the batter together until just blended. Pour the batter into an ungreased 9×13 inch baking pan. Bake for 30 to 40 minutes until a toothpick inserted comes out clean. Cool in the pan for 10 minutes before removing to cool completely on a wire rack. Dust with powdered sugar or top with gingerbread lemon topping.