In many Eastern Shore hamlets, country stores have been the epicenter of rumor and truth and everything in-between about one’s neighbors, local lore and public warnings. You are known by the company you keep, and the nightshades family of plants is a great example of this social convention. It is hard to overcome speculation and demystify the rumors if all your cousins are living on the dark side.

Humans have been whispering warnings about the nightshades family for hundreds of years. It is only in more recent times that we have come to embrace the nutritional benefits of many of the nightshade vegetables. To begin to unravel the truth about these misunderstood vegetables, we must first understand the nightshade family.

The origin of the name nightshade itself is somewhat of a mystery. One source states that the plants were so named because they were thought to be evil and loving of the night. Another states that the name is an allusion to the poisonous or narcotic properties of the berries.” (Heiser)

With more than 2,000 species, the Solanaceae family is found all over the world. The nightshade family includes many delicious garden favorites like tomatoes, potatoes, peppers and eggplants, but it also includes tobacco, mandrake, deadly nightshade (belladonna), henbane, and the dreaded Jimsonweed. The later specimens of this list being subjects of magic, medicine, mayhem, hallucinations and eternal sleep, have tainted the reputation of their nutritious cousins that frequent many dinner tables.

Many nightshades contain an alkaloid called solanine, which is toxic in high concentrations. However, many of the nightshades vegetables we enjoy contain only a negligible amount of this alkaloid and, thus, their nutritional benefits may far outweigh the solanine.

Due to their associations with the wrong crowd, the nightshades that we commonly eat today, that is: tomatoes, potatoes, peppers, and eggplants were not readily accepted as food in the not so distant past. To understand why our dinner fellows were slow to make it to our tables, I will share a brief history of each.

The oldest known records of peppers come from Mexico. From seeds found on the floors of caves that served as human dwellings…we know that the Indians were eating peppers perhaps as early as 7000BC…The New World peppers’ claim to fame lies in their pungency. In fact, some varieties of Capsicum are so hot as to have produced burns requiring medical attention, and reputedly peppers have been used for torture in the both the Old and New Worlds. According to sixteenth century chroniclers, smoke from burning peppers was used as a gas by South American Indians in warfare with the Spanish. (Heiser) Today, pepper spray is used to deter assailants. On the cooler side, bell peppers are very high in vitamin C, they also contain Vitamins A and E, Vitamin KI, folate and potassium. They also contain many healthy antioxidants.

It is believed that wild potatoes originated in the high Andes of South America. The first Spaniards in the region – the band led by Francisco Pizarro, who landed in 1532 – noticed Indians eating these strange, round objects and emulated them, often reluctantly. News of the new food spread rapidly. Within three decades, Spanish farmers as far away as the Canary Islands were exporting potatoes to France and the Netherlands (which were then part of the Spanish empire). The first scientific description of the potato appeared in 1596… Continental farmers regarded this alien food with fascinated suspicion; some believed it an aphrodisiac, others a cause of fever or leprosy. (Mann, Smithsonian) Despite this suspicion, potatoes made their way across the globe staving off famines. Unfortunately, they were also susceptible to blights and potatoes, or lack thereof, caused approximately 1.5 million deaths in the great Irish potato famine, between 1846 and 1851.

I first heard the myth about green potatoes making you sick in my elementary school cafeteria, when one friend dared another to eat a green potato chip. Turns out, there is actually some truth to this myth.

“The potato acknowledges its membership in the nightshade family in that it may also contain small amounts of the alkaloid solanine. This may be present in toxic amounts in potato tubers near the surface of the ground that have been exposed to light and have turned green. Such potatoes, if eaten raw, are particularly dangerous but cooking, fortunately, breaks down and lowers the amount of the solanine.” (Heiser) Potatoes are a good source of potassium, folate, and vitamins C and B6.

Aside from references in ancient Indian texts, the earliest European eggplants of record are depicted in Byzantine mosaics from about the late 400s AD. The name eggplant in English was derived from one such ornamental introduced to England in the 1500s. It sported little white fruits shaped like chicken eggs. The fruits were fairly bitter, so they never made it into traditional English cookery. (Weaver, Heirloom Gardener) “The Italian name for eggplant is melazana, which translates as “Mad Apple.” …This interpretation would not be inappropriate for at one time the eating of this fruit was thought to cause insanity.” (Heiser) This nickname would not help its popularity.

The garden tomato is near and dear to my heart. One of my favorite summer meals is a tomato sandwich. But the tomato wasn’t always so loved, like its other nightshades cousins it had a bad rapport from the start. In the late 1700s, a large percentage of Europeans feared the tomato. A nickname for the fruit was the “poison apple” because it was thought that aristocrats got sick and died after eating them, but the truth of the matter was that wealthy Europeans used pewter plates, which were high in lead content. Because tomatoes are so high in acidity, when placed on this particular tableware, the fruit would leach lead from the plate, resulting in many deaths from lead poisoning. No one made this connection between plate and poison at the time; the tomato was picked as the culprit. (Smith, Smithsonian) Tomatoes are a good source of vitamin C, potassium, vitamin K, and folate. Tomatoes also contain antioxidants such as lycopene, and betacarotene.

Not just exclusive to nightshades, solanine is present in other edibles as well such as: apples, blueberries, cherries, beets, okra, artichokes and huckleberries. Which begs me to ask why the nightshade vegetables have been singled out? Should we fear the nightshade vegetables? I’m thinking not so much, but we should be cautious as there is anecdotal evidence that some people do not tolerate them very well, and nightshade allergies are rare but real. But guilt by association? I vote no as it appears from my research that for most of us nightshade vegetables are a viable source of minerals, vitamins and antioxidants, which we all could use a little more of.

As in human life, in the nightshade family we find death, mystery, sustenance and beauty all in one family. The pretty petunia and the beauty of the butterfly flower belong in the nightshade family as well. I prefer to think of the nightshades as a diverse and colorful family subject to many stories from the screaming mandrakes in Harry Potter to the deadly allure of the shiny black toxic berries of the belladonna, to the colorful butterfly flower adored by its namesake. Mysterious and misunderstood, we as humans have been cautiously drawn to them for thousands of years. As September grows cooler, I, too, will be enticed by my nightshades in the garden – to my sea of shiny red tomatoes, my colorful peppers and my mystical eggplants – to pick and enjoy.

salt and pepper to taste

Pre-heat oven to 350 degrees. In a cast iron skillet, add about 2-3 TBS of olive oil and the minced garlic. Cook on medium until garlic begins to brown slightly. Add the cubed eggplant and sweet corn. Cook until light brown, adding more olive oil if needed. Pour the tomato sauce in the bottom of a two-quart baking dish. Sprinkle with the fresh basil. Layer the sweet corn and eggplant on top. Sprinkle with salt and pepper and some of the cheese. In the same cast iron skillet add more olive oil and saute the mushrooms, shallots and peppers until light brown. Layer them on top of the eggplant and sweet corn. Sprinkle with salt and pepper and some of the cheese. For the final layer, arrange the zucchini, yellow squash, and Roma tomatoes on top and sprinkle with salt and pepper and the reminder of the cheese. Bake in a 350-degree oven for about 45 to 50 minutes. Serves 4-6 people. 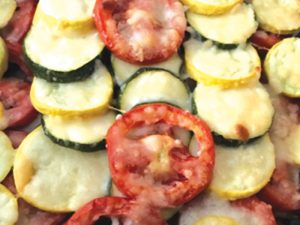 “What to Know About Nightshade Allergies,” by Charlotte Lillis Medical News Today May 2018