Follow along each month in Attraction magazine as Sprout takes readers on tours of Mid-Shore farms. They will share stories from the road as they visit and learn about area farms. Sprout provides individually portioned ready-to-eat meals using fresh, local and organic ingredients, delivered directly to customers as well as on sale in their Farm-to-Fork Café.

Sprout, a company that focuses primarily on the use of local and organic ingredients when it comes to their food and snack products, prioritizes the same qualities in their beverages. While several of their drinks, including their unique “Beet Lemonade” and “Cherry Limeade,” in house, Sprout receives their coffee beverages and kombucha tea from local companies, Night Kitchen Coffee and Fed Brew. Since the two businesses have such unique and interesting backgrounds, Sprout wanted to showcase the behind-the-scenes of how these one-of-a-kind beverages are made before they can be purchased in-store and online.

The history of coffee, originally cultivated in Ethiopia, and human utilization of it, date all the way back to the 15th century. There is no denying that, for many, drinking it is an integral aspect of the day. People love coffee and drink it in various forms, however, there is a long and intricate process that occurs after the coffee fruit is harvested and before its ground to produce your favorite caffeinated beverage. 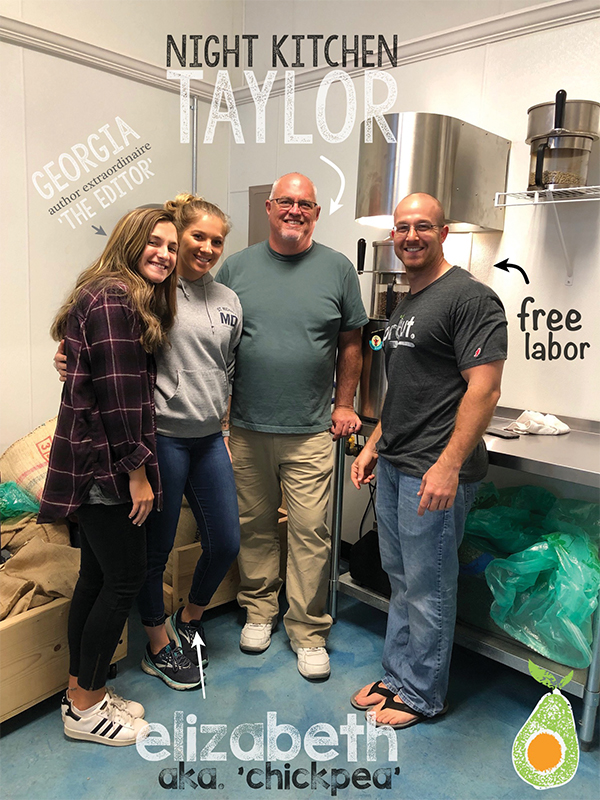 Taylor Hale at Night Kitchen Coffee knows all about this process and has created a business based around it. With his wife, Leslie, he opened a company from what started out as a hobby and it has really taken off. Through roasting coffee beans grown on small farms and in micro-lots, the pair have turned their passion into profit. At Sprout, Night Kitchen Coffee is sold by the bag, cup, and bottle. It can also be found in products like their signature “Buzz Bites.” To find out more about who they are and what they do, members of Sprout’s staff took a trip to Denton where the magic happens.

Night Kitchen Coffee is located in downtown Denton and is sold in several locations across the state. So, how exactly did this operation begin? It started out as a hobby. Taylor first attempted roasting coffee in his home kitchen back in 2009. He tells us that he first made a really good-tasting cup of coffee. His second batch didn’t turn out so well.

“The fact that two identical varietals of coffee grown on the same mountain can be so radically different just amazed me,” Taylor said. Curious as to what caused variation in flavor from one cup to another, he did some research about the reasoning behind these differences. Also, he continued to experiment with the process, roasting coffee in his own kitchen at night. Leslie wasn’t so fond of the smell, at least in their home, so they decided to move this affair into a space in downtown Cambridge in 2013. They were then sharing a space with her consignment clothing store and an art gallery that showcased local artists from the Dorchester County area. Things began to take shape and the pair decided on a name that paid homage to their humble beginnings: “Night Kitchen Coffee.” About three and a half years later they moved into the “more production friendly” space that they currently occupy today. 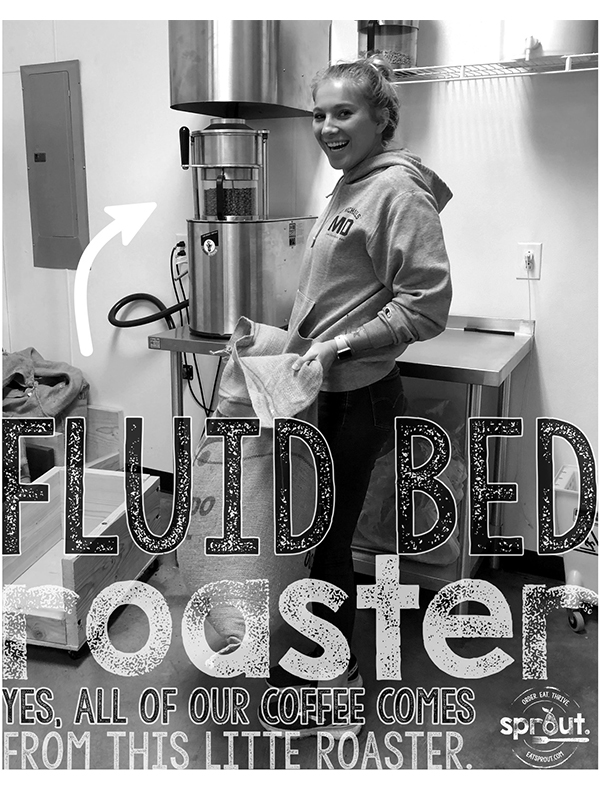 Through years of research and hands-on experience, Taylor has developed an extensive knowledge about coffee, including each step from seed to cup. He informs us that it takes three years for a coffee plant to mature before harvest. Once the plant matures, it can produce eight pounds of coffee per year. Taylor explains that coffee seeds come from fruit grown on these plants, referred to as “coffee cherries.” The couple does not grow these plants themselves, however. Something unique about Night Kitchen is that they buy from micro-lots where small numbers of coffee plants are grown at a time and given a large amount of attention and care until they produce coffee fruit. Through doing so they are able to ensure that their coffee is high-quality and that the farmers they build relationships with also benefit from the process. Taylor and Leslie greatly appreciate the farmers that they work with stating that “the most important part of a cup of coffee is the work that the farmer puts in to grow it.”

The step in this process that Taylor was most excited to explain was the area in which he excels: roasting. At Night Kitchen, they use a fluid bed roaster, which is similar to a hot air popcorn popper. This type of roaster gives it a bright and unique flavor, as it’s one of the elements which affect the coffee’s taste. Many things, however, have an impact on the way that the final product turns out. Other factors can include things like ripeness of the beans, temperature at which they’re roasted, material that the roaster is made out of, and the time the beans are given to rest after roasting.

Taylor claims that roasting at a temperature above 205 degrees will allow bitterness to come through. He also reveals that coffee should rest for 24 hours after it’s roasted, as “letting it rest gives it a brighter flavor profile.” With curiosity, Sprout asked Taylor to address a popular myth about caffeine content. Despite what many believe, Taylor reveals that the darker the roast, the less caffeine the coffee contains. This is because more caffeine is burned off in the roasting process. It is clear that when it comes to coffee, what’s in it, and how it will taste, Taylor knows what he’s talking about. Surprisingly, however, this is not his only focus. He manages his coffee production around his “increasingly busy day job” as lead engineer for an instrument program at NASA’s Goddard Space Flight Center.

Along with their coffee, Night Kitchen also creates a variety of different spice blends. They create small batches of blends like five-spice, Za’atar, and Vindaloo Curry, to name a few. The story behind their spice blends is that Taylor has “always been interested in building complexed and nuanced flavors for food,” so, when a pork farmer challenged him to come up with a unique sausage blend, he confidently accepted. This led to Taylor and his wife constantly producing new spice blends and selling them in their retail space. The two are always trying new techniques when it comes to their spices and coffee.

When asked about the business’ future, Taylor says that they “are on a path to expand.” He does, however, admit that “[he] [doesn’t] see a point where [he] won’t be doing all the roasting.” He and Leslie, the company’s only two employees as of now, are slowly growing their retail business and adding in additional products and services.

Kombucha, a fermented tea beverage with a natural effervescence, has been around for more than 6,000 years! While it’s considered an “ancient drink” there are still several questions up in the air regarding what it is and how it’s made. To help answer some of these inquiries, Sprout visited Stan and Gale Galbraith in Federalsburg where their business, Fed Brew, is located. Not only did they explain how they make their kombucha, but also revealed the unique story of how they got into the industry! 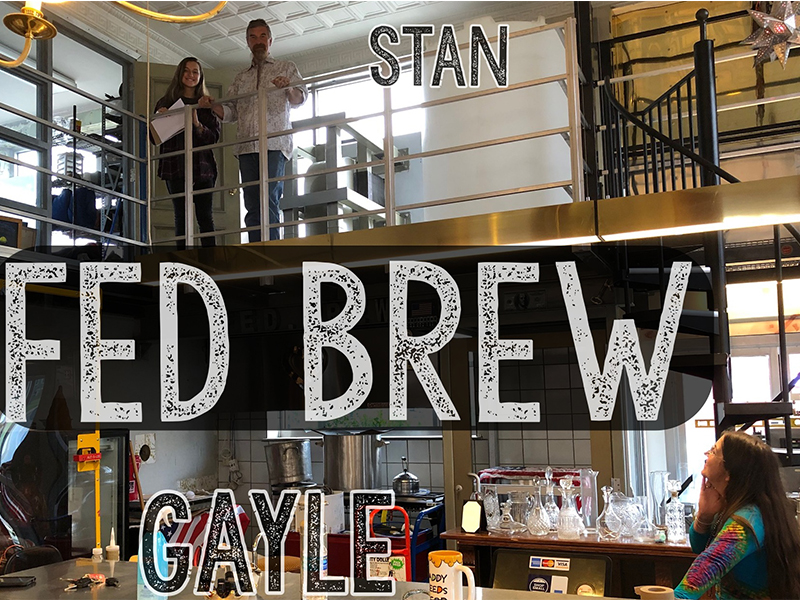 It all started when the couple learned that an old bank in Federalsburg had closed years ago and was now up for sale. Intrigued by the building’s history and location, they decided to put in an offer less than the asking price out of curiosity. Eventually, the couple received a call letting them know that their offer was accepted, and this historic bank, built in 1918, was theirs if they wanted it. Unsure of what exactly they would do with the space, the Galbraiths went ahead and confirmed that they’d take it!

Gale had a background in the medical field so the two thought about converting the bank into a wellness center. Because both Stan and Gale were originally craft brewers, they even tossed around the idea of opening a pub. At this time, neither of them had ever even tasted kombucha and didn’t do so until 2013 in Philadelphia. Once they tried it, they really liked the taste and began to research the industry. After producing a small batch of kombucha on their own, they allowed their friends to try it, resulting in these friends encouraging the couple to start selling the product. Noticing that the market for kombucha was on the rise, Gale contacted family of hers in California to see if the beverage was as popular outside of Maryland. They confirmed that they had, in fact, heard of and tasted kombucha. In 2015, they dove into the kombucha industry and, since then, the business has taken off. Fed Brew kombucha is sold to about a dozen places across Maryland, including Sprout which keeps multiple flavors on tap.

The thing about kombucha that makes it such a unique beverage is the process behind its production. Kombucha begins as a sweet tea – Fed Brew uses a premium organic tea made with pure cane sugar. They then brew the tea with tisanes herbal blends. Next, it’s taken out and sugar is added. After this, a strong starter with a low pH is put in and within days the tea begins to transform and produce E vitamins along with lots of vitamin C. Once this occurs, the SCOBY, Symbiotic Culture of Bacteria or Yeast, referred to by the Galbraiths as “the mother” is put in. This is the reason that kombucha is considered good for you: the bacteria from the SCOBY promotes gut health. The couple explains that fermentation of kombucha can take roughly 40 days and that they sometimes do a secondary fermentation. 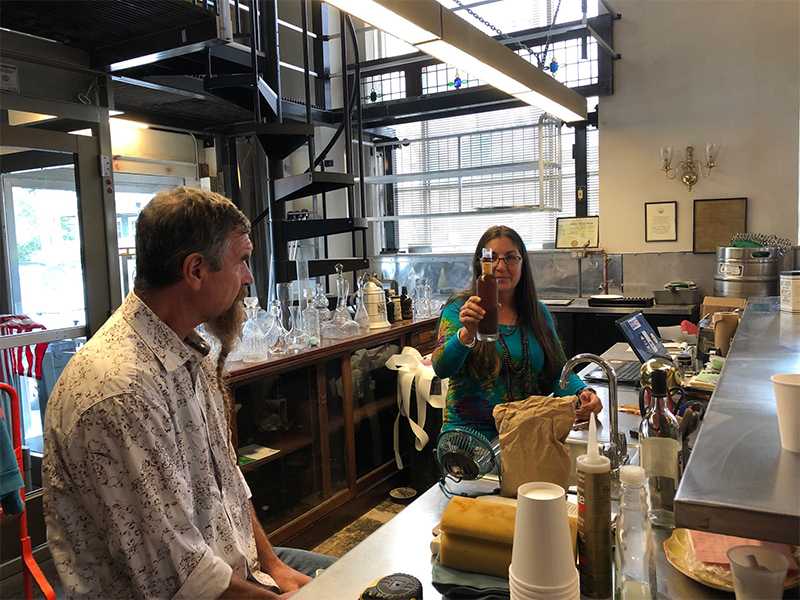 Kombucha is a product highly praised for its extensive list of health benefits. The couple revealed that “there is scientific evidence that consuming local fermented foods with bioregional specific bacteria, like the probiotics present in [their] kombucha, can significantly impact your immune system” in a positive way. It’s a natural way to balance your gut microbiome. Gale believes that “it’s unique to [each person’s] body” and encourages those that buy their kombucha to “drink it when [they] feel like [they] need it.” Some additional benefits of the carbonated drink are its ability to increase one’s energy, decreases risk of certain diseases, and help to maintain good cholesterol.

Fed Brew is a small family business and currently Stan and Gale’s team consists of themselves and their children. They’ve made over 50 flavors so far. “We are renowned for having a ridiculous number of “one-offs” or small batch brews,” jokes the couple. The Galbraiths note that they’d like to open more brewing facilities to offer authentic local kombucha to a larger number of people. They also reveal that additional fermented foods and beverages are part of their future plans. For now, however, Stan and Gale are having fun and doing what they love, and their customers are excited to see what new and interesting flavors they come up with next.

The author, Georgia Foster, age 17, lives on Maryland’s Eastern Shore with her mother and two sisters. She attends Easton High School and is passionate about writing, specifically feature writing and investigative journalism.

Sprout is excited to announce that they will be opening a café and bakery in downtown St. Michaels this month. Here, guests will be able to come in and order food, which they can then take with them on-the-go or sit down to enjoy a nice meal. Along with a full menu of breakfast, lunch, dinner, baked goods and snacks, Sprout Café will include a full coffee bar featuring Night Kitchen Coffee with pour overs, cold brew, Nitro, French press, and more. Also, this new location will have seasonal flavors of Fed Brew kombucha on tap, along with growlers for purchase and fill-up. Stop by and check it out for yourself. As Sprout grows, they’re making it easier than ever for customers to Order. Eat. Thrive. 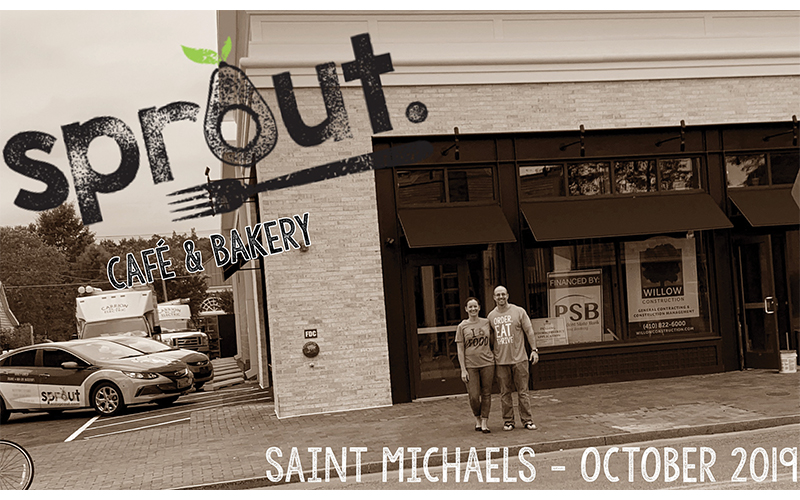