As of January 1, 2020, the Kent County Arts Council became known as the Kent Cultural Alliance, with a simple vision of Celebrating Creativity, Connecting Communities, and Sharing Conversation. More than a year in the making, the Board of Directors, led by President Clark Bjorke, and Director John Schratwieser are thrilled to release the new name and logo, designed by Kent County native Kate Livie, of Alosa Communications, as they begin the next chapter in the now 45-year old organization.

According to John, the organization was one of the first county arts councils to be established in 1975 after the Maryland State Arts Council was formed. The council, like many arts councils across the state, has focused on regranting state arts funding and supporting the artistic and cultural health of the county. It was founded by Vincent Raimond and the first director was his wife Leslie Raimond, who served from 1989 to 2017. The couple actively supported the arts in Kent County.

John came to the Kent County Arts Council in 2017 to be co-director with Leslie Raimond. He took over as director in 2018 upon her retirement. Previously, he was Executive Director of Maryland Citizens for the Arts, Inc. in Baltimore, and had served as Executive Director of the Prince Theatre Foundation, Inc. (now called Garfield Center for the Arts) in Chestertown for five years.

The organization has a deep focus in community programming around social and civic conversations since the local arts needs are being provided by the larger entities – the Garfield Center for the Arts, River Arts, and the Mainstay.

According to John, the Arts Council’s history included reaching into the African American, aging and disabled communities in Kent County and providing programming in the schools. In his new role, he is working to continue and strengthen these relationships by hosting professional development days with art departments in the Kent County Public Schools, as well as bringing in visiting socially engaged artists to the community. These artists are providing exhibitions and performances around such societal issues as PTSD for veterans, the opioid epidemic, and population migration.

He adds, “We are using the art form as a tool for learning and social and civic engagement.”

To support its new direction, the organization purchased the historic Mansfield/Eliasson house located at 101 Spring Avenue in Chestertown and began a campaign to raise funds to fully renovate the space as a center for arts and culture. To date, the Kent Cultural Alliance has raised more than $850,000 toward its $1.2 million goal. They are very excited to enter into the final public phase of the campaign that will allow multiple opportunities for support at all levels of giving ability. The center will be called the Vincent and Leslie Prince Raimond Center for Arts & Culture, honoring the couple’s half-century commitment to enriching the quality of life in Kent County.

John calls the purchase serendipity as he had personally tried to purchase the building in 2006 because of the possibilities it presented to the community but was unsuccessful in doing so.

The second floor of the Vincent and Leslie Prince Raimond Center for Arts & Culture will be used for a Visiting Artist Residency Program. This program will enable individual artists to work and exhibit three times a year for periods of three months each. Established artists from the national and international scene, who want to expand their bodies of work, will be working around social or civic topics and will engage community organizations and the schools in their work. The first floor will have four private studios for the Artists in Residence, as well as an office, conference room, and multipurpose performing arts room/gallery.

“Realizing that historically the bulk of public funding goes to art organizations, we wanted to support individual artists. Kent County is a community of artists and we have not dedicated enough time and space to them,” John adds.

“I believe that our name change goes with this new purpose. Organizations across the region are incorporating the word ‘alliance’ into their names, like the Greater Baltimore Cultural Alliance, as they begin to tackle the societal role of the arts in creating stronger communities. So much of what I do now is because of the extraordinary things happening at the state level in this direction.”

The building renovation project is being led by Kent County’s “master builder” Bob Ingersoll, in partnership with Barton Ross Architects of Chestertown and Jay Silcox Engineering of Rock Hall. Major funding has been received from Maryland Heritage Area Stories of the Chesapeake, the Maryland Department of Housing and Community Development and the Shared Earth Foundation with additional support from many generous community members.

The first phase of renovation, a new foundation, has been completed by Paul Roberts Construction of Worton, and bids are now going out for a contractor to execute the final phase, the internal and external build, as represented in artistic renderings done by Barton Ross and Jay Silcox.

Kent Cultural Alliance’s new logo was a collaborative effort between Kate Livie and several members of the KCA’s Board of Directors and it incorporates a popular and historic quilt pattern known as “Flying Geese.”

“What better symbol, to represent an organization whose mission it is to bring people together, through art, culture, and collective history, than a quilt,” says John. “Quilts are instantly recognizable, they reflect cross-generational and cross-cultural qualities, and they literally and figuratively wrap us together as one people. Selecting the ‘Flying Geese’ pattern was a natural choice for anyone who knows and loves this county we call home.” 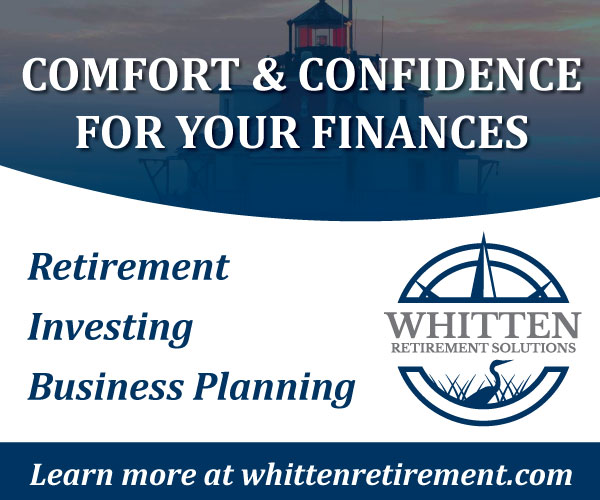