Martha, the Passenger Pigeon, passed away on September 1, 1914 in the Cincinnati Zoo. She was the last of her kind. It almost seems an impossibility given passenger pigeons once filled the skies in such numbers as to block out the sun. In 1860, an estimated 3.7 billion pigeons flew across Fort Mississauga, Ontario. So vast was their presence that it took more than 14 hours for the 300-mile-long flock to pass, as Joel Greenberg describes in his book, A Feathered River Across the Sky.

No matter the depth and breadth of this species, they were no match for the palatable pleasures of the time. According to the Chicago Tribune, for centuries, pigeon was a plentiful food source for native peoples and settlers. By the 18th century it was a dietary mainstay. Salted, roasted, dried, smoked, baked into pies and boiled in soups, passenger pigeon was enjoyed by rich and poor. However, our demand was far too great for the passenger pigeon to survive on this planet.

While I do not believe cows will become extinct, our planet does have a beef consumption problem. If our demand for beef continues to rise, its trajectory will become unobtainable without a collapse of natural resources, the purest definition of unsustainable. The word sustainability is thrown around quite a bit these days and I wonder if anyone really stops to think about its definition, which is: the ability to be maintained at a certain rate or level, or the avoidance of the depletion of natural resources to maintain an ecological balance. By this definition alone, the beef industry has already exceeded its sustainability. 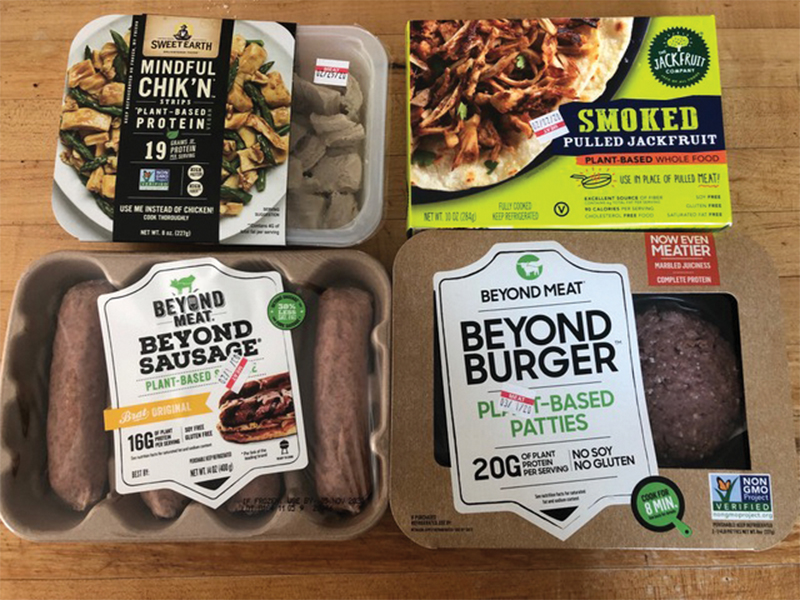 If we look at a cow as not just beef, but all that is involved to bring the beef to the dinner table, then the resources needed to produce beef, land, water, energy and grain, must be examined. When looking at feed to food conversion efficiency, beef is by far the least efficient protein compared to other livestock such as pork and chicken. And all livestock is less efficient than fish protein, with cricket protein being the most efficient of all. According to The Week, a recent University of Michigan study found that a plant-based burger generates 90% less greenhouse gas, requires 46% less energy and has 99% less impact on water scarcity than a quarter pound of U.S. beef.

Even if it turned out that beef was part of a healthy diet, it’s not part of a healthy planet, and it’s time to shift our concerns from our arteries to the heartbeat of our environment. Here’s the skinny: the rising demand for beef is accelerating deforestation in the Amazon, and that’s not a good thing. With planting trees being one of the best ways to recapture carbon emissions, cutting them down for cow pasture is antithetical to science-based solutions for global warming.

The World Wildlife Federation reports, “Extensive cattle ranching is the number one culprit of deforestation in virtually every Amazon country, and it accounts for 80% of current deforestation. Alone, the deforestation caused by cattle ranching is responsible for the release of 340 million tons of carbon to the atmosphere every year, equivalent to 3.4% of current global emissions. Beyond forest conversion, cattle pastures increase the risk of fire and are a significant degrader of riparian and aquatic ecosystems, causing soil erosion, river siltation and contamination with organic matter. Trends indicate that livestock production is expanding in the Amazon.”

With health proponents touting the virtues of plant-based diets, and reports on how destructive the cattle industry is to the environment, it’s hard to justify eating beef. Except for the fact that so many of us really like the taste of beef, including this author. Wanting to ease my mind about how much I enjoyed my last burger, I began to research alternatives. Luckily, meat alternatives, while in their infancy as an emerging technology, are gaining traction.

If you watch television, you have most likely heard about plant-based meats. When a fast food giant like Burger King adds the Impossible Whopper to the menu and  Kentucky Fried Chicken follows behind with Beyond Fried Chicken and Dunkin’ enters the ring with a Beyond Sausage breakfast sandwich, this meatless experiment that began as a whisper has become louder with a rise in popularity and curiosity. The volume of the conversation increases when Arby’s yells back, “We have the Meats!” In case you are wondering: the nutrient profiles of a regular Whopper versus an Impossible Whopper are similar, and you don’t have to visit a fast food restaurant to try a plant-based meat alternative. I went to my local grocery store and found a variety of plant based alternative meats in the meat section.

I was curious about plant-based meat, so I decided to try some. My options were limited because I am gluten free and many plant-based meat alternatives contain wheat. However, I was able to try a few brands, including Beyond Meat’s Beyond Burger and Beyond Sausage; Jack Fruit Company’s Smoked Pulled Jack Fruit (I made tacos); and Sweet Earth’s Mindful Chik’n Strips (I made stir fry). These alternatives were a bit pricey, but not out of range for a trial run. The Beyond Burgers worked out to $3 for a 4-ounce burger (One pound of traditional ground beef averages about $4 a pound).

My meatless experiment went something like this: “Hey everyone, we’ve got jack fruit tacos tonight!” “What?” My teenage boys replied with cracked voices. “I’m substituting jack fruit for pulled pork, isn’t it exciting?” I was met with a wall of silence and odd looks…a similar scenario followed each new fake meat offering, but they tried each one of my new and scary meals. The jackfruit was not a hit. Three out four liked the sausage and would eat it again. The stir fry chicken was also met positively with all family members saying it really looked, tasted, and had the texture of chicken, and all said they would eat it again. The burgers I initially tried on my own and then exposed them to the family and tried them a second time myself. I wanted to try them twice because they had really fooled me the first time and you know the saying: “Fool me once, fool me twice…” They fooled me twice. My family members concurred; it felt like a “real” burger experience.

If you think that alternative meats are a trend, think again. If it’s trendy and just passing through then ask yourself why would two of the three largest meat producing corporations in the world, Tyson Foods and Cargill, invest in Memphis Meats? They obviously understand the precarious path forward and have undoubtably done the math. Memphis Meats is one of several companies working to develop cultured meats, which is meat grown in a lab. It is sometimes referred to as “clean meat” because the production of the meat is in a controlled environment where there is much less risk of salmonella, e-coli and fecal contamination, according to Sophie Egan in a 2018 article entitled “Lab-Grown Meat: Good or Gross?” in Eating Well magazine.

In August 2013, Mosa Meat unveiled the first lab grown beef hamburger. In March 2017, Memphis Meats revealed it had grown the first lab-grown chicken meat. And, in September 2017, Finless Foods produced the first lab grown fish. Finless Foods fish, or “clean fish,” is identical to the nutritional content of fish and is uncontaminated by micro plastics and chemicals, like mercury, found in wild fish. The process begins when the company sources high quality fish cells and then feeds the cells with nutrient rich ingredients to grow. The cells grow and multiply in a food certified facility. They then structure the cells into fish filets and steaks. Memphis Meats and Most Meats use similar methods. The race is on and competition will undoubtedly drive each to provide innovative products to the consumer and ultimately to the planet.

Cost, regulations and quality will improve as demand soars and markets shift ushering a new age for meat. We can only realize the reward if we can accept the alternatives that are presented. When something is new and different, it can be vilified by competitors and nay-sayers. But what if this new thing is a viable solution for a hungry planet?

Maybe you are still not ready to give up beef. I get it. Beef is delicious. However, there are still things the consumer can do to limit demand on the beef industry and the impact it has upon the environment. One, consider eating less beef. Also, learn about the origins of your beef, the more local your beef, the less carbon footprint it has. One thing that has helped our family reduce our consumption is to think about beef differently. As in, we don’t think of it as an everyday or even every week food. It is special. As with any other special food, it’s enjoyed infrequently and with much anticipation. Steaks just a few times a year, for a special occasion, somehow seem to taste better. I am looking forward to grilling some Beyond Burgers this summer and eating them with zero guilt.

In 1984, there was a short white-haired charismatic old lady that made the saying, “Where’s the Beef?,” famous. Three decades later, I find it amusing that this Wendy’s commercial tag line could mean something totally different. Our questions have expanded to ask: “Is the beef sustainable?” “Where did the beef come from?” “How was the beef treated, was the beef happy?” “What was the beef fed?” “Should I eat the beef?” and, “If I do eat the beef should I feel guilty about it?” In the not too distant future, we may ask: “Is this real beef?” and way in the future…“Where did the beef go?” and “What ever happened to beef?” and my favorite, ‘Wow, this really tastes like beef!”

Summer is synonymous with the scintillating glow and intoxicating smell of a fresh sizzling burger. I’m not sure I can give up this burger experience, but I also love science and math and the path to endless beef consumption has been clearly defined as a reckless and unsustainable activity, not just into the far future, but for right now, at this moment in time. The good news is that we have options. A few weeks ago, my daughter took me to a vegan, gluten free cafe. They had crab cakes. I love crab cakes but haven’t eaten one in about seven years because of a shellfish allergy. I ordered one for $5.95, which is a great price for a “crab cake.” I almost didn’t try it as I had my skeptical hat on, but my daughter urged me on. Guess what? It looked, smelled and tasted like the real thing, so much so that my senses were confused. I proceeded with caution because everything about the experience screamed out – “real crab cake, warning, do not eat!” With each bite I had to remind myself that this was safe for me to eat; I couldn’t believe it. The moral of the story is if you are brave and willing to adapt to our ever-changing world and try plant based or cultured meat you might be pleasantly surprised. The question is: “How adventurous are you?”