An exploration of two gardens in Trappe, both labors of love and colorful examples of hard work, creativity and giving back to nature, friends and ourselves.

In this tale of two gardens, while it may feel like the worst of times, it is the best of times in terms of gardening. With the world in chaos, focusing on creating an edible and pleasant space is a very rewarding way to spend time. By planting edibles and native plants, we can feed both ourselves and nature and, in doing so, we find the connection between planet and plate right in our own backyard.

On Old Trappe Road, hidden from passersby, Robert Camper tends to a plot of land he has lived on since he was a young boy. His quarter acre vegetable patch, while impressive in size to me, is apparently a scant version of the vegetable garden his family kept in his childhood – a robust three to four acres. Those acres were plowed by horses and then each seed was planted without the help of modern equipment. Raised by his uncle who had polio and difficultly walking, Robert’s earliest gardening memories are of his uncle sliding through the rows planting each seed by hand. Robert helped and watched and when he was 12, started a garden of his own. He turned a plot by hand with a shovel, raked it level and used a hoe to make the rows. He planted carrots, string beans, onions, white potatoes, peas, beets and tomatoes. Each year his garden grew, had more variety and when he was about 16, he planted peanuts and they grew so well he ended up with a five gallon bucket full. 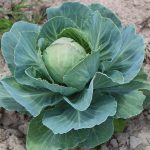 Just beyond where we are standing sits a rototiller and I joke with Robert that at least it’s not horses now and how much easier a rototiller is. The joke was on me, as the tiller had broken, and Robert had tilled his quarter acre with an antique hand plow that was probably older than he was.

What moves me most of all when talking with Mr. Camper is the casual ease in which he tells his gardening story. He tells it as if it is an ordinary event in any person’s life. But it’s far from ordinary, it is extraordinary. To straighten his rows, he uses two sticks and a string. At a time when we as a society has invented many tools to lesson our load, Robert doesn’t buy-in, and his old school garden is one of the most lovely I have ever been lucky to experience.

His pride of ownership is more than deserved and when he mentions he uses no chemicals whatso ever, I notice weeds are kept in check. His hand tiller and garden hoe make short work of them.

We stand in the garden and Robert discusses his secrets to growing great cabbage, why collards and sweet potatoes are his favorite crops to grow and the value of morning dew when you rely only on Mother Nature to provide water. While we chat, I ask him why he gardens: “When I was younger, I wanted to garden because that is what my family did, and I wanted to follow in their footsteps. Now, I would say it’s because I really enjoy watching the plants grow and I enjoy working towards a successful and bountiful garden.” Friends are invited to visit has garden often and much of his produce is given away. Hard work and Robert’s obvious joy of his craft make his garden an unforgettable and heart-warming experience.

Meanwhile, across town is another garden hidden from view. Nestled in a quiet backyard is the garden of Lisa and Alan Willoughby. I have been secretly wishing to see this garden for a few years and when I was invited to visit in June, I was agog with anticipation. As I entered the gate, my first impression upon seeing the green lush that lay before me was an overwhelming sense of peacefulness. There was a calm that surrounded me when I entered, and it was my escort throughout the entire visit.

Artistic whimsy accents this inviting space and as we visited each micro plant community she has nurtured, Lisa tells me a story about each area. I liken these scenes to that of the imagination conjured in childhood books and I would not have been surprised if a spritely fairy visited us during my tour. Lisa says, she’s “been trying to catch them for years.” No luck so far but she has managed to capture the attention of many different birds. With bird friendly flowers like hollyhock, foxglove, purple coneflower, and climbing roses just to name a few… “Four of the bird houses that I have hanging on my front porch actually have birds living in them and not just one kind of bird. Each birdhouse houses a different type of bird species. I actually got to see them come and go out of the houses and it was the coolest thing ever. Different types of birds living in close proximity to one another all living in harmony. There is a lesson to be learned there.” I concur. The hummingbirds love her garden, too, and why wouldn’t they? Lisa has created a sanctuary for these fast, little feathered flyers with hummingbird friendly plants and nectar filled feeders.

We stop in front of a darling handmade garden shed. “My husband Alan built it, my son and I worked on the frosted windows, and my son and daughter-in-law contributed to the decorative elements found on the outside and inside of it.” Hostas and shade trees abound. The tree canopy is welcoming and, with gentle breezes, we find solace under them. The grove boasts two large pecan trees, a descendant of the Wye oak, a silver maple, three redbuds and two Japanese maples. Lisa’s favorite natives include purple coneflowers, black eyed Susans, and all members of the coreopsis family.

As the sun began to bow to the horizon, I left rejuvenated and I was reminded of the restorative properties of gardening I once read about as a child. Upon arriving home, I went upstairs to my bookshelf and promptly opened “The Secret Garden,” by Frances Hodgson Burnett. 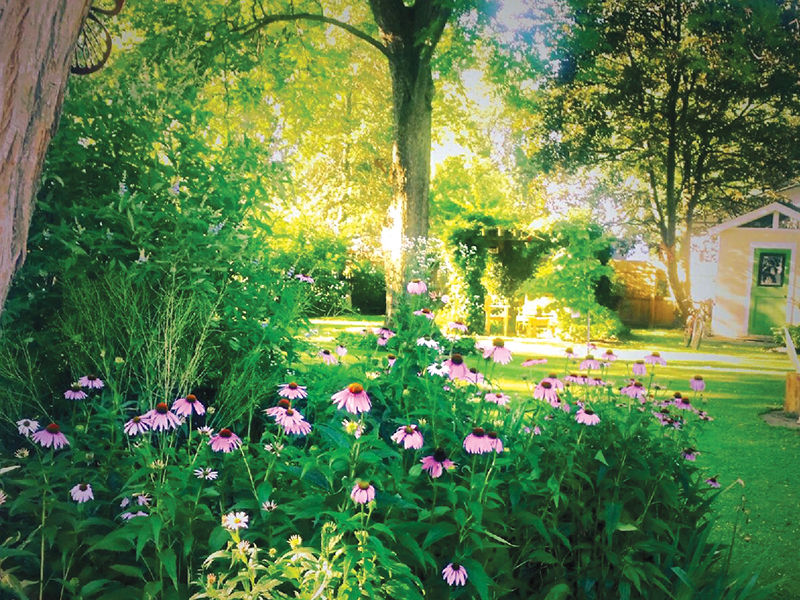 It’s easy to conjure up spritely fairies in the enchanted garden at the Willoughby home.

As fate would have it, I opened directly to page 216: “ …tendrils of the fair green veil of tender little leaves had crept, and in the grass under the trees and the gray urns in the alcoves and here and there everywhere were touches or splashes of gold and purple and white and the trees were showing pink and snow above his head and there were fluttering of wings and faint sweet pipes and humming scents and scents. And the sun fell warm upon his face like a hand with a lovely touch. And in wonder Mary and Dicken stood and stared at him. He looked so strange and different because a pink glow of color had actually swept all over his ivory neck and face and hands and all. “I shall get well! I shall get well! And I shall live for ever and ever!”

And while we cannot live for ever and ever, these two rejuvenating gardens of Trappe made me feel as if I could for a brief moment in time, and that in itself is magical. Though each garden was uniquely different from the other, these keepers of the gardens, Robert and Lisa, share a unifying theme of desire to be connected to the natural world, and the planet is all the better for it.