The Mid-Atlantic Symphony became the first orchestra in the region to perform before a live audience since the COVID-19 outbreak when it presented its rescheduled 2019-2020 season finale concert in Easton, MD on August 13.

In another first for the Mid-Atlantic Symphony, the concert also was live streamed, with the program subsequently rebroadcast and posted on the Orchestra’s YouTube and Facebook pages.

“The Mid-Atlantic Symphony is committed to working proactively to ensure the safety of our audiences and musicians, and to fully comply with state and local government guidance on public gatherings,” said Board Chair Jeffrey Parker. “We also remain focused on our mission to inspire, enrich, educate and entertain diverse audiences of all ages through live musical performances – a mission that takes on added importance amid the ongoing pandemic.” 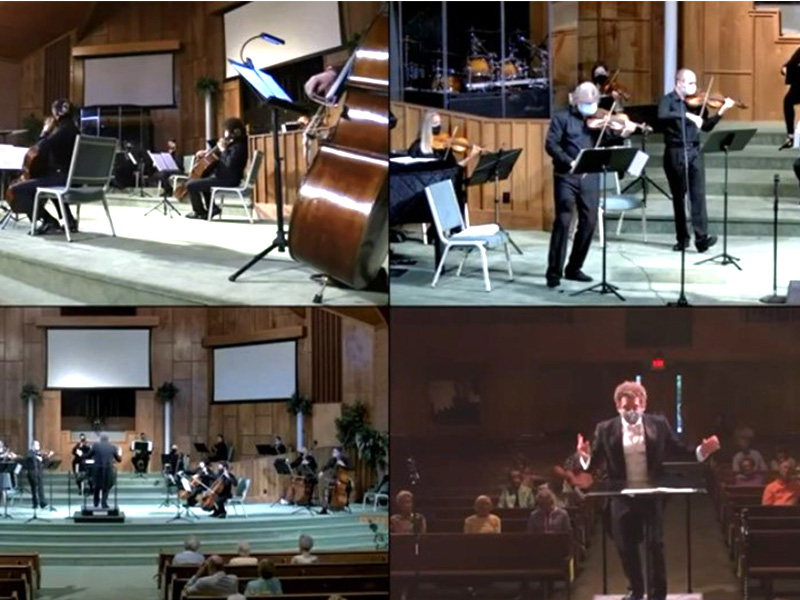 Parker said Music Director Julien Benichou and the Orchestra’s board and staff have made multiple adjustments to resume live performances during the current health emergency. In addition to live streaming, actions included screenings and socially distanced seating for audience members at the Church of God in Easton, as well as creating an all-strings program to avoid the potential for aerosol sprays from woodwind and brass instruments.

“We are fortunate that there is a broad repertoire of exceptional orchestral music for strings, spanning several centuries,” Maestro Benichou said. “Ironically, many of these works were composed early in the 20th Century, as the world was dealing with a devastating influenza pandemic.”

Parker said the concert, enthusiastically received by the live audience, will serve as a model for the Mid-Atlantic Symphony’s 2020-2021 season. Plans for the season, currently envisioned to include both live audiences and live streaming of each performance, will be announced in the near future.

“The Mid-Atlantic Symphony will continue to adjust to evolving government guidelines, responding with agility to bring live and virtual audience members an outstanding musical experience while ensuring the safety of everyone involved,” Parker said.

For additional information about the Mid-Atlantic Symphony Orchestra, visit www.midatlanticsymphony.org, or call 888-846-8600.