On a cool, sunny February morning, I met Sonny and Karli Diefenderfer on a remote windswept waterfront property in Windy Hill, Maryland. I was there to learn about muskrat trapping. The footpath we followed to the river was cushioned by pine needles and flanked by phragmites, and as Karli walked beside me, I was instantly captured by this atypical teenager’s tale. She confided she doesn’t watch television and is working extremely hard in school as she has aspirations of attending the U.S. Naval Academy. With her long list of activities, you wouldn’t think she had time to trap muskrats, but she finds it. Karli, who is a senior at Easton High School, began helping her grandfather when she was just 6 years old, and now at 17 knows a great deal about these marsh rabbits. When I ask her what she likes best about trapping she says, “I like spending time with Pop, and I like spending time on the marsh; it’s beautiful. It’s a bonus when you walk away with something, too.”

Dressed in hip boots and anxious to check their traps, I watched this grandfather and granddaughter team work together with little conversation, a testament to continuous seasons together and a practiced routine. It is immediately obvious, when, where and how to set the traps comes naturally after years of experience.

“You set the traps at low tides on the pipes,” Sonny tells me. The pipes are the winding little tunnels and ditches that weave their way through the marsh, some no bigger than six inches wide. “The muskrats will swim in during the high tide to snack on the vegetation at the edge of the marsh, and that’s when you catch them.”

This is when I learned that muskrats are vegetarians, feeding on the cattails, sedges, water lilies, arrowheads and duckweeds. While “rat” is the fixating part of their name, Sonny prefers the term marsh rabbit to muskrat. “Anything that has the word rat in it, turns people off,” he said. Understandably so.

As we walked along the riverbank, a crackling noise sang to us deep within the structure of the marsh. These lowlands beneath our feet were waking up as the sun grew warmer, brighter and taller in the sky. We happen upon a full trap and Sonny easily removes a muskrat. As we walk along checking traps, I notice smiles come easily and stories abound. We walk a little, talk a little and stop to check traps. Today they have set two dozen.

Sonny has been trapping his whole life, watched the prices soar and then fall as demand waxes and wanes. On this day, meat is selling for around $3 and hides about $4.50 each, but price changes often and is subject to the whims and fancies of the fur and local meat market. Once their catch is rinsed off in the river, they are placed in a large mesh bag that Karli swings happily by her side as we walk along the river shore. I know we’ve picked a perfectly sunny, calm day and trapping is not always so gleeful in harsher conditions. “You wouldn’t have wanted to be out with me the other day,” Sonny chuckles. “There was a cold wind, I believe it was 17 degrees. That cold wind will knock you right out.”

As we walk and talk, Sonny recalls pleasantly Karli’s first muskrat trapping experience. “She was just six years old and I was working a pond. She waited along the edge for me to toss her a rat and she dragged them up the bank by the tail. It snowed that day, and her snow boots left a trail behind her as she climbed the bank with a muskrat in her tiny hand. Red faced from the winter wind, she smiled the whole time.”

Our conversation pivots to the National Outdoor Show in just one week. Sonny is teaching Karli how to skin muskrats this weekend in preparation for entering the next skinning contest. Later that day, Sonny would pull up in my driveway and show me how it’s done. In just a few minutes he had the muskrat skinned and the hide on a stretcher. It seemed quick to me, but Sonny says he takes his time because nicking a hide makes it unsellable.

My time on the marsh with Sonny and Karli left me vibrant inside. Like them, I, too, very much enjoyed my time in the marsh. The sun, stories and ease in which the two worked together was enough to resonate good feelings to anyone willing to walk the water in winter. Alive with what could only be described as muskrat love, the following weekend I headed to the outdoor show with my family. My husband and boys have been many times, but it was a first for me. The outdoor show, in its 75th year, celebrates all things outdoors: hunting, trapping and cooking wild game, oyster shucking, duck, goose and turkey calling, log sawing, the Miss Outdoors pageant and handmade crafts. Featuring competitions in raccoon and muskrat skinning, the muskrat skinning is the pinnacle event – after all, it is the World Championship. 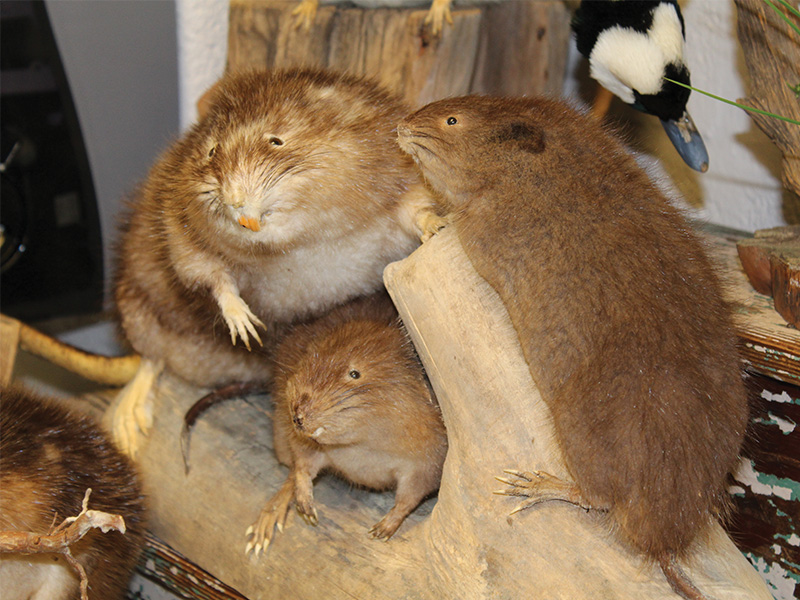 I had only tasted muskrat once in my life, before the Outdoor Show. My husband’s grandmother used to cook it and, after tasting it many years ago, I never thought I’d eat it again. However, caught up in all things outdoors I decided to give it another try – it was delicious. It was much better than I expected and tasted much like a tender pot roast. I bought a National Outdoor Show cookbook.

I had another trapping friend deliver two fresh skinned muskrats that next week. My husband, Chef Brian, would quarter them and lay them to soak in saltwater overnight. After an afternoon of preparation, eight of us would sit down to a family dinner. We would feast on venison pot roast, garlic mashed potatoes, buttered string beans, fresh yeast pan rolls and the featured dish… muskrat. The marsh rabbit was a first for most of the family and most enjoyed it. However, the real test was the reaction from our soon to be son-in-law, who is not from the Eastern Shore. Being good natured and willing to put up with our shenanigans, he went back for seconds.

Please note that muskrat season runs from January to mid-March and will likely only be available in those months.

Riverview at the Point

This recipe cooks best in a 4-quart ceramic coated Dutch oven with lid. Soak the muskrats overnight in salty water. Drain, rinse and pat the muskrat quarters dry. Mix flour, salt and paprika and dredge the muskrat pieces in the flour mix. Set aside. Meanwhile, cut the bacon in ½-inch strips and fry until about halfway cooked or long enough to render the fat. Then add in the shallots, celery, thyme, sage, salt, pepper and garlic. Cook a few minutes longer until ingredients become translucent and just begin to lightly brown. Remove from heat and remove the contents of the pan into a bowl, leaving the drippings. Dredge the muskrat a second time in the flour. Return the pan to the heat and with the drippings brown the muskrat on both sides. When nicely browned, place the bacon, vegetables and seasonings on top and add 3 cups beef stock to the pan. Cover and place in the oven for 2 hours at 350 degrees. Serves about two as a main dish or 6 to 8 as a tasting.