For no less than a million years, Beavers (Castor canadensis) have been sculpting the continental landscape by controlling the flow of water and the accumulation of sediment, filling whole valleys and rerouting rivers. They are a classic keystone species in that they create conditions that support entire ecological communities and raise the water table in areas where they reside. They also cause trees to evolve to develop defenses against wood cutters. Some plants defend themselves from being eaten by manufacturing secondary metabolites that are unpalatable to herbivores (Johnston, 2017). As an example, Beavers avoid poplar species that contain condensed tannins (Johnston, 2017). Balsam poplar and white spruce, two species of trees that Beavers avoid, contain the highest concentrations of phenolic compounds.

Due to their work ethic, Beavers have become the symbol of diligence and industriousness. They prefer to work under cover of darkness, and this nocturnal behavior, along with their preference to stay low in the water, doesn’t allow us much of a chance to see them in action. They are amazing eco-engineers. By damming small streams to create open water and wetland habitat, they have incredible impact on their surroundings. This work provides a home not only for the beaver and its family but for countless other species that depend on the conditions the Beaver provides. Critters that depend on the habitat created by Beavers include amphibians, fish, ducks, geese and many others. The biodiversity supported by this habitat rivals that found in tropical rain forests (Backhouse, 2005). Almost half of the endangered and threatened species in North America rely on wetlands. The removal of Beavers from their natural setting results in decreased habitat quality and an area that can be used by fewer wetland species.

Beavers build dams to create open water. This allows them to move trees by floating them and to store vegetation under the water for use during winter. They cut down a tree by chewing around the base until it falls and then cut it into manageable lengths so it can be moved through the water to their dam or lodge.

Lodge construction starts under water by building a mound with different-sized branches and logs. They fill in the gaps with mud and debris until the mound rises above the surface. Once it is big enough, the beavers gnaw their way up through the mound from under water, creating an entrance tunnel and living quarters above the water line. Finally, they use their front paws to plaster the exposed exterior with mud, which will harden while leaving a few small holes for ventilation. Keeping the entrance of their lodge under water helps protect them from predators.

Once Beavers have created open water with their dam, they excavate the mud to create canals so they can reach more trees. This extends their opportunity to get around by swimming. Beavers are ungainly on land but, once they hit the water, they can move with great speed. They can walk on their hind legs, balancing with their tail as they carry mud and vegetation in their front feet to patch their dam or lodge. 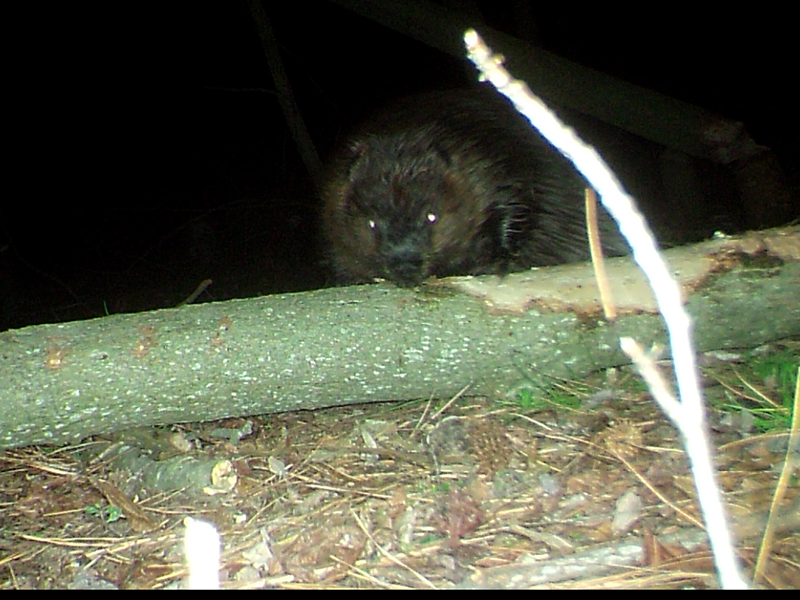 Beavers are excellent water managers. They can completely transform their environment, turning a willow and birch woodland with a trickling stream into a rich mosaic of pools, dams, canals and bogs. This environment can hold a great deal of water that would otherwise run downstream and cause flooding in times of heavy rainfall.

Beavers do not hibernate. At the first sign of frost, they begin to hoard food, which comprises logs, branches and other vegetation, under water. They will be able to swim to this stash under the ice from their lodge, thus preventing their exposure to predators.

Throughout the years, some people have not appreciated the Beaver’s charms and have referred to it as a large rat. Beavers belong to their own order, Castoride, making them only distant cousins of rats in the Rodentia order. Other terms that have been hurled at them include “dentally defective” and “toothy tyrant,” due to their oversized front teeth and their penchant for felling trees.

They can wreak havoc on a tree plantation and cause flooding to roads, but this can be managed by using tree protectors and installing beaver deceivers, which will allow water to flow without attracting the attention of the industrious Beaver.

Native Americans had an intimate relationship with the Beaver. Not only did they use it for fur and meat, they grew crops in the fertile soils left behind by abandoned Beaver areas. They fished in ponds and lakes created by the Beaver and based a great deal of folklore on the animal. One such story from tribes in the Northeast claimed that a giant Beaver had dammed the St. Lawrence River to create the Great Lakes. The Beaver’s importance to a particular tribe’s diet and material culture depended on its availability. Archaeological evidence of this relationship includes the knife-scarred bones of Beaver butchered 3,700 years ago and fragments of Beaver pelts in a 2,000-year-old burial mound.

Trapping Beaver for their pelts up to the 19th century left the population so low it was feared it would not recover. Today, the population is widespread and common in many parts of its range. Oregon is known as the Beaver State due to its long history of fur trade.

Beaver ponds prevent erosion by slowing the water, allowing sediment to settle out and build up fertile soils once the Beavers move on. They reliably and economically maintain wetlands, alleviate droughts, raise the water table, provide habitat and purify the water.

What’s not to love about Beavers and the environment they create?

See a beaver in action

Once They Were Hats: In Search of the Mighty Beaver, Frances Backhouse, 2005.