Searching for sea beans, sea glass, driftwood, shells and other interesting things makes long-time beach lover Harriett Downes-Slaughter happy. She enjoys scouring the beaches of Delaware, Florida, Maryland and Mexico for little hidden treasures. What is treasure to beachcombers is often considered trash to others. And beachcombing is not just for warm summer days. Winter days close to 50 degrees with calm winds are great for wandering along local shorelines. Bundle up and enjoy the adventure! Remember to take a small bag for collecting and another bag for trash. Beachcombers like to leave the beach in better condition than when they arrived.

Harriett loves “finding unusual items that other people would step right over and not consider a treasure at all. When I get home and look at all I have collected that day, it’s like ‘wow.’ I found all these interesting things, and they were free right there on the beach waiting to be picked up.”

After a very successful year of beachcombing in 2020, Harriett was brainstorming about how to display her beach finds in a new way.  “I was walking along the beach on the east coast of Florida thinking that on this particular day there were a lot of beautiful scallop shells to be picked up and the many different colors are so pretty. I wondered how I could display them, rather than just place a whole pile in a basket or a bowl. Then my creative little brain started moving along as I was strolling the beach and I got a new idea,” explained Harriett, Attraction magazine’s proofreader, and lifelong beachcomber.

“I had containers of assorted collections of shells, sea glass and sea beans that I had picked up over the years and I felt like I needed a better way to display them. I was trying to think of how I could put some of them in a frame to hang on the wall and then it occurred to me that it could be 3D if you kept the glass off.”

Recently, Harriett’s 3D creations were featured in the January/February issue of Beachcombing magazine, a California based publication which is dedicated to beachcombing, beach travel, coastal arts and coastal living around the world.

Here, she shares her “how-to” with readers:

Create a striking 3D framed piece with the following easy steps using shoreline finds such as seashells, beach glass, interesting rocks or pebbles, sea beans, driftwood, and even feathers. Many of the treasures featured in this project were found in Florida. In this project, Harriett featured sea beans, including coconut, hamburger, sea heart, almond, coin vine, tropical walnuts, antidote vine seed and crabwood seed pod. The Gulf Stream magically deposits many different sea beans along the East Coast of Florida, some from as far away as the Amazon River.

Foam board cut to fit inside the frame

1. Gather all your supplies in a large workspace. Sort through your collection picking out the ones to be used in your project. It’s easier to see what you have if you organize them by type. Be sure to include a number of small items to fill in holes. 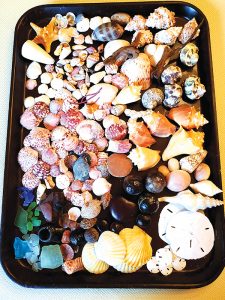 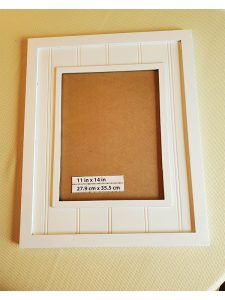 3. Make a plan for how you want the final piece to look. Lay out the major pieces starting in the middle and work your way around the foam board as you add things. 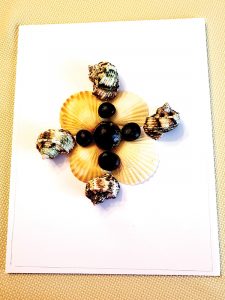 4. Harriett finds it more effective to group like things together rather than spreading them around your art project. Once you like the look you have laid out, start using the glue gun. Continue to build your design using bigger pieces first and then filling in with smaller pieces. The tweezers will come in handy when placing your small items. 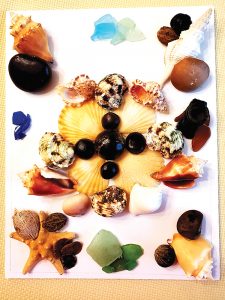 5. Stop occasionally to remove any “glue strings” left behind. The tweezers are helpful for that, too. Before using the Mod Podge, give the project another look for “glue strings” to be removed. 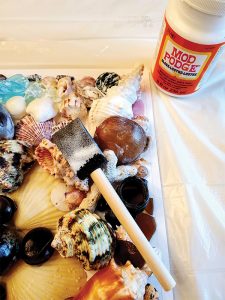 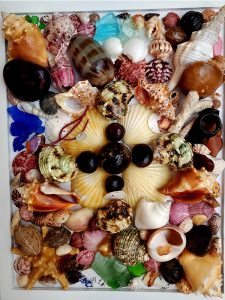 After a lifetime of beachcombing, finding a new way to display her treasures was ideal in Harriett’s situation. She added, “I needed to consolidate the collection in some way and hanging some of the better pieces in frames on the wall is a good way to do that. Now I just need more wall space!”