It’s always a thrill to feature a Marc Castelli painting on the cover. Marc has been gracious to allow Attraction magazine to publish his watercolor paintings over the years. “Flocks / Edna Lockwood / Flying Cloud” was part of Marc’s annual, one-man exhibit, entitled “Shouting at the Wind,” at the Massoni Gallery in Chestertown last November. For 26 years, Marc has exhibited paintings at the Massoni Gallery that are intimate perspectives on the lives of watermen, gained by his active involvement on their workboats. 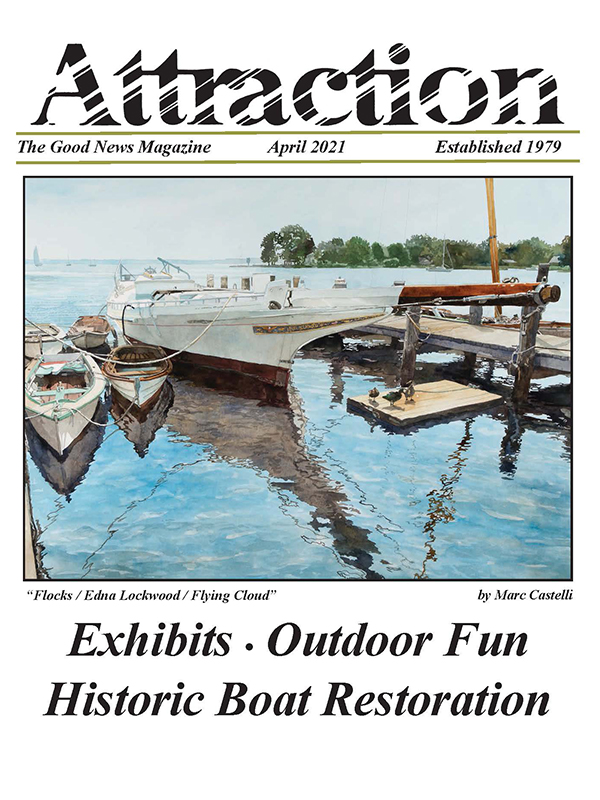 For the watercolor “Flocks,” Marc painted the bugeye Edna E. Lockwood, which at that time (Fall 2018) was nearing the end of a rebuild by the Chesapeake Bay Maritime Museum. In the painting, she is floating to allow the logs in the nine-log hull to expand in the water, thus sealing them.

Marc has been documenting boat builds and rebuilds for over 20 years and completed 400 pen and inks of the Lockwood rebuild. “During the refit/rebuild of the bugeye Edna Lockwood, I would travel 100 miles round trip down from Chestertown to the CBMM in St. Michaels for at least three days a week in order to stay current on the rapidly evolving steps,” Marc explained.

“The day in this watercolor was bright and the slip around the Lockwood was filled with bateaus, skiffs and a float used by the riggers to work the bobstays. The float even had a most cooperative flock of ducks, a subject I do not actively pursue as a subject. The small flock just added a small detail. The title, ‘Flocks,’ is a reference to not only the ducks but also the group of small boats and the two log boats built by J.B. Harrison. Those are Edna Lockwood and the racing log canoe, Flying Cloud in the background.”

The Flying Cloud is currently on the home stretch of her own rebuild. What was so monumental about the Lockwood rebuild, in part, is that she was the last known bugeye still working under sail at that time. There are no recorded bugeyes built after 1918 although existing bugeyes continued to work the water. By 1896, bugeyes had fallen out of favor for the skipjack. John B. Harrison of Tilghman Island built the Lockwood, his seventh of 18 bugeyes, for Daniel W. Haddaway, his neighbor, in 1889.

The Edna E. Lockwood dredged for oysters for various owners until 1966 when John R. Kimberly purchased her, then repaired the bugeye to be sailed as a pleasure craft. In 1973, John donated her to the CBMM so that she would be preserved for public education there. The museum gave the Lockwood a restoration in 1975. In 1986, she was nominated to the National Register of Historic Places. In 1994, the Lockwood was named a National Historic Landmark, representing the last historic bugeye still under sail. In 2016, the restoration began at the museum. On October 27, 2018, the Edna E. Lockwood was relaunched. Fun facts: To restore the Lockwood, it took nearly 25,000 man hours and cost about $1 million, with major support provided by Richard and Karen Kimberly, Bill and Maxine Millar, and Ginger Martus.

And Marc was along for Edna E. Lockwood’s transformation from trees to mast stepping and rigging. “It’s not often an artist gets to see, let alone document, such things. We do live in a very target rich area so to speak,” he summarized.

Wherever he trains his focus, from the Sultana to the simplest of skiffs, he brings to the viewer a deeper understanding of the magic of the Chesapeake.

For more information about Marc, visit www.marc-castelli.com or www.massoniart.com. Through April 30, 2021, the MassoniArt Gallery is having a sale on most work being exhibited, including Marc Castelli’s.