Since 2009, The Last Skipjacks Project has meticulously chronicled the skipjacks of the Chesapeake Bay as a testament of their enduring service. It has been a labor of love for Cyndy Carrington Miller who started and has maintained the website for 12 years.

Cyndy’s love for skipjacks started when she began crewing on board the Nathan of Dorchester, a skipjack christened in 1994. The Nathan has served as ambassador to Cambridge and Dorchester County ever since. During Cyndy’s time crewing for the Nathan for 13 years, people were forever asking how many skipjacks commercially dredged for oysters and how many remained on the Bay. The answer was always murky. In 2009, she devoted herself to finally getting an answer. Again, it proved to be elusive.

That’s because the status of skipjacks changes day to day, making the Project a work in progress. It documents the skipjacks that are sailing, working, under restoration or still visible in some form. This central repository of skipjack history is a fascinating look into the past.

A skipjack is a sailboat used to dredge oysters on the Chesapeake Bay. In the 1890s, skipjacks were favored over the bugeye to dredge oysters as they were cheaper and easier to build and were better adept at navigating shallow water. A skipjack is a single masted, two-sail sloop rig ranging in length from 25 to 50 feet. As many as 2,000 were built and hundreds worked the Bay at the same time. Sadly, only a small number of skipjacks remain today.

The skipjack was designated the state boat in 1985, when fewer than three dozen licensed and working skipjacks dredged the Bay. In 1999, the Chesapeake Bay Skipjack Fleet was recognized as a national treasure in danger of extinction. In 2002, the fleet was named to the list of America’s Eleven Most Endangered Historic Places by the National Trust for Historic Preservation. Most skipjacks today operate commercially in the tourist trade or as floating classrooms.

Cyndy is looking for skipjack lovers to help maintain The Last Skipjacks Project. Anyone interested may contact her at cyndy@crazychiquita.com or visit http://lastskipjacks.com.

Some other interesting skipjack trivia, compliments of The Last Skipjacks Project:

Rebecca T. Ruark – In 2003, the U.S. Department of the Interior designated the Rebecca T. Ruark as the oldest vessel in the skipjack fleet. She was built by Moses Geohegan in 1886 on Taylor’s Island for William T. Ruark, who named the skipjack after his wife. Ninety-eight years later, Wade Murphy, Jr. bought Rebecca and still owns her today, operating sailing tours out of Dogwood Harbor, Tilghman Island.

Elsworth – This 40-foot skipjack was built in 1901 and dredged oysters until 1996. The Echo Hill Outdoor School has owned the skipjack since 1988 and rebuilt her in 1996. It is now used for educational programs, helping students connect to the ecology and history of the Bay.

Minnie V – The Minnie V, built in 1906, was featured as the working skipjack in the Homicide: Life on the Street television show in the episode entitled “The Last of the Watermen.”

Dee of St. Mary’s – The Dee is one of the largest skipjacks ever built and one of the youngest, having been built in 1979. She was the first skipjack to be built on the Western Shore of Maryland since 1914. Francis “Jack” Russell commissioned the skipjack and dredged her until about 1990 when he retasked her as a floating classroom, until about 2010. In 2013, the Dee was transferred to the Calvert Marine Museum in Solomons Island where she continues her educational mission and provides public sails. 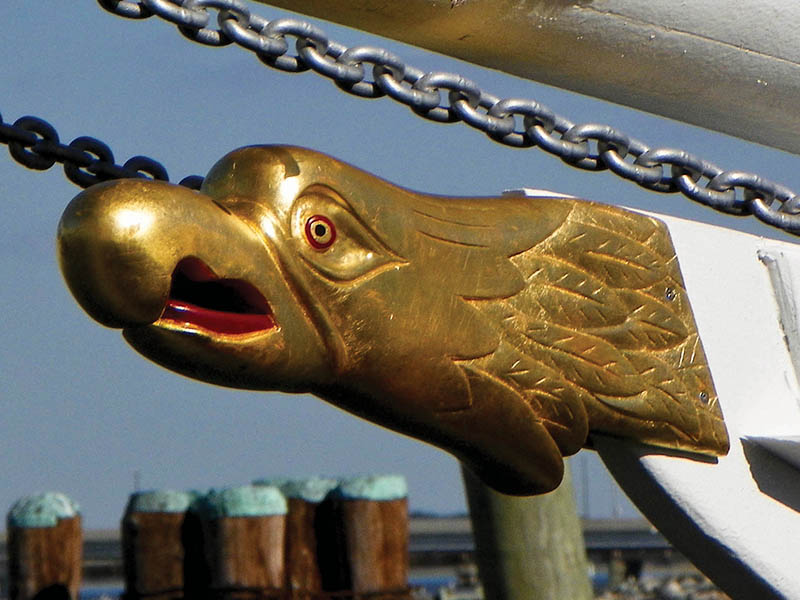 The Dee of St. Mary’s golden eagle was carved by Pepper Langley and presented in 2013 as the new figurehead when the Calvert Marine Museum assumed ownership from Captain Russell. Photographs courtesy of Cyndy Carrington Miller.

Origin – It is unknown how a skipjack design evolved, but it may have evolved from smaller crabbing skiffs along the Bay. The design may also have come from New England where a similar vessel was being used there for oyster dredging. Either way, Cyndy says that the Chesapeake Bay adopted the skipjack as its own.

Skipjack – Look up the word skipjack and you will discover that it’s a bonito tuna. The origin of the name skipjack for the vessel is unknown. Some guess that it was named after the tuna while others say there once was a boat named Skipjack.

Power – Skipjacks, the last working boats under sail in the country, were built for power, with the largest carrying as many as 500 bushels of oysters.