Magic is sneaking out as you read this. Believe it. Magic cicadas are about to make believers out of all of us. That’s right. Magic cicadas. And you can freely admit to believing in them. 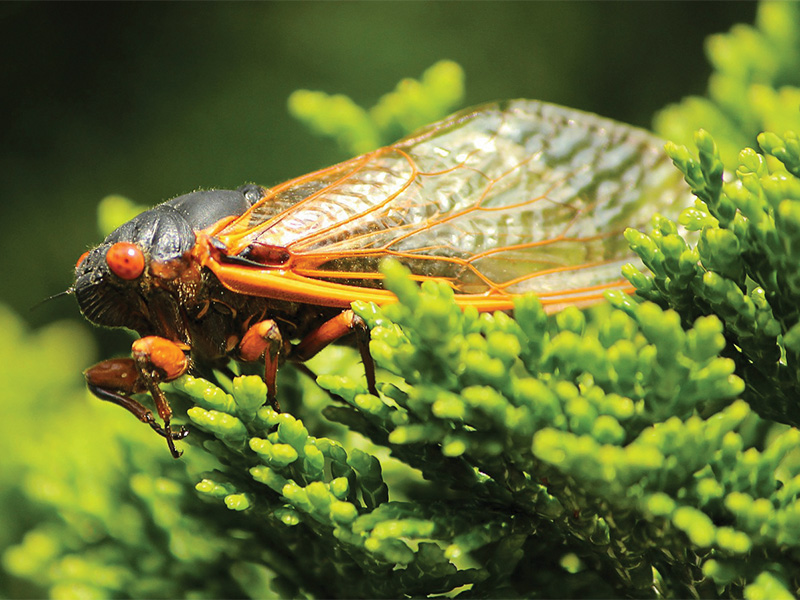 Generally known as “Brood X” the true name for this year’s 17-year cicadas is “Magicicada septendecim.” Oh, it’s just too good to be true. Usually, the common names of plants are better than the scientific names, but here even science is under their spell.

It gets better, too. There are other magic cicadas. Two 13-year species, Magicicada neotredecim and Magicicada tredecim, are, along with this year’s star, Magicicada septendecim, known as “decim periodical cicadas,” although none of them actually appear in 10-year intervals. Decim refers to “Brood X” – X being the Roman numeral for “10.”

These bugs are tailor-made for a B grade sci-fi movie. Huge red eyes. Attention getting orange on the wings. Black “bad guy” body. Large, fierce looking pincer type front legs. And the noise. Ah, the noise. All they need is some radiation or some alien’s meddling to be utterly perfect for that movie. As it is, they embody weird by hiding for so many years before bursting onto the scene every 17 years.

But, B grade movies aside, these are just bugs. Unlike most other insects, they’re really bugs. “True bugs,” in fact, part of the insect order (a scientific naming/sorting classification) Hemiptera, which is a whole genus of…bugs. Really, truly, bugs.

Don’t let it bug you…just get ready to hear them, walk on them, swat at them, even eat them.

Brood X Magicicadas are set to march on Maryland.

It’s just once in 17 years. Oh, they can straggle out anywhere from 15 to 21 years after hatching, but they seem to want to all appear at once every 17 years. Why? There’s no proof, but it’s thought that the “let’s go NOW” emergence in fantastic numbers could be an evolutionary adaptation to their tasty deliciousness to birds, frogs, toads, humans…

A couple of lonely cicadas just might find a mate, but most likely will be eaten by a hungry bird, frog, snake, squirrel, possum, fox, even most dogs. They’re a wonderful meal, big enough at 1 to 2.5 inches to feed even a large crow and come out in such numbers there’s plenty for everybody. They move really slowly and make so much noise calling for a mate that they’re hardly hidden. They’re tasty (I know people who’ve eaten them), so birds and other creatures gorge themselves on the bugs.

Of course, like any of us, birds et al get tired of eating the same thing day after day. After several days of non-stop cicada munching, they seem to get bored with them. It’s almost human – “oh, another dumb bug with red eyes. Isn’t there anything else for dinner?”

Thus, after the near extermination of the “early bugs” the later emergents, the really slow ones, get to crawl up a tree, molt a final time, turn from white to black with big red eyes, and call for a mate in peace. It’s hard not to root for them. They’ve spent 17 years underground, patiently chewing roots. If they aren’t eaten, they can call for a mate – another really slow cicada who evaded the predators by moving slowly.

Unlike crickets, who rub their wings together to make their noise, they’re using a special organ called a “tymbal” that produces the sound. The male’s tymbal is a ridged organ, resembling a whale’s baleen; it sounds painful, but the cicada flexes its muscles, forcing its “ridges” to buckle one after the other with great speed.

After mating, the male wanders away while the female gets busy. She’ll slice deep slits into new wood and lay her tiny eggs in neat rows. Then she, too, disappears.

Four to six weeks later tiny nymphs fall out to the ground. There they tunnel downward until they find suitable roots to chew on. They generally go roughly 10 feet down but have been found as deeply buried as 30 feet. They’ll stay underground, chewing tiny little bites for 17 years slowly growing bigger until, at last, after 17 long years the soil temperature hits 64 degrees and they begin their (slow) toil to the surface, where they (slowly) crawl up a tree and molt a final time. Finally, they emerge and start the great “Brood X” phenomenon all over again. This is an odd case of the race goes to the slow!

Yes, they’re noisy. Yes, they’re red eyed bugs. Yes, they can actually damage very young trees (established trees do fine). You can protect young trees if you like with gauze netting. Please don’t use insecticides which will likely kill everything but the cicadas – cicadas aren’t going to eat anything so they won’t eat it, and something so powerful it can get past their hardened “skins” (carapace) will kill anything at all, including birds. Remove the gauze as soon as the cicadas disappear in July.

Relax, enjoy them, use them for fish bait (they’re supposed to be very popular with fish) and eat them if you like.

If you’re an adventurous eater, get up early to collect your dinner. Cicadas tend to emerge at first light and, having found their likely tree, will proceed to molt. Grab ‘em when they’re still soft and white – the carapace (skin) hasn’t had a chance to harden. Gather at least twice as many as you intend to eat, as the females are much tastier and it’s difficult to tell the difference until you start to cook them. Pop them in the fridge or freezer and prepare them like a world class chef. Remove the wings, head and legs for best cicada munching. (If you have a shellfish allergy you should avoid these “treats.”)

Google Cicada recipes and you’ll find quite an array of different “gourmet” specialties. After all, if you can’t beat ‘em, eat ‘em. Many speak of a peanut butter flavor with these protein packed goodies, so use them wherever you’d toss in some peanuts (the texture is said to resemble soft-shell crab). Others think they taste like bacon, so, bacon lovers, get ready for a treat!

Chocolate covered cicadas. Very easy; roast your cicadas (wings, legs, head removed) for 15 minutes at 225 degrees, then dip in melted chocolate and refrigerate until the chocolate hardens. You know you want this!

Or, perhaps you’re a fan of Asian food. Crispy wok tossed cicadas might be for you. Marinate the bugs and you’ll find the females plump up while the males shrivel (toss the males out). Or oven roast them and toss them on your favorite pizza to make a once-in-17-years treat. Cicada chili. Cicada dumplings. Use your beloved Old Bay seasoning to make a unique, Maryland specialty Cicada dish. Or, of course, simply fry them. Frying makes almost anything taste good. Roast them to dry them, make a protein packed flour…The sky’s the limit!

Maureen Rice is a Master Naturalist living and writing in Talbot County.