As this column is about food you may be perplexed as to why I have taken up space discussing paper towels. I am writing about paper towels because, for most of us, paper towels hold a prominent place in the kitchen, usually next to the sink or maybe under a convenient cabinet. I buy lots of them, I love them. I have wrapped sandwiches in them, cleaned dirty faces, wiped counters, sopped up spilled milk and used them liberally for pet messes. Paper towels are a kitchen favorite of mine. I buy them in at least a six pack, or sometimes if I’m feeling wealthy, I’ll splurge on a 12 pack – all to feed my addiction of mess be gone.

We used paper towels sparingly growing up, and hands were mostly dried on tea towels that were replaced often. So, I can’t blame my excessive paper towel use on my upbringing. I believe my addiction started when I was a young mother. Funny, I used cloth diapers and cloth bibs but gave no thought to grabbing paper towels for nearly every other mess thrown at me. And with toddlers, there are a lot of messes. Paper towels were an easy “go to,” a way to have some control over the chaos, and a quick response for the prolifically sticky lives of young children. 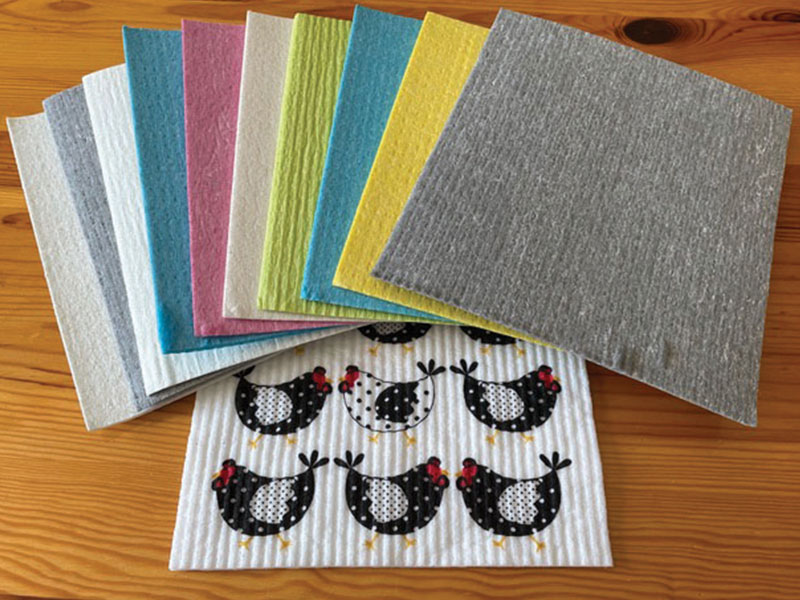 According to an article in The Atlantic by Joe Pinsker, “In an era of waning American exceptionalism, inhabitants can at least pride themselves on an underratedly important, probably shameful distinction: They reside in the paper-towel capital of the world. This status is unquestioned. According to data shared with me by the market-research firm Euromonitor International, global spending on paper towels for use at home (but not in office or public bathrooms) added up to about $12 billion in 2017, and Americans accounted for about $5.7 billion of that total. In other words, the U.S. spends nearly as much on paper towels as every other country in the world combined.”

While you digest that staggering figure, let’s turn our attention to the city of Philadelphia where the Scott Paper Company was born. As the story goes, in 1907 a train car of long thick paper rolls arrived at the Scott paper company, and they were deemed too thick to use for toilet paper. However, Arthur Scott, the owner of the company had heard about a local school teacher who had an idea to help fight colds in school…by using paper towels in classrooms versus traditional cloth. By 1931, the company introduced them for home kitchen use, making paper towels a relatively new invention.

Paper towels are made from softwood trees like pine and spruce. Once the bark is removed it is chipped into small pieces. A chemical process dissolves the bonds in the wood fibers turning them into pulp. The pulp mixture can then be shaped – after it’s bleached. Wood pulp is naturally brown. It is filtered through screens to remove contaminants and to make it as fine as it can be. It is then run through machines designed to make it into paper and it is combined with a resin to make the fibers bond to each other. Finally, it is run through more heat rollers and dried. This process is used to make nearly every kind of paper, but it doesn’t stop here for paper towels. Paper towel paper is not pressed as hard as other types of paper. For two-ply paper towels thin layers are then bonded together to form one sheet, usually with some type of light, harmless glue. The layers are also embossed so that small pockets of air are trapped within the sheets. These pockets help to absorb water.

Paper towels are essentially biodegradable, but that doesn’t necessarily make them environmentally friendly, especially if they never end up in a compost pile. According to the EPA in 2018, consumers used 3.8 million tons of tissue paper (not toilet paper), paper towels and paper napkins. The “EPA did not identify any significant recovery of tissue products for recycling, although some composting of these items exists.”

After reading quite a bit about paper towels, I decided I would try to limit my paper towel consumption. What are the alternatives? Enter the Swedish dish cloth, a dream come true for me. Here’s the good news: One Swedish dishtowel can replace about 15 to 17 rolls of paper towels. They are made of renewable and natural fibers 70% cellulose and 30% cotton. They can be washed in the washing machine or even the dishwasher and they dry super fast so they do not get smelly like sponges. Ranging from $2 to $6.95 per cloth, the financial savings is significant. Let’s also pay homage to the traditional tea towel. While the Swedish dish cloth is awesome for wiping down countertops and sopping up spills, the tea towel is still queen when it comes to drying hands and dishes. It must have been karma in the air but just the other day my mother-in-law handed me a stack of her mother’s clean white flour sack tea towels. They are at least 50 years old, and they still dry dishes well. You just can’t beat that kind of sustainability.

Today I hung a sign over top of my paper towels that says, “Can I use a tea towel or Swedish dish cloth instead?” I also put a small piece of masking tape across the next towel. About an hour later I came down and the masking tape was gone. I asked my son, “Did you use a paper towel?” “Yes – to clean the frying pan,” he said rather proudly. I said, “Did you see my sign?” “Yes, he replied a little less enthusiastically. “So why didn’t you use a sponge or dish cloth?“ I asked. “Well, he replied, the paper towel was easier.” And there you have it, I’ve created a paper towel monster. After all, kids mimic their parents. So, my challenge to use fewer paper towels is not just about me – it’s about getting the whole house on board. But change for the better isn’t usually all about one person any way, is it? It’s about not only working on yourself but imparting information and education to those close to you so they too can rise to the occasion and make solid choices. So, we’ve all got work to do. Do I believe we can we help our planet one towel at a time? I do, I really do.

Shop for Swedish towels locally at The Blue Awning in Cambridge and Garden Treasures in Easton.

YouTube: How to use one paper towel with Joe Smith.