The authors of a new book, A Guide to Harriet Tubman’s Eastern Shore – The Old Home Is Not There, have combined their years of experience in history and the environment to gather the accounts of the people who have personally experienced the native land of Harriet Tubman in Dorchester County. 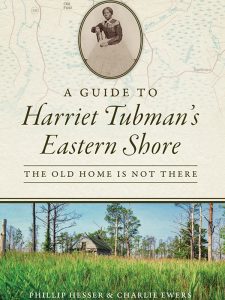 “The people who have lent their words to our book represent a broad cross-section of people on the Shore and elsewhere who have lived in or known Tubman’s ’native land.’ They speak to many of her experiences coming of age in Dorchester County,” notes co-author Phillip Hesser, Ph.D., a local historian who has taught at Salisbury University and Wor-Wic Community College.

“They demonstrate how Harriet Tubman became a hero on the Shore for her prevailing over slavery in a harsh Eastern Shore environment and for her leading family and other freedom-seekers ‘over the line.’ ”

Co-author Charlie Ewers, a writer/photographer and environmental studies professor at Salisbury University, adds, “The landscape of Harriet Tubman’s Dorchester County has been transformed because of economic change and sea-level rise. But the native land of Harriet Tubman can be seen in the accounts of the people who have shared their stories with us, whom we recognized at this book launch.”

Phillip recalls that he found a quote from the Harriet Tubman Byway about how Harriet Tubman’s landscape was virtually unchanged from her time, and this got him thinking.

“It wasn’t virtually unchanged. Many of the buildings had been replaced and the land was being used in a different way. So, I wanted to get at the question of ‘in what ways is it unchanged from the point of view of the current landscape?’” he says.

“As an environmentalist, I was also interested in what’s happening to the land and this vanishing landscape due to climate change. “The native land of Harriet Tubman is vanishing,” Charlie adds.

“We didn’t necessarily have a definite plan for who we are going to contact to be in the book, but we had people we thought had engaged with the landscape, in different capacities – from the point of view of growing up in Dorchester County and from the point of view of working and or connecting with a particular landscape. The accounts represent a diverse representation of the people who inhabit that landscape today. The landscapes actually inspired them to some extent in what they said,” Phillip says.

The book gives an overview of the landscapes Harriet Tubman inhabited – the ones that are accessible and the ones that are on the Underground Railroad Byway. As a guide, it takes people across that landscape, with reflections and photographs, and suggests to them what they might see that is an echo of her time.

“Harriet Tubman’s story has gone along two tracks – one through very meticulous research sometimes done by private individuals, sometimes done by government, and then the other track is people’s family stories or the stories they’ve heard from neighbors. We tried to create a sort of intersection of those types of stories,” says Phillip.

The book includes reflections on the seismic events such as people moving to the city, where there were more opportunities, in the early 20th century. The Civil Rights Movement in Dorchester County is another one of these events leading up to Black Lives Matter.

“And you’ll see a very evocative photo of downtown Race Street with the Black Lives Matter mural by Charlie that accompanies a reflection. These moments have created tensions that have created turfs of viewpoints. And by bringing the people together that we have brought together, we’ve tried to create a single landscape that people share. They may share it for different reasons. They may share it with a slightly different view toward Harriet Tubman. But sharing that landscape we think may be one of the most important things that we can point to in the book. And that that may help to inform the future,” Phillip explains.

“We got a very interesting story along the way from one participant about being one of the first African Americans to integrate into the white high school. We couldn’t expect to know where we were going to come out on the other end. We just latched on for the ride and the ride was amazing.”

Copies of the History Press book will be available for purchase at the Harriet Tubman Underground Visitor Center Gift Shop, Walgreens, or Vintage Books for $24.99 each. All author proceeds from the sale of the book go to the Friends of Harriet Tubman Underground Railroad Visitor Center. For further information, visit https://www.arcadiapublishing.com/Products/9781467149297.