Every Memorial Day weekend, for the past 41 years, Chestertown has celebrated its colonial past with a festival that provides fun for thousands of visitors. The Chestertown Colonial Tea Party Festival will take place this year on May 26 through 28. 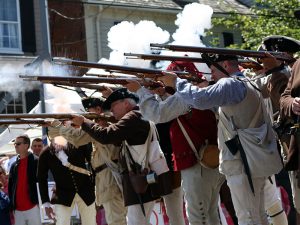 The Festival commemorates events that took place in 1774. When the citizens of Chestertown learned that the British had closed the port of Boston in retaliation for Bostonians dumping tea into the harbor, they issued “The Chestertown Resolves” that stated that is was illegal to import, sell or consume tea. According to local lore, on May 23, 1774, the citizens’ of Chestertown gathered at the town center, marched down High Street to the brigantine Geddes and tossed her cargo of tea into the Chester River.

The weekend starts on Friday evening with a Street Party at the foot of High Street from 6 to 9 p.m. Admission is free. Food and drinks provided by Kent County’s food trucks will be available for purchase. 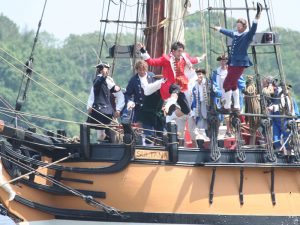 Saturday, May 27 is the main day of activities. For the athletes among us, the day starts with a classic distance run (5K or 10 miles). The next big event, the Colonial Parade, begins at 10 a.m. and the Tea Party re-enactment, the highlight of the day, is at 2 p.m. Re-enactors will debate the British actions. After they have announced the “Chestertown Resolves” they will march down High Street to the Chester River, while coming “under fire” of the Redcoats. Eventually, the Colonists will row to Chestertown’s 18th century replica tall ship Sultana (standing in for the original Geddes) and throw its cargo of tea overboard.

Throughout the day, visitors can also enjoy walking tours of the historic district, demonstrations of colonial crafts, a wine village beside the town dock, more than 100 craft vendors, local foods, children’s activities and a wide array of musical entertainers.

The festival concludes Sunday, May 28 in Wilmer Park with wine and beer tastings, more entertainment, crafts and food. The popular Raft Race is the main event at 2 p.m. Teams compete to keep their home-made raft afloat for as long as possible in hopes of winning the coveted Tea Cup.

For more information about the Chestertown Tea Party Festival, including a schedule of events, visit www.chestertownteaparty.org.