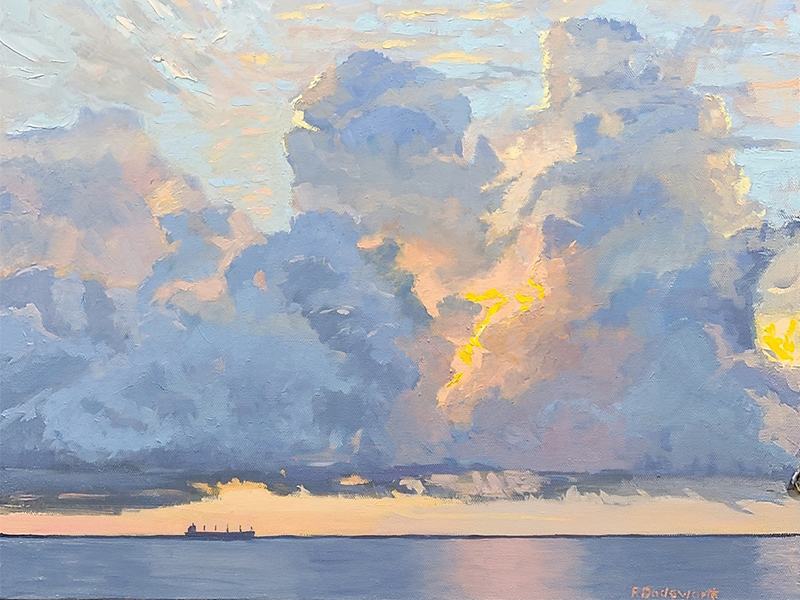 Freeman Dodsworth’s newest work in oil will be featured in The Artists’ Gallery throughout the month of October. The paintings in “Confluence” depict the coming together of things and their abiding together for a time. Light and dark, river and marsh, man and nature. This coming together can be peaceful, as when a boat floats on a slack tide, or possess the potential for extreme violence unleashed in a bolt of lightning. Sometimes in apparent stillness, the confluence of man’s creations and those of nature reveal a slow struggle, one in which the vine and root inevitably win. Freeman’s paintings interpret the laconic settings of the Tidewater region of the Chesapeake Bay, its rivers and farms and the sometimes uneasy but always beautiful relationship that man has had with it for over 400 years.

Freeman is a painter who lives in Port Republic, Maryland. He began painting in the 1980s, studying under the accomplished Eastern Shore artist, Terry Wolf. After three years of working with Terry, he left the Shore for a career in the U.S. Navy. The Navy took him around the world and away from art until 2017, when Terry Wolf passed away, spurring Freeman to return to his easel.

Freeman explains, “Terry gave me the gift of painting, and when he died, I felt I needed to get going if I ever wanted to grow into the painter I wanted to be. I did it, in part, to honor Terry.”

Since then, he has painted consistently, training with nationally respected artists Peter Fiore, Kami Mendlik and Joe Pacquet. In addition to exhibiting paintings in The Artists’ Gallery, Freeman’s work hangs in the Northend Gallery in Leonardtown, Maryland.

The public is invited to visit The Artists’ Gallery for an opening reception on First Friday, October 1 from 5 to 8 p.m. for light refreshments and to meet the artist. The Artists’ Gallery is located at 239 High Street in Chestertown and is open Tuesday through Saturday from 10 a.m. to 5 p.m. and Sundays from 12:30 to 4:30 p.m. For more information, call the gallery at 410-778-2425 or visit www.theartistsgalleryctown.com.