On June 10, Pickering Creek Audubon Center’s Tour, Toast & Taste will be held at Chip and Sally Akridge’s home, Harleigh, on Oxford Road. The event will afford guests a rare look inside Harleigh and a great opportunity to socialize and add culinary adventures to their social calendars for the next year. 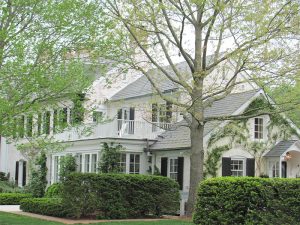 Fronting a tranquil Eastern Shore tributary of the Chesapeake Bay, the property’s original clapboard farmhouse dates to the mid-1800s. But it wasn’t until 2007 “when we realized that we’d be happy to die here,” Chip says, that the couple initiated an extensive renovation with the Baltimore architectural and design firm Johnson/Berman.

The team lavished equal attention on the estate’s grounds, which swelled as the Akridges acquired surrounding agricultural parcels that had been destined for high-density residential development. These days, a stroll around the property reveals areas of horticultural identity that are distinct and yet expertly play off of each other to create one of the most enchanting residential gardens of the Chesapeake region.

The half-mile entrance drive sets the tone. In springtime, it’s flanked by an astounding sea of hundreds of thousands of daffodils, originally planted more than a century ago by a mistress of the house, who was also the founder of the local garden club.

Another member of that family designed the English-style formal garden. Under Sally’s direction, the beds are now resplendent with hostas, roses and stunning ornamental onion blooms that suggest an explosion of purple summertime fireworks. “This whole place is a canvas for almost any kind of expression,” Sally says. “We like to honor those who were here before us because we’re just custodians for a while.”

Anyone who has visited Monticello would feel a strong sense of déjà vu on the opposite side of the house, where Chip has modeled a huge kitchen garden and perennial bed after the ones tended by Thomas Jefferson at his Virginia home. Starting uphill and sloping toward the water, 29 raised beds sprout strawberries, sweet peas, collards, okra, heirloom tomatoes and Chip’s favorite, popping corn. “When I was growing up, my grandparents were big garden folks,” Chip says. “We always canned vegetables and it stayed with me.”

Beyond the vegetables are swaths of red poppies and chamomile in four small wildflower meadows, a transitional zone to the estate’s less-manicured environs. The Akridges have turned two-thirds of the commercial agricultural acreage back into wildlife habitat. “I’m a wing shooter, and the number of ducks, geese, dove, pheasant and wild turkeys we now have is amazing,” Chip says. His efforts to reestablish the bobwhite quail have earned multiple recognitions from Quail Unlimited.

Tour, Toast & Taste begins with a guided first floor tour of Harleigh. On the tour, docents will discuss the history of the home and the notable renovations and improvements the Akridges have accomplished to make it the outstanding place it is today. Both Chip and Sally will be on hand to answer questions. The tour concludes as guests exit onto the back porch of the home, overlooking the Tred Avon River.

At the conclusion of the tour, guests move to the spacious lawn behind the home overlooking the Tred Avon River. Guests will enjoy cocktails and heavy hors d’oeuvres while signing up and purchasing dinners and events at a wide variety of special locales that will be held throughout the year. Dinners and events ranging from classic gourmet meals to themed ethnic dinners, local and historical specialty dinners, brunches and crab feasts will be available for purchase. There is something for everyone and they all benefit the conservation education work that is conducted daily at Pickering Creek.

The evening concludes with a special presentation of live raptors of Maryland by naturalist and friend of the Center, Mike Callahan. Mike is an expert on barn owls and raptors and introduces the public to them through his work with the Southern Maryland Audubon Society and Charles County Public Schools. Guests will have an opportunity to learn about the birds and see them up close.

For over 30 years, Pickering Creek Audubon Center has provided environmental education opportunities to students of the Eastern Shore, moving them from awareness of their watershed to conservation action in their communities. Since establishing a well-reputed elementary education program in partnership with Talbot County Public Schools 25 years ago, Audubon has added meaningful watershed experiences for middle and high school students to our continuum of education along with community outreach education about our regions unique saltmarshes. Pickering Creek reaches the people of the Eastern Shore throughout their academic careers outdoor learning experiences that encourage them to continue interacting with the outdoors frequently.